As many of us have such breeds or are contemplating them for future homesteading needs, I thought it would be nice to have a thread dedicated to them and folks who have them or breed them can contribute and teach us things.

Here's one of the best vids I've seen lately on LGDs...just a simple little vid that explains a few things and is very accurate.

Puppies are wonderful, cute, fun, lovable, and then they turn into adolescents that are a PITA! LOL But don't dump them for doing something dumb. They seem to have an attack of stupid around 9-11 months old and may chase lambs, kids or chickens. They need to know that such behavior is not acceptable, they need positive reinforcement and don't give up on them. Training, training, training. Repetition, repetition, repetition. Then all of a sudden, the light goes on and they got it.

Just because they are Livestock Guard Dogs, don't dump them in a pasture with livestock and leave them there. These dogs are not magic, they are dogs. They appreciate time with you and they love attention. Yes, they have the bred in instinct for over 2,000 years to take care of their livestock. But they still need guidance from you so set them up to succeed and praise their efforts.

LGD's are worth their weight in gold! 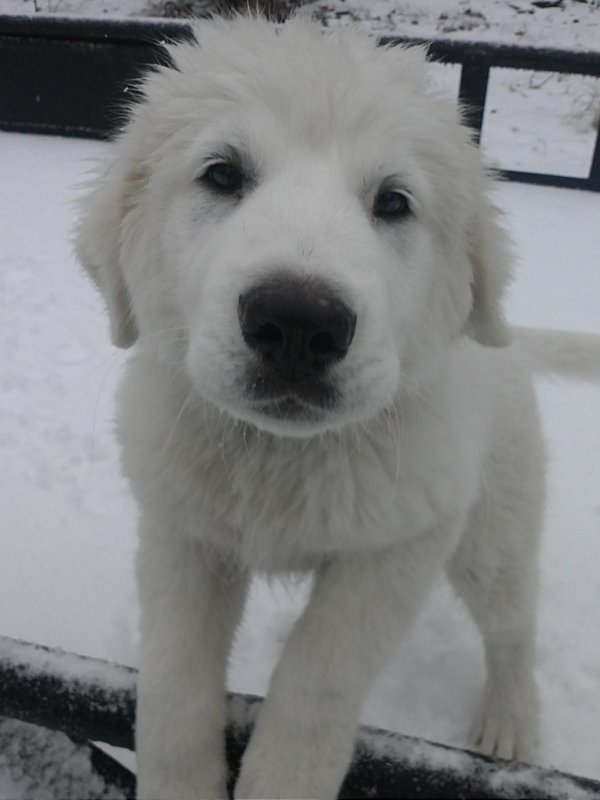 That pic says it all...never seen a LGD pup yet that wouldn't melt yer heart with that mug! So easy to want to give in to all the puppy behaviors one would do with a pet breed...letting them jump up for pets when they are that little, letting them chase and bark at things like squeaky toys, kittens, chickens, etc. because it's so darn cute when they are little and just bumbling along, letting them stay in the house because they are so little and cute and they might get scared out there by themselves, blah, blah, blah.

Unfortunately, though one can still give affection to them, there must be some rules right off with the dog they will become in your mind. Now, I don't agree much with the folks who say you can't train a LGD on regular obedience...I think it's imperative to do so, as one day this is going to be a huge dog with a very independent mindset and a job to do that requires it be suspicious of anything new on the land~people, animals, kids, etc.

It's also something that comes in handy if you have to take that working dog to town for vet care....there should be some familiarity with leash training, obeying simple commands of sit, lie down, leave it, come, load up, etc.

For most of us, we will likely be using these dogs on small homestead situations, so they will be working closer to the home and family than those out on large acreage. That's a game changer, especially when they have to be around smaller animals on the homestead like chickens, ducks, cats, house dogs, etc. That requires a little more hands on work while they are young to acclimate them with what is expected in those situations.

I agree with the lady on the vid about exposing the new pup to the livestock they will be guarding immediately they come to your place. The sooner the better and under controlled circumstances so you can conduct how that first meeting goes. So much will be determined in that first meeting, from how they view the other animals to how they see you in the hierarchy on the land.

I don't agree with penning them with or near the livestock while unattended in the first week or so unless you've laid that very important groundwork and can supervise subsequent exposure between the two animal species. Unattended pups have plenty of time to develop bad behaviors towards the chickens, sheep, etc. like running the fence, barking, lunging, etc. at them without a single word of correction for that behavior.

Ben arrives at 2 mo. old, never having been anywhere near any chickens or even other livestock. 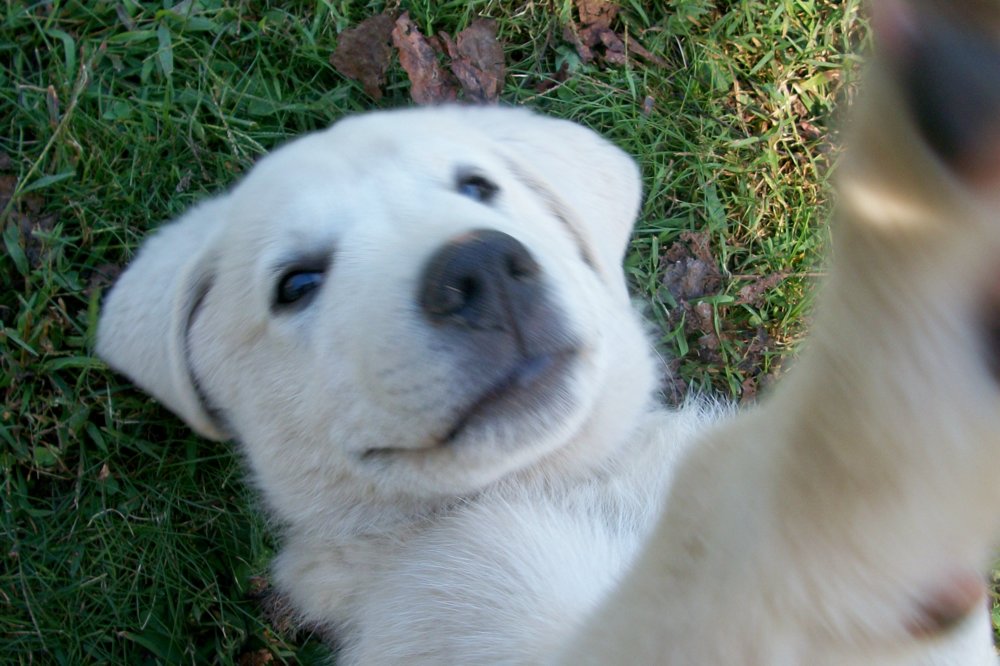 Good video in a lot of ways. My biggest objection to it is when she said you might have to keep a dog in the kennel, in the pasture with the critters for up to 18 months to 2 years. I know she wasn't talking about full-time...but if you can't trust your dog before 2 years then he's not doing much for you. My GP Maddie was with the stock full-time at 4 months. Cowboy was out at about the same age. He had Maddie to guide him so it worked well.

I remember when I was waiting to get Cowboy and everybody wanted to know which pup I was gonna get. Some warned me not to do this and not to do that... and I understand and appreciated all the advice I got. BUT, my belief is that you can't pigeon hole these dogs. Some are meant to be watchers - some are meant to be patrollers - some are hands on - some are 'big picture' dogs. You aren't going to change the instincts that are bred into the dog.

Learn your dog. Learn their strengths. Learn the weaknesses. Use the dog in the way that they can serve you best. Sometimes you just have to trust the dog to know what he's doing. Cowboy, when young, was a fence jumper - but he stopped and didn't jump for nearly 6 months. When he started jumping again it was because we had a bobcat that was taking baby pigs. After I 'allowed' him to jump out of his pasture into the neighbors pasture and mark that area - we didn't have another problem. He knew what he needed to do and he did it. Problem solved.

I think one of the most important things to look for in a pup is one that is submissive to the stock. My does even look sideways or shake their head and Maddie and/or Cowboy will basically hit the dirt. Cowboy loves the babies and has assigned himself to them. Wouldn't do much good to try to kick him out in the big pasture when we have babies in the barnyard because he wouldn't do anything but go back with the kids.

I've found Maddie curled around a doe that was trying to kid about 10 days early. She literally laid down next to this pygmy doe and stayed with her all night - sharing her body heat and keeping the other goats away. Most of the time Maddie is a "big-picture" LGD and doesn't interact personally with the goats - but that night she did. She did what she needed to do to take care of that doe.

I am constantly amazed. These dogs can be such amazing partners.

Learn your dog. Learn their strengths. Learn the weaknesses. Use the dog in the way that they can serve you best. Sometimes you just have to trust the dog to know what he's doing.
Click to expand...

I so agree with this!!! When I got Ben and was set to train him on chickens I got all kinds of advice and predictions about what to expect...but I knew what I expected from him and I knew the breeds' capabilities, so didn't listen much to most of the predictions and only some of the advice.

He was good on free ranging with the chickens within a week of arrival at 2 mo. of age and hasn't harmed a chicken yet, here at 2 yrs of age this month. I think all these dogs are individuals, as are most creatures, and each need strong guidance and a clear picture of what you expect. Consistency with that, calm leadership and patience with their thought processes...Ben needs a moment to obey on some things and you can see him working it out in his mind as to what I want and why I want it before he complies, but it's usually mere seconds before he gets it. Sometimes he's way ahead of me and is anticipating what I want.

excellent thread bee, I've had lgd's for almost 20 years and couldn't do with them. most of those years I had Anatolian shepherds but a few years back switched to maremma's. I absolutely love the way they tend their stock by staying right with them.
agree with everything you, baymule and FEM have said so far.

goatgurl said:
excellent thread bee, I've had lgd's for almost 20 years and couldn't do with them. most of those years I had Anatolian shepherds but a few years back switched to maremma's. I absolutely love the way they tend their stock by staying right with them.
agree with everything you, baymule and FEM have said so far.
Click to expand...

What did you like about the Maremmas that made them ideal for your situation?

most people say you need a patroller and a watcher and that is pretty much what the Anatolians did. don't get me wrong I loved them and they worked well for years but when it came time to add a new dog to the herd I did some studying and learned the difference between a flock dog, like the maremma, and a lgd that patrols. the Anatolians covered the whole 60 acres and some say that is a good thing but I got to thinking that if they were out patrolling and something came after the sheep and goats the dogs would have to race thru thick brush and trees to save them whereas the maremma's stay right with the flock, always within sight of them. for the most part my property is pretty untamed and they just work better for me with the high predator load i have here. the way you describe ben's attitude i've always thought he took after his maremma relatives more than you think.

I didn't know Anatolians were such roamers! I'd always read they were close in flock guardians, staying with the flocks better than GPs. It sounds like Maremmas would be perfect for folks with poultry to guard.

What Ben traits do you see taking after his half Maremma mama? It would be interesting to note that as he grows up.