I have a thread on BYH about my feeder pigs. I asked Sumi if I could copy and post it here and she said yes. I won't copy the comments, but will only post my own posts. We called for a slaughter date, the closest we could get is August 29! I didn't want to keep hogs all summer. So we have slaughtered our own. We raised feeder pigs in the Fall/Spring of 2015/2016 and it was a good experience. I have found out, in our climate, I can keep pigs warm, but I can't keep them cool enough. Plus in the fall and winter, there are no flies or smell. Win-Win.

So here is my thread from BYH. I will try to correct it as much as I can to make it make sense here.

Monday, February 20th, we bought 3 Red Wattle pigs, 4 months old for $75 each. I found them on Craigslist and we jumped on them quick. Just weaned piglets were listed for $65 to $100! We plan on keeping them probably 3 months and taking them to slaughter. We offered 2 to neighbors and they agreed to pay for their pig and split feed costs. We have a great community!

I have pictures on my husband's phone and will post them later. They are in a half acre pasture that has a patch of woods in it for shade. We went to Tractor Supply and bought a pig feeder. Best feeder ever! The first time we raised pigs, I fed them in a tub. The pigs ate what they could hold, then the crows and birds flew in and ate too. The pigs turned their feed tub over, it got rained on, there was a lot of wasted feed.
http://www.tractorsupply.com/tsc/product/p-2a-economy-hog-feeder

This feeder is a metal hopper with covered top and the feed area has flip up covers that took the pigs about 2 minutes to figure out. And now we aren't feeding the birds! We tied the feeder to a post, so they can't turn it over. I love it!

Red Wattles aren't a common breed, but since they originated in East Texas, they are pretty easy to find. They are friendly. When we raised Berkshire/Large Black pigs year before last, I was never comfortable in the pen with them. I never went in the pen when I was alone. I carried a stick or pipe as they tried to get behind me. I didn't mind loading them up for slaughter one bit!

So far, these are friendly and I don't have that creepy feeling up my back. I think I'm going to buy a long handled brush so I can give them scratches. Since they practically feed themselves, they don't run to a feed can. If they get out, I want to be able to call them, maybe they'll come for a good scratching.

Edited to add; I tried the brush on them, they never cared for it. But we gave them treats, boiled eggs, turnips and garden weeds, so they quickly learned to come when I called!

Another neighbor, Russell wanted a pig too, but didn't have anyplace to put one. He asked if he could get a pig and put it with ours and we said yes. He showed up today with a Hampshire pig that was a show pig cull, he got her for $40. One of our barrows humped her, our gilt ran her around and bit her. She quickly figured out that she is low pig in the pecking order and our pigs settled down.

This Hampshire pig is solid as a rock and she is built like a meat factory. Her front legs are wide set and her shoulders look like a weight lifter's. Her hams are already definitely there and can only get bigger.

I think we'll swap a package of pork chops for a taste comparison. Should be interesting.

It took me a week to teach Russell's pig how to eat from the feeder. She didn't like the lid laying across her shoulders and squatted on her front legs until her chin barely was in the feeder. I lifted the lid for to eat several times a day. Then of course my hoodlums would cruise on over to see what's up and bite her so they could "hawg" the feeder for themselves. We had lots of piggy fun, slapping mine so the little Hampshire could eat. We named her J-Lo after Jennifer Lopez, because they both have BIG BUTTS. We came home Friday and J-Lo had her head stuck in the feeder. I was so excited!

This is going to be interesting. My long legged Red Wattles are built for survival under any conditions, J-Lo is built for a pen-feed-me-water-me life. I figure the Hamp will out weigh the Wattles by butcher day......might just have to get Hamps next go-round.

This is the day we brought them home. While red is the preferred color, there are spotted Red Wattle hogs as well. I got a shot of a wattle. It is a fleshy protuberance hanging down under each jowl.

Here's J-Lo's day of triumph. Eating out of the feeder like a big piggie. 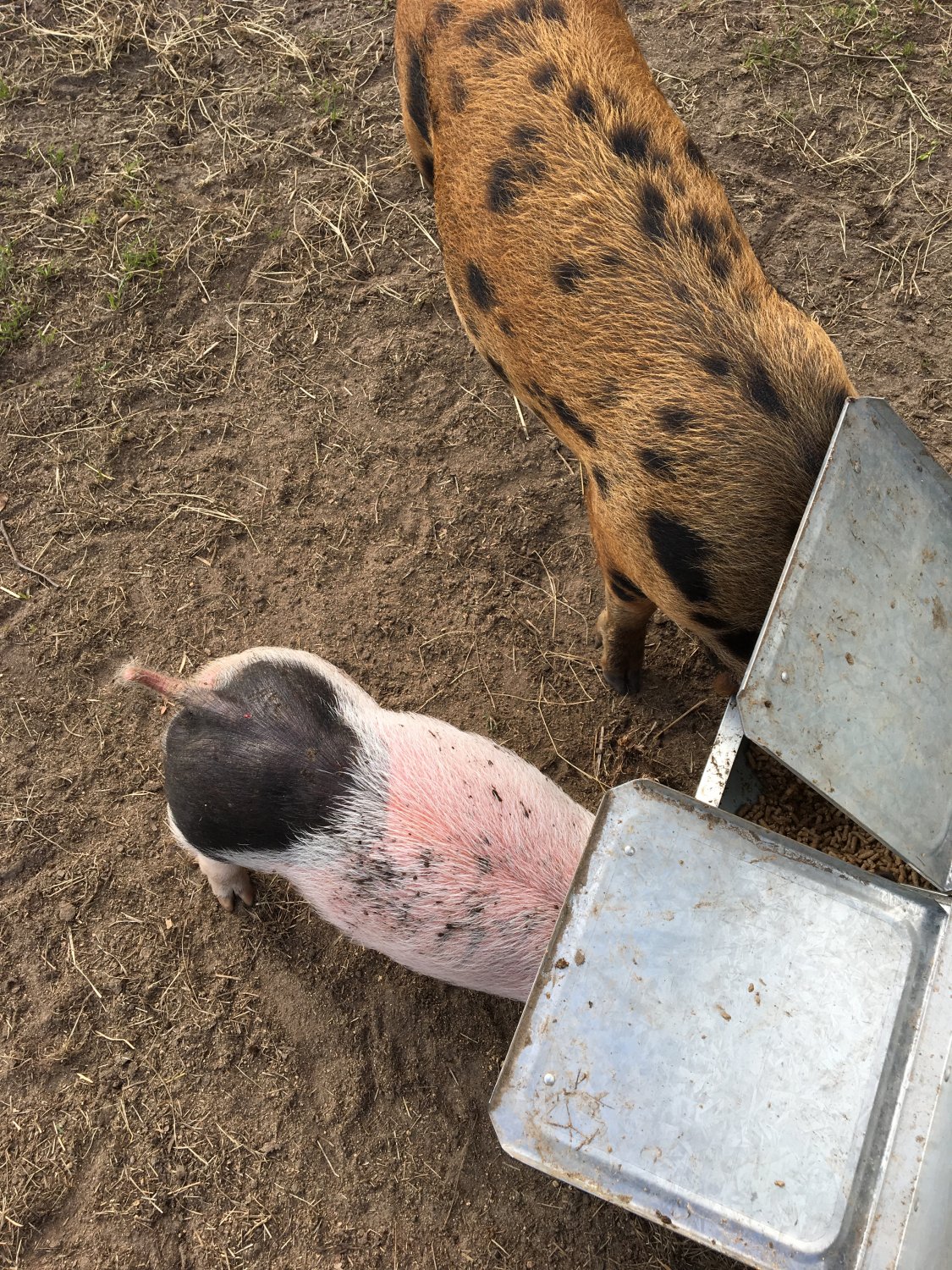 This is the funniest thing! The pigs nuzzle each other with their snouts. J-Lo doesn't nuzzle the Red Wattles, but they nuzzle her and each other. It didn't stop her from her getting a pig snout massage! She closed her eyes and enjoyed her massage! We got a half inch of rain at 4 AM and it came down hard. I took my 3 gallon bucket this morning, and filled it with glass shards, metal, cans and rusted parts from unknown cars that used to run. The pigs root up 60 year old burn piles and the rain helps expose the trash. Makes it easy to pick up!

The pasture where the pigs are has an earthen berm in it with trees growing out of it. Many years ago, there was an old shack here. Back then, there was no rural garbage service, so everyone kept a burn barrel. When the barrel got full of unburnables, it was dumped out, usually in a low spot or in a dug hole. This berm looks like it was bulldozed up and it is full of old trash. By the time we slaughtered the hogs, they had rooted up nine 50 pound feed sacks full of glass and rusted metal, mostly glass shards.

Their mud hole was full of water, so they had an open spa! While Spot was soaking in the spa, Red came over and gave him a snout massage! The closest slaughter date I could get is August 29. These pigs are eating like PIGS!

Since these are "neighborhood pigs" we slaughtered one today. Friday we plan on doing another, I'll do the processing since my neighbor doesn't know how. When I am through with his, we'll do ours. No way I am keeping them until August 29.

Betsy bit the dust today. Our neighbor Robert shot her in the head. He and BJ snatched her out of the pig pasture with the tractor, then we hung her with the front end loader. I washed and scrubbed her down to remove any dirt or mud, then we got busy skinning her. Jennifer is Filipino, under 5' and weighs 80 pounds. Her husband Jimmy is 6'7" and 300 pounds. They have 3 boys. Skinning Betsy wasn't very easy. That pig skin was on there tight and not a lot of fat, so we had to be careful not to cut into the meat. We gutted her and let the guts fall into a big tub. We cut off the loin, shoulders, ribs and hams. We packed them in ice as we went. BJ and Robert were helpful, but mostly they watched in awe as "the girls" tackled that big hog. LOL

Pictures to follow. If you can't handle seeing animals being cut into meat, stop here and go read something else.

There are pictures of a hog being slaughtered and cut up for meat. If you don't want to see it, stop NOW.

You have been warned, so if you don't like what you see, shut up and go whine to someone who cares.


Robert and Jennifer cut her head off and bled her out. Almost got the skin off! My thoughtful husband brought me iced tea and Jennifer a bottle of water, but we never stopped. Robert used his saw-zall on some of the bony parts. It did ok, not great, just ok. Note to self-get a bone saw.

After gutting the pig, I sprayed the carcass to both clean and cool it. For all the flies we have had lately from all the rain, we only got ONE fly, just ONE! Jennifer even brought an old sheet to drape the carcass if needed to keep it covered for flies. But we didn't need it.

I didn't know how to cut pork chops, but both of us have cut the backstrap from deer, so we got after it. We cut the shoulders off, packing in ice as we went. I cut the tenderloin out. Finally there was only the hams left. She wasn't going to try to make ham, so I told her to cut them up for roasts. BJ and I followed her home, unloaded our ice chest and her Yeti ice chest. She got right to work! Her boys were hungry so she put a roast in the oven to cook while she processed meat. I loaned her my meat grinder and she ground the scraps as she went. Tomorrow she'll make a brine for the bacon. We'll smoke it on our pit. Robert bought a meat slicer for this happy event.

One down, two to go.