It's good, and so, so easy. Here is the recipe I found; (I use an erythritol/stevia mix instead of sugar and coconut aminos when I can afford it)
Oba's Shoyu Chicken
12 thighs of chicken (the thighs work best)
2 cup shoyu (soy sauce) *if using Kikkoman, may need more water if too salty. Aloha shoyu is best if you can find it.
2 cup water
1 small onion (or half of a big one)
1 cup sugar (you may want more try taste um ya)

Okay we ready to cook our ono chicken. Put the shoyu, water, garlic, onion, and sugar in a large pot. Heat so the sugar dissolves. Try taste um if it is ono then leave um. If it is sour then add more sugar, too salty then add more water. If the sauce is good then throw in the chicken and simmer about 45 minutes. Serve over sticky white rice. If you like put corn on the side (make um fancy ya).

Continuing work in the garden. Yesterday evening I got the green beans and beets planted before it got too dark. We are supposed to get rain tonight, so that should give them a good start. This year, I planted half the beet bed with golden beets, which I've never grown before. I'm curious if they will grow as well as the red Cylindra beets that I usually grow. I also planted a couple of collards in one corner- it's all that would fit, but at least we'll have a few good feeds off them. I didn't have any seeds started, so I bought a 6-pack from the local nursery. My friends are willing to take the others that I didn't have room for (maybe they'll share later in the year).

We also had to put chicken wire around the rhubarb because the chickens and turkeys keep eating it to the ground. For some reason, I didn't think they would eat the leaves, but they do... with great gusto.

We have one more raised bed that needs soil added, and one old bed that needs weeding and amending and then I'm ready for the summer plantings, which will hopefully happen in the next couple of weeks. The nights have been too cold for them; even though I could cover them they are happier waiting in the greenhouse.

I have something chomping on my chard, and I haven't caught the culprit yet. I tried some squirrel repelling pepper spray and that didn't stop them, so now I'm leaning toward birds. I guess it's time to put up some netting, which I hate because it tangles and gets caught on every little thing.

My spinach decided to bolt. I pulled out all but 3 of them, which I'm going to try to collect seed from this year.

I made a deal with my neighbor to exchange one of my deep purple irises for one of his cool brick-red ones; I don't have anything in that color. I also have 5 irises in pots that wintered over in the greenhouse. So iris planting is on the list today.

Knowing that I'm gonna be tired and sore tonight, I'm going to go easy on dinner-- a Sheet Pan dinner with shrimp and brussels sprouts from the freezer.

Britesea said:
I'm going to go easy on dinner-- a Sheet Pan dinner with shrimp and brussels sprouts from the freezer.
Click to expand...

My flock will skeletonize the rhubarb leaves, especially in the fall. My research states that it makes a great antihelminthic.

Lazy Gardener said:
My flock will skeletonize the rhubarb leaves, especially in the fall. My research states that it makes a great antihelminthic.
Click to expand...

That's good to know, thanks!

It was sunny for a bit today, so I took the squashes and cucumbers outside to start hardening off. Then I spent an hour or so digging up the couch grass in a corner of the garden that had been neglected. Laid down some wood chips and then started filling four large pots to plant my jerusalem artichokes. Eventually I want to have an in-ground patch, but they are invasive and I need to figure out a good spot for them where they won't take over the world. It started to rain as I was finishing the last pot, so I came indoors to dry off and eat some lunch. Next thing I know, it starts hailing. I ran out and rescued the squashes and cukes, getting thoroughly soaked and chilled in the process... but at least the plants look alright The established plants were fine as this was fairly small hail-- the size of the little balls in a bean bag chair. It's supposed to warm up and be sunny for the next 10 days though, so I hope I can get the rest of my garden planted.

Good save! Hope things stay warm for ya!
M

Weather, different areas -- interesting. You have hail, I have 95 degree days here.

Went over to the mid valley yesterday (2 hours one way) for some shopping that we can't get in our neck of the woods. I stopped at a nursery I had just heard about, and found a Witch Hazel and 2 different varieties of English Hawthorn that I couldn't say no to. I'm especially happy with this Witch Hazel because this variety (OzarK) supposedly blooms from February to April. That should catch the earliest appearances of the wild bees in March and April. Since we don't keep bees (DH is allergic so it just doesn't seem like a good idea) I want to encourage as many wild bees as possible. Besides the flowers for food, I plan to set up a bee watering station using one of our old chicken waterers, kind of like this 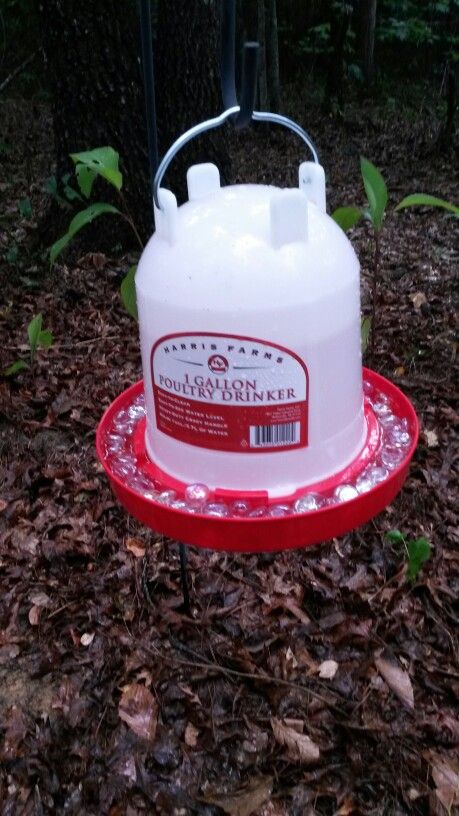 Today I'm not feeling real great... I'm losing the battle against another cold. Huh; after no colds for several years, I end up getting 2 in one month.
Anyway, I got my Delicata squash and Dar cucumbers moved out to the garden. The weather forecast for the next 10 days is highs in the 70's and low in the mid-to-low 40's, so I think I'm safe, although I will still stand ready with my frost cloth if needed.

I'm gonna go take a short nap. See you all.