Stuff adds up real quick these days. I really feel bad for the folks who are on a seriously limited income... it's sad.

Wooooweeee...it's been a long busy day. More freezer cleaning...it's amazing what you find in the back of the very lowest shelf. Ya think cauliflower that expired in 2016 will still be ok? Oh my...

I found some pork chunks I'd put in there back in the fall to be ground. So, I got out the trusty meat grinder and put up a couple lbs of ground pork. It doesn't take up nearly as much room when it's ground and packed flat. When I have more time I'll make some pan sausage.

Got a big batch of that ham luncheon meat in the dehydrator and put a couple cookie sheets worth in the oven. That'll all be ready to grind/powder in the morning. Already have another bag out thawing in the sink to do tomorrow. I'm on a roll!

Started a pot of lima beans this morning and let 'em simmer until they were smooth and creamy and delish. Thawed out some quail and got them marinating in some olive oil and spices. While that was happening I finally put together that low carb lemon cake I've been wanting to try. (YUM!) Then baked the quail with a honey chipotle glaze. First time I've used that glaze and it definitely won't be the last!

Having an adult beverage and thinking the bed is gonna feel really good tonight.

We are trying to get ahead of the next toilet paper panic.

There are no freezers, order one and wait weeks or months for one. Freezers are the new toilet paper. Thankfully, we already have 2.

There are no kids swimming or wading pools. There are a few of the blow up kind, that last about 2 days. I wanted one of those hard side, about 2-3 feet deep, there ain't none. Not in stores, not online, none. Parents have scooped them all up to entertain the kids. I was gonna buy one for the grand kids. Nope. Not happening.


No bicycles, just empty racks. Never thought I'd ever see that! Kids are riding bikes again! It took a pandemic to get kids off their butts and off their cell phones, to go ride bikes!

Very, very few canning supplies. Every time i go to Walmart, that's the first place i go to see what they don't have that i want.

Grocery prices are hitting the stratosphere. FEM you are right about the people with limited resources, it is tough on people and getting worse. I know at least some people are trying to feed themselves. Seed companies ran out or had low seed stocks this past spring. Slaughter places are booked out a year ahead, the price of feeder pigs has hit new highs.

And the virus is rolling around again. Please take care of you and your husband.

frustratedearthmother said:
Stuff adds up real quick these days. I really feel bad for the folks who are on a seriously limited income... it's sad.
Click to expand...

i can certainly get by on not having paper towels or paper plates. we usually have whites to wash several loads a week anyways so having some cloth towels to launder added in is not any kind of burden. i can't even recall the last time we bought paper towels. we have used a few paper plates here or there but mostly what Mom does now is instead of giving away items she bakes in the aluminum pie plates she'll take it out of the plate and put the contents on paper plates instead. the prices and quality of aluminum pie pans have been rediculous. so thin they bend really easy. i told her we should be just buying more glass or metal ones to use instead but that hasn't happened yet.

baymule said:
Please take care of you and your husband.
Click to expand...

That is definitely the plan - hope it works! If we didn't have his mom to take care of we might not leave the house for the next six months!

I'm with you on continuing to keep a good supply of everything. This go round is much worse than the first. Our county has hit record highs for probably 5 of the last 7 days. Sigh...

I wanted a kiddie pool too - can't find 'em anywhere. I picked up another case of jars at Walmart earlier this week. They had a decent supply. I got wide mouth pints.

I still need work done on my house. Need the dry wall folks to come in and do their thing.
I'm in no rush - but sooner or later it's gotta be done.

DH's son is among the newly unemployed. He's hurting. I'll pick up another Kroger gift card for him and get it in the mail soon. A year ago a $100 gift card would be a blessing - now it's barely enough to buy toilet paper.


flowerbug said:
i can certainly get by on not having paper towels or paper plates
Click to expand...

Us too - but they do make life easier, lol. We cut way back on our consumption at the beginning of this corona mess when everything was so hard to find. but, we're back to being spoiled again.

Whew - I've been busy for the past couple days. I've spent most of the time inside - just going outside to feed mostly. I got over 20lbs of the luncheon meat, soaked, (to get as much salt out as possible) drained, chopped, dehydrated and powdered. Amazing to get 10+ lbs of meat reduced to what will fit in a Ziploc bag lol. So, instead of having two huge chunks of frozen lunch meat, as large as a brisket, in the freezer - I got it reduced to two Ziploc bgas - YaY!

Picked up two briskets to grind, but DH...sigh....that man! I had ground some pork and he was being a real sweetheart and was loading the dishwasher afterwards. I noticed him putting the grinder parts in the dishwasher and I told him I always hand wash those. Ok - that really means get those parts the heck out of the dishwasher and hand wash 'em, right? He failed to correctly interpret what I told him and he washed 'em in the dishwasher anyway.... sigh. It caused the aluminum parts to lose their shine and when you try to clean 'em, the rag turns black - over and over and over. We had a "discussion" and he got online and figured out how to get that taken care of. He boiled the parts in some concoction and polished those pieces for a while and they better be good now. I still have lots of grinding to do - but it'll have to wait a couple days. Still need to cut up one of the briskets. Having some issues with my hands so I'm gonna give 'em a break from chopping and slicing for a day or so.

Had a guy who was supposed to pick up some goats this weekend but his schedule changed and he won't be picking them up until next weekend. That's ok - i wanted to do a 3 day worming regimen on them before he gets 'em anyways. Today was the first day of their worming schedule. They're gonna hate me by the third day, lol!

Our men, they just don’t know any better. LOL That’s like putting an iron skillet in the dishwasher. Haha

My husband “helped” me by going through the knife and utensil drawer. Of course there were things in it that were utterly foreign to him and he was fussing about them taking up room. I explained what they were and what I used them for. He said that’s why he didn’t throw them away. But he almost threw away these F’d up knives with no handle, there were two of them. He figured I had some use for them, but with no handles, it was stupid to keep them. I calmly told him that if he had thrown them away, he would have been in a heap of trouble. They were the blades to my electric knife. LOL LOL

baymule said:
But he almost threw away these F’d up knives with no handle, there were two of them. He figured I had some use for them, but with no handles, it was stupid to keep them. I calmly told him that if he had thrown them away, he would have been in a heap of trouble. They were the blades to my electric knife. LOL LOL
Click to expand...

Yep - you'da had to get him for that one, lol! These guys!

Oh- before I forget, This is Belle. Ima sucker for a brindle, lol. 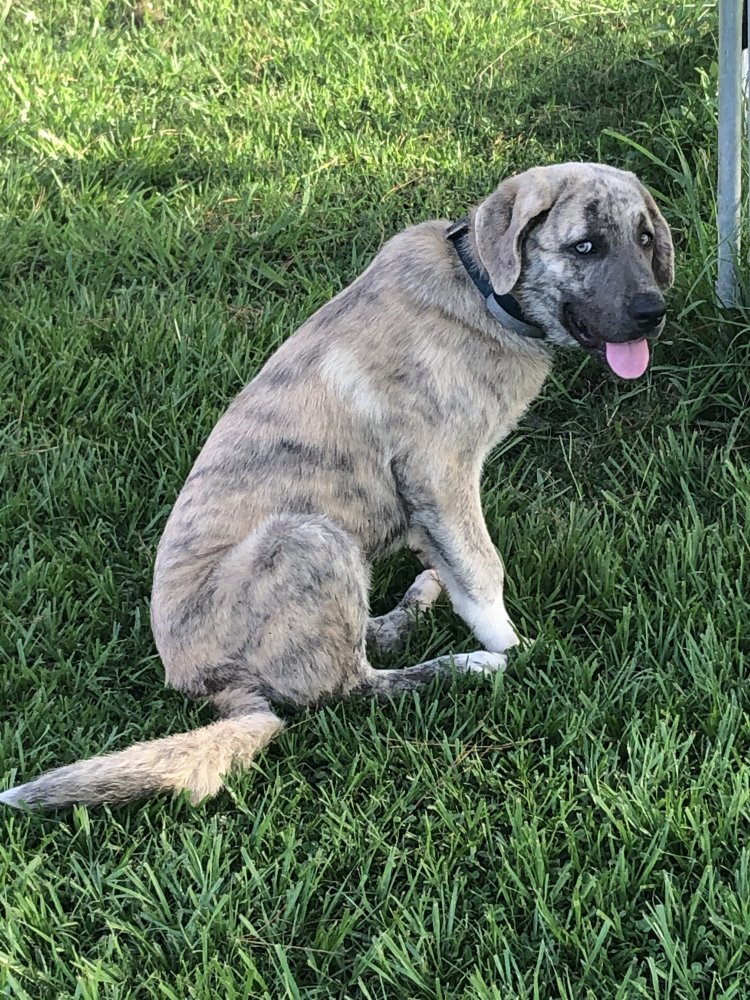