It is going to be REEEEEEELL hard for you to do nothing while you heal up after surgery. You need to give your husband a yard stick to smack you with when he catches you doing something that you are not supposed to do!

Can you freeze goat milk for use when you are not milking?
M

baymule said:
Can you freeze goat milk for use when you are not milking?
Click to expand...

BUT -- will you be able to milk Luna? Or can/will DH do? You may be able to do some of those "light" things..

baymule said:
It is going to be REEEEEEELL hard for you to do nothing while you heal up after surgery. You need to give your husband a yard stick to smack you with when he catches you doing something that you are not supposed to do!

Lol - I would've agreed with you before this morning. Went to the pre-op appointment and was told to stay out of the sun and heat. And I learned something I didn't know - the sun can cause scars to be worse. They can cause hyper-pigmentation of a scar and can cause it to be thicker. Who knew? I have never heard that before so I came home and googled it of course. Google agrees with my doctor.

But the sun goes down and things cool off... just sayin'!

Nope - DH won't be milking. His wrist isn't 100% after his own surgery and the goats think he's a monster and run the other way! But, he's been going out every evening and learning....I'm proud of him.

DH calls out to me that she has a snake cornered. I'm out in the pasture and can't really see so I ask him what kind - he doesn't know. He's not a snake guy. So, I come running up and it's a big ol' cotton mouth. He was about 3 feet long and as big around as my forearm. YIKES! Gracie is circling and barking and pawing and thankfully the snake doesn't strike. I got a stick and tried to pin him down but he was so strong I almost lost him several times. I had to keep re-arranging my stick and he kept re-arranging his body. It was a pretty good stand off. I had DH go get a shovel and I tried and tried to drive that shovel through his neck - but he was so thick that I couldn't do it one-handed. At that point DH goes inside for the "snake-killer" - his 410. That did the trick, lol.

As soon as it's dead I let her have at it. Oh my goodness - she tossed and shook that snake allll over the yard. At one point she flipped it in my direction - oh my goodness - I can still move FAST, lol.

Wow, glad the snake didn't get away!
M

Wow. They can be aggressive snakes. But normally like shade & water/wet areas. First one I ever saw was, as you say, huge body for length...gives me the heebie jeebies just thinking of it.

Bet you did a real TX two-step out there. Glad it ended well.

Was too tired to upload pics last night. But here he is when I first walked up. He doesn't even look very big all coiled up. But look at that diamond shaped head - dead giveaway that he's venomous. (thank goodness for telephoto, lol) When I had him pinned and he was striking at me you could definitely see the white inside of his mouth and the fangs... He could really have done some damage. Glad Ms. Gracie found him. 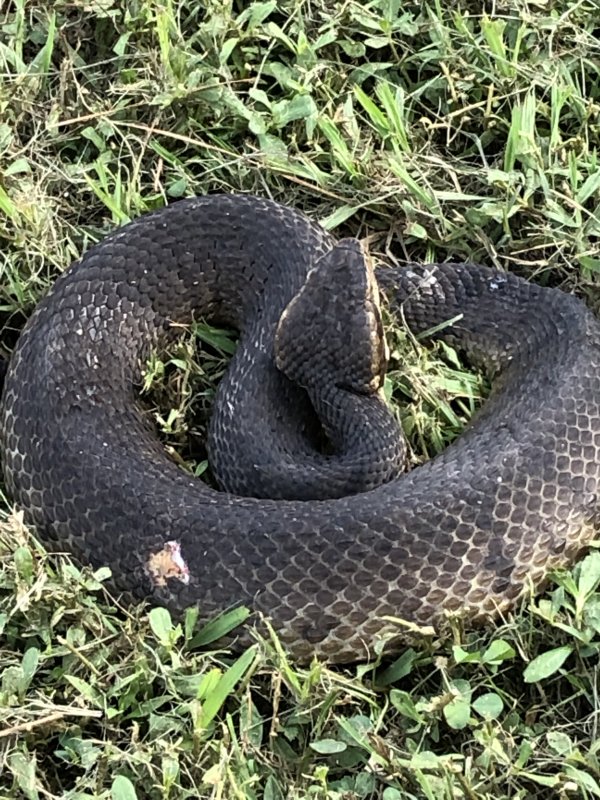 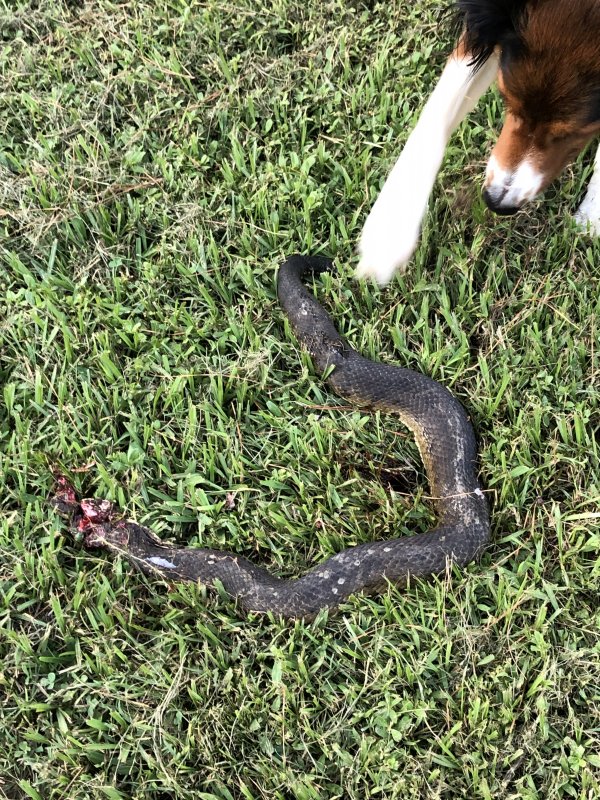 Oh my goodness, FEM! Thank Gracie for finding him and warning you!

Gracie has been on the alert all day. Found another kill of hers...small possum in the same area the snake was. Makes me wonder if they were both going after the possum. Who knows?

Been trying to get 'stuff' done and have made some progress. I've got some meals pre-made and frozen. Just need to heat 'em. I've got some other meals prepped but not cooked. They're in the freezer ready and waiting.

Watching the Texans play right now. It's just pre-season but it's a start, lol.

Plan on doing a whole bunch of nuttin' tomorrow.

A whole bunch of nothing sounds like a good day Hope there will be no more kills by Gracie for the foreseeable future!
M

Rest and enjoy while you can!

Sounds like you know your surgery will have you sidelined for a little while. At least you know ahead and can "plan". Better than an emergency thing -- especially since DH is still on recoup list.

Hmmm....get some movies & popcorn?
Will be thinking about you & hoping all goes well.