Govt Stimulation burning a hole in my pocket.

I tried to get done hogging yesterday, but between talking with Gary and running out of gas, I have about an acre left. Hoping to get that done after work today. You can see what I have left atop "Billy Goat Hill" as my wife calls it. The red arrow points to the acre that's left to hog. The land sure cleans up nice. Hint just because your tractor has head lights it's not a good idea to hog at night. Those headlights allow you to see alright, but they are bug magnets something awful. 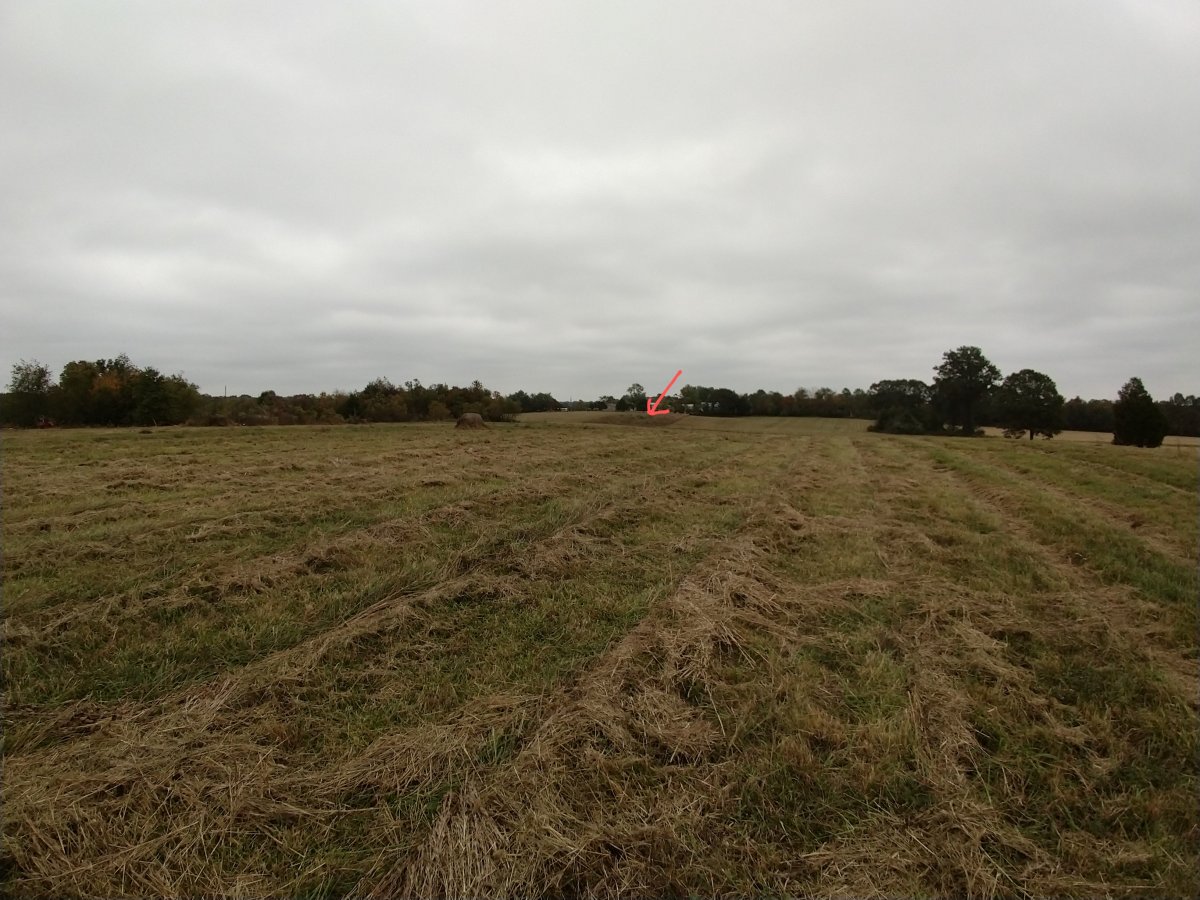 Gary told me, the former owner raped and pillaged the old house that sat in the corner then set it ablaze. I was so looking forward to the old house and what I might find in it. I think I'll add metal detecting around the old place to my list of things to do around here. Probably get thousand of nail hits, though

Why not leave a little long grass areas for the deer to hide in? Hunting season is coming up...
L

Looks like you were destined to buy property adjacent to Gary's. Could be that you and he will form quite the symbiotic alliance.

Lazy Gardener said:
Looks like you were destined to buy property adjacent to Gary's. Could be that you and he will form quite the symbiotic alliance.
Click to expand...

I need hooves on this place sometime aweful. But I got to get at least one pasture fenced in completely and gated. I don't know much about fencing and if I should go with electric or barbwire or both? If I go with barb wire how many runs 3 or 4, same question with electric. It would seem that electric would fence train the animals but what if the power goes out then what? Maybe a solar fence charger with battery might be best? IDK... I need some expert advise.
F

If the animals are quiet and easy going, and have any training to electric, then I would go with that for starters. If they are quiet and don't have any training then still very doable.... Do 2 strands for better control. 18 and 30 inches off the ground or somewhere in that neighborhood. (2 ft and 3 ft). Plug in chargers are cheaper by a long run, and will give a much stronger jolt to get their attention and teach them to stay away from it. I would go with that for starters. You don't have to get the most expensive charger; one that is middle of the road just make sure it is rated for the length - distance that you are wanting to cover. If you make sure that it is not grounded out along the fence, and they get a good zap, then they will learn to stay away from it. The best thing is you are certainly not going to have too many head or overgraze it. They will be in hog heaven for a good while with all that you have there. The biggest thing is get some cheap surveyors tape and tie it to the fence at intervals so both the cows AND the DEER , see it so they can avoid running through it..... posts can be 20 ft apart if you string it tight and hang tape so they can see it. Deer will often go under so no less than 18 inches... but at least this will alert them that there is something there that wasn't there before.

Don't bother with any type of working up the ground this fall except where you are wanting to do a garden or "whatever".... let the grass lay, let the cattle work their way through it. You will have alot of grazing there for quite awhile if it doesn't get snow covered.
After doing the bush hogging, you should have a "feel" for the rough spots that might need to be "disced out". A year or so of haymaking on this will get it back in alot better shape than you can with. with working it up and reseeding and all that. If it were ours, we would keep it bush hogged to keep any unwanted briars/weeds/etc., and let it grow for either hay or bush hogging it off again maybe 2 x next year before weeds go to seed. If the cows do a decent job, I would go through and bush hog it again early in the spring; or later this winter, to "chop up" any thick patches into smaller pieces so that they will fall to the earth more through the grass.... it will feed back into the ground and the organic matter will be good as it breaks down through the earthworm activity. All the nutrients that the grass took out of the earth will go back from the grass going back to the dirt. It is so thick that "chopping it up" more will aid in that breakdown, but give whatever cattle a chance to eat what they want first. What they ingest, will come back out the other end so will be fertilizing it anyway. Maybe not spread out evenly... but still not bad. Get them accustomed to the electric, and you can move it some and let them have more area as time goes on and as you have time and money to enlarge it. I'd let them have a certain area, then enlarge it and let them have more. Rotational grazing is not something to worry about until spring growth... and you can then make the sections smaller, and save a good portion for some haymaking, and still give them plenty to eat.

Since you did not do too close in the "hog lot" due to the ups and downs, the quail will hopefully have enough place to winter over. You might want to talk to a sportsman club or fish & game management.... you might be able to get some help and guidance to maintain some quail habitat.... I know around here there are some incentives to set aside some ground for that as they are very few and far between here.... They are great for keeping some of the bugs down, and you ought to encourage them to stick around by maybe leaving a certain amount of land for them undisturbed.

@farmerjan here is what the place looked like 3 1/2 years ago early spring after the previous owner paid FS (Farm Services) to come bush hog, disc and liquid lime.

The old house that sat in the trees lower right hand corner is gone, the cattle barn upper right hand corner is gone also. You can see the fence row that runs north to south that divides the property in half. It's electric and still there, along with the rest of it. although it's not live and I've picked up so much of it from deer running through it. It's 15 guage, on 6' T post space every 10' apart. I would prefer 11 guage wire honestly. Hopefully now that I have it hogged deer will stop running through it.

The 10 acres, right hand side there is some fence and some not, most of it barbwire on tee post is laying down that I need to mend.

The house is covered by the blue dot.
View attachment 14734

Here is how the electric fence is ran red line, the blue line is where the hog lot used to be it's like 5 runs of heavy barb wire on rail road ties. 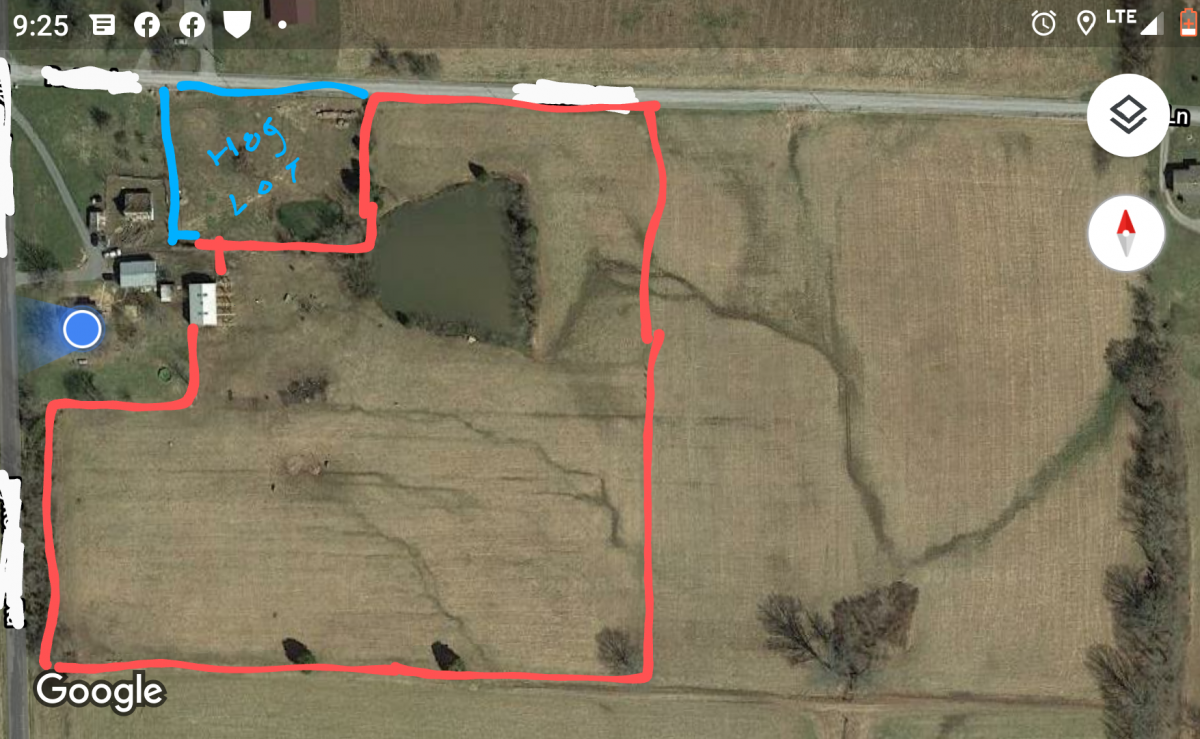 Well.. I went into town with the CFO and what did I see for sale? AC D17, she's the lil sis to my D19. After riding her around (having fun) I bought her, with a contingency...

Parts should be a lot easier to obtain since AC built 84,914 D17's vs 10,591 D19's. Like I said she's lil sis at 63 HP vs 85 HP on my D19. Even at 63 HP she was still designed as a row crop tractor to pull a 5 bottom plow. I thought she's a sassy mini D19 so I bought her (you all know how I like sassy). Again same as my D19, nothing at all wrong with lil sis, except she's missing her rear wheel fenders. The deal is contingent that the fenders be found before I'll pay for her. They took them off when they painted her and now they can't find them. It's no wonder, their barn is a flipping train wreck.

Pics - ain't she cute? But girl put a dress on we can see the inside of your rear tires. 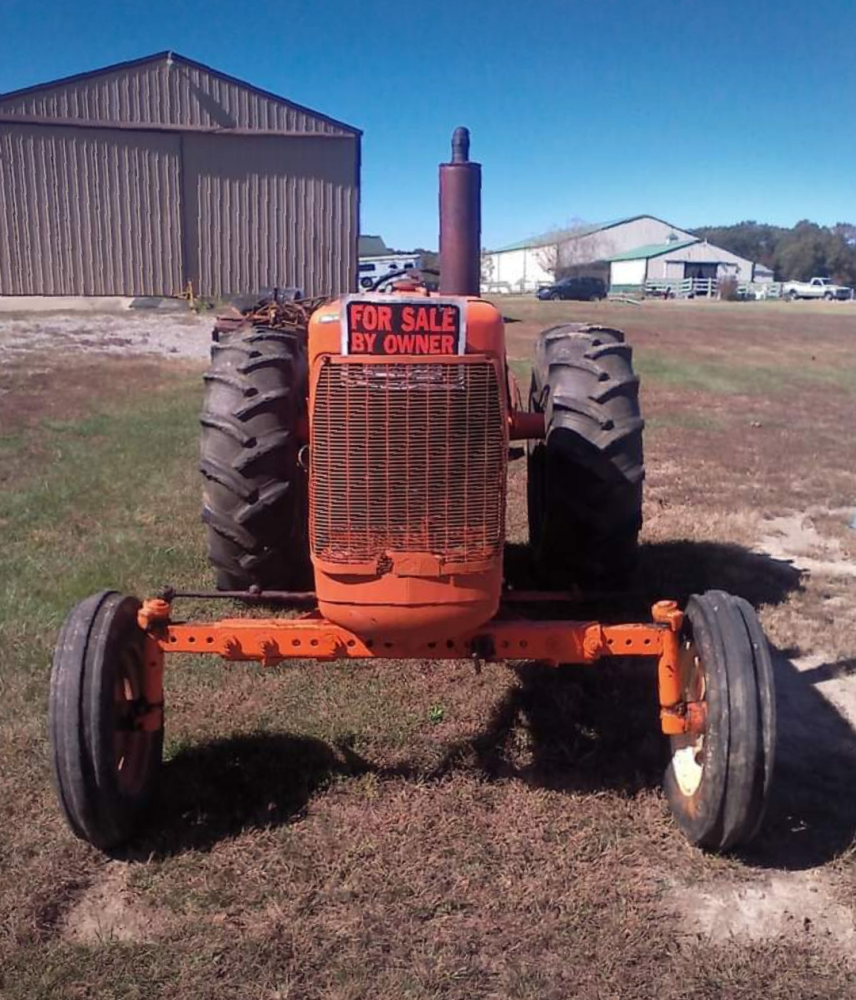 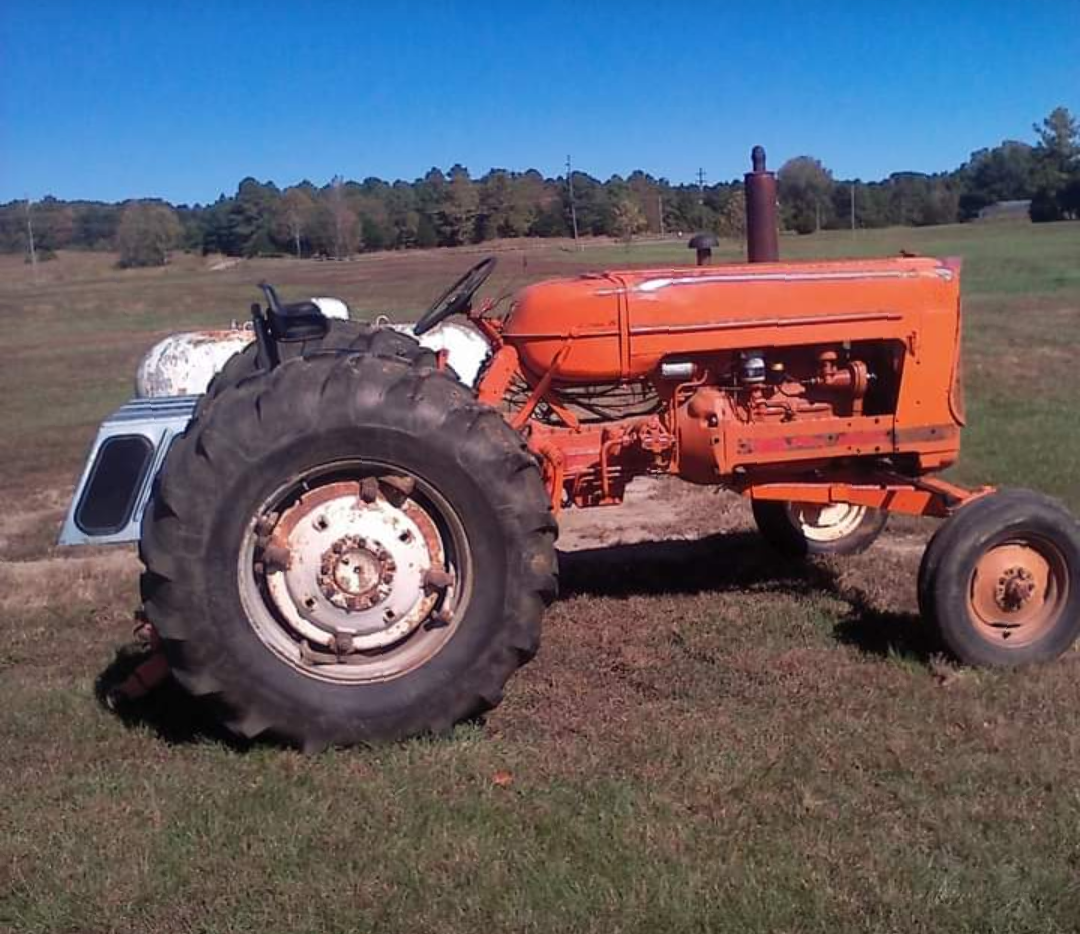 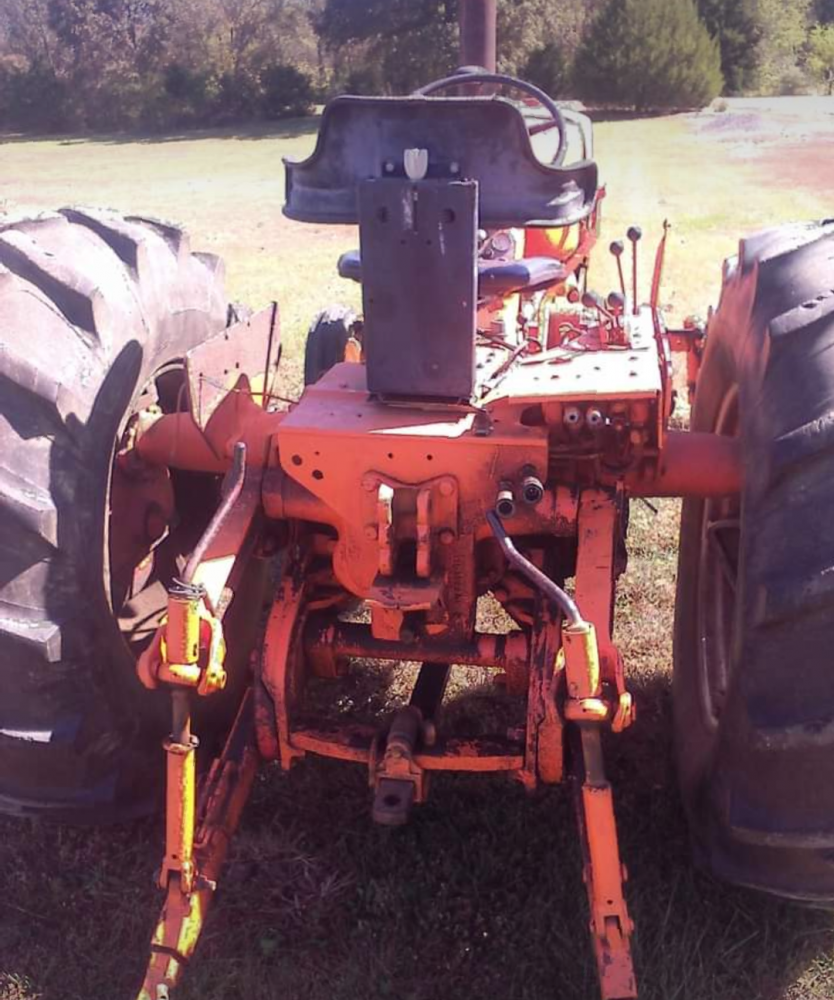 Two tractors? You are on a roll!
M

My thoughts exactly, Bay.....and in only what? A month? Whoooweee.

Mini Horses said:
My thoughts exactly, Bay.....and in only what? A month? Whoooweee.

baymule said:
Two tractors? You are on a roll!
Click to expand...