Have any of you had experience raising guinea pigs for meat? I can't raise rabbits because my sister has a very bad rabbit allergy. My other sister has raised some guinea pigs, but only as pets. If any of you have some advice please share it.
M

There was a thread on BYH not long ago about this. I never even thought about using them this way -- only pets.

BUT then I've seen documentaries in past about how in some 3rd wrld countries they trap & butcher rats for eating...as they ravage their crops.

Personally I am sticking with chicken, pork goat & beef....sometimes lamb. I don't like fish -- but, being coastal, crabs, oysters, clams, etc. are good.

I've eaten cuy (named for the sound they make : cuy, cuy). It's similar to rabbit or chicken, but a little fattier; I've heard it likened to squirrel meat. Anyway, you can eat the whole animal, or if you have a lot of them available (which we did- my MIL had over 500 of the little varmints), you can just eat the hind quarters, which have most of the meat. They are very tasty with Shake n Bake, and I have a recipe for a Squirrel White Chili that they would be fantastic in.

Mix ingredients well and spread over the inside and outside of the animal. Allow to marinate for up to one day to allow flavors to meld. Before roasting, remove excess marinade to avoid scalding. The spit should be inserted into the back part of the animal and exit from the jaw. Once on the stick, tie the front and back feet, stretching out the legs. Put on grill, turning manually. Continue to apply lard to the skin to avoid drying out the meat. The cuy is ready when the skin is close to bursting. Serve with boiled potatoes sprinkled with coriander, chilies, and the following peanut sauce. (rice may be substituted for the potatoes.)

Peanut Dipping Sauce: Fry onions till golden, then add in other ingredients. Cook at low heat for at least half an hour.

They are especially useful for people living in suburban or even urban environments, as you can grow an awful lot of them in a very small space. My MIL's collection was kept in a space about the size of a garage for instance. The reason she had so many was that she was a world-renowned cavy breeder- at least 3 new breeds were developed either solely by her or in collaboration with others. Needless to say, she had lots of culls. Whatever she couldn't sell to the local pet stores, we ate. 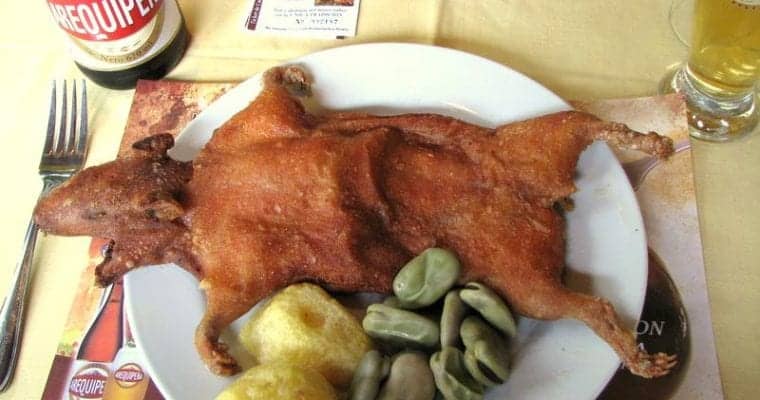 I have guinea pigs and have thought about it. but they have smaller litters, and overall size wise there isn't ass much meat.. now that can be increased if you can find the actual cuy. they are bigger than normal guinea pigs.
You must log in or register to reply here.
Share:
Facebook Twitter Reddit Pinterest Tumblr WhatsApp Email Link