Helped a duck and felt a little bad

Warm day (40s) for winter yesterday and today so I took the opportunity to rake out a bunch of straw mixed with the chicken and duck poop from our fortified (cyclone fencing) small run inside our larger fenced in run (10k sq ft). Our cyclone run is actually two runs (1 = 100sq ft and another (300sq ft)) right next to it with a little framed hole about 20" off the ground that goes between. The hole is meant for the chickens to be able to go back and forth but should keep the ducks on the larger side. So I'm done raking out the larger one so the sun can get at the snow/ice under the crap and move on to the smaller one. I go in there and am working for a minute or so trying to ignore the guniea keets screaming their heads off when I realize that there's one of our peking ducks in there with me. My immediate thought is "oh crap! How long have you been in here without water?!?!" since I wasn't sure if she was only in there today or had gotten in there yesterday and I just didn't notice. Concerned for her health and well-being I chased her around for a minute or so before I caught her, which was a little tough since I had built some "benches" (2x8s that are 10' long) for the chickens that run across the run, so maneuvering in there as a human can be a little tough when you're trying to move in a hurry. So I have her in hand and toss her back through the little hole and smile feeling good about getting her back to water access, etc...

However, we have five ducks, three girls and two boys, so there's one girl that's a loaner and two that are mated up with drakes and this was one of the mated ones. Right as she hits the ground and quacks a bit and waddles off her mate runs up and immediately starts biting at her neck and shoves her down in the mud and has his way with her.

Figured some folks would get a giggle from that. 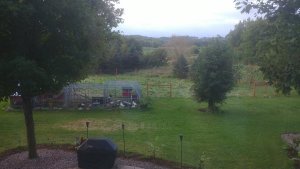 I can just see the look on her face, lol! She probably thought she had a great hiding place until you came along. If she goes back you'll know she did it on purpose!

frustratedearthmother said:
I can just see the look on her face, lol! She probably thought she had a great hiding place until you came along. If she goes back you'll know she did it on purpose!
Click to expand...