I started a mealworm farm in July (end of) with about 1000 worms and one tub to house them in. Worm math have since taken over But seriously I decided to farm them commercially and am now up to… more than 40 tubs with "buggers" in assorted stages and sizes. Please don't ask me how many I have, there are many 1000's lol

There are different ways to go about farming them and everyone you ask will answer you differently, but this is what works for me.

Some basics to farming them, which is REALLY easy, just make sure you pay attention to the don'ts:

Start with a decent number of worms, anything from 500 to 1,000, depending on your long term goals for the colony. I.e. are you farming for your own use and/or selling them.

Get a suitable container to house them in. I'm using large plastic storage tubs, the deeper ones work just as well as the shallower ones, but don't go too shallow, or the bugs may get out. I've been told that worms will eat through wood containers and I think they would be hard to clean out as well, so I'd stick with plastic. I don't cover my tubs at all, but if you have possible pests (spiders, etc) that may help themselves to your bugs, put a mesh or some kind of netting over them.

Once you've got the container ready, pour in some wheat bran, or a mix of bran and oats, about 1.5-2 inches deep. This will serve as both nesting material and food. Place the worms on top of the bran and put a few pieces of fruit/veg in there for extra food and moisture. DO NOT put water in. They don't need it and if they get wet, or too damp, they will die.

Some of my buggers' favourites are apples, carrots, butternut, broccoli and potato. Apples I found is the least wasteful vegetable, potatoes the most. I never clean up after apples, they eat the whole piece. Potatoes I find I need to remove mouldy pieces after a few days. Butternut, except if you're in an extremely damp climate (think coastal Ireland), lasts fairly long before going off. Remove mouldy pieces of veg every now and then and make sure you shake off any tiny worms, eggs etc! Bugs and worms love hiding in veggie bits, so check carefully before you toss it.

Once I have worms growing up in the tubs I supplement them with chick starter crumbles (non-medicated). Powdered milk is also great, but chick crumbs are cheaper for me and at the amounts I'm going through… Sprinkle lightly over the bran, they'll take care of it.

After anything from a day to a week you'll notice the worms are dormant. This means they are turning into pupae. They will stay in this stage for a couple of days before turning into whitish, then brown, then black beetles. Once I have beetles I put a piece of light cardboard over the bedding for them to hide under.

The beetles need moisture from the veggies and fruit, so make sure you put some in there regularly!

After about 2 weeks the beetles will start reproducing and laying eggs in the bran. The eggs and baby worms are really tiny and almost invisible to the naked eye, so do not throw out bedding while there is a possibility of either present. They will be easier to spot after around 2-3 weeks. Once I have babies that I can see, I remove the beetles and put them in a fresh tub, so the littles can grow up in peace. It's not necessary, but there is a possibility of the beetles eating the babies, which I'm avoiding.

After around 4-5 months there will be a good build-up of poop in the tubs which will need to be cleaned out. What I do here is pour the entire contents of the tubs in a fine sieve and put the bugs that didn't fall through the sieve into a fresh tub of bran. Watch you don't breathe in the ensuing dust! It can be harmful. The remains and waste from the tubs I leave for another 2-4 weeks, to give any late bloomers a change to make themselves visible. Waste and poop can be used as fertiliser in the garden, but use sparingly, as it's a bit strong.

When "harvesting" the first worms, leave some to continue their life cycle. The female beetles lay around 200+ eggs each, so there should be a fair number of worms going after the first cycle. I thin my tubs/colonies out once they start growing bigger, to avoid overcrowding and losses.

My worms took about 9 weeks to grow into a decent size, suitable for using as feed/selling. From start (when I bought my first worms) to when I had my first grown worms took 3 months and 2 weeks. The bugs like heat and really motor if you keep them between 80 and 90F. Room temperature is good too, but don't let them get cold, they will go dormant.

If you're lucky enough to have a glut of worms you can keep them in the fridge for up to a month before using them as feed. 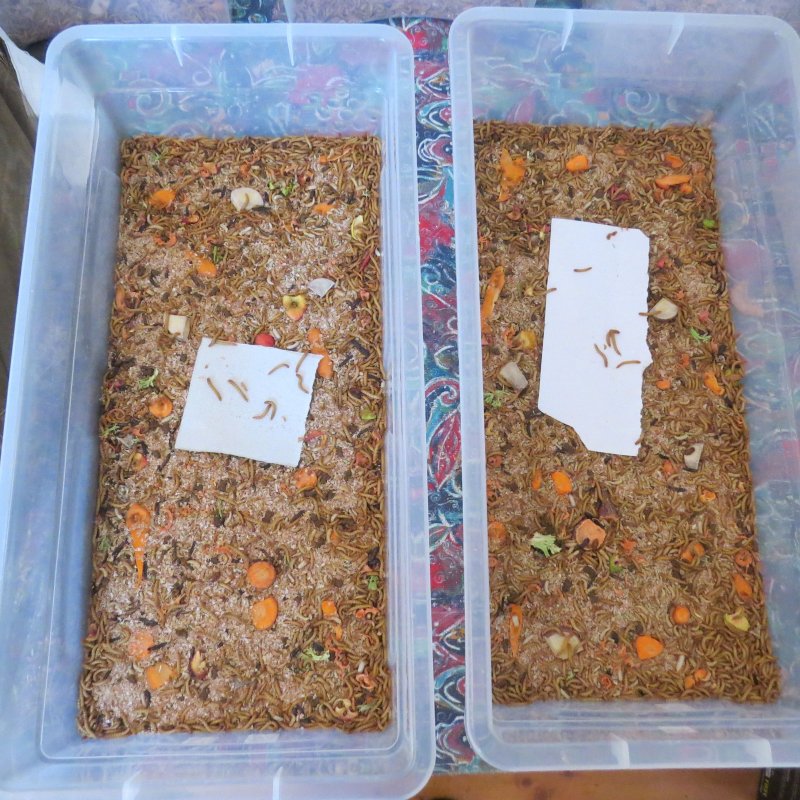 This pic was from the early stages. I feed way less vegetables at a time now, to reduce waste. The white pieces of cardboard is for the beetles. 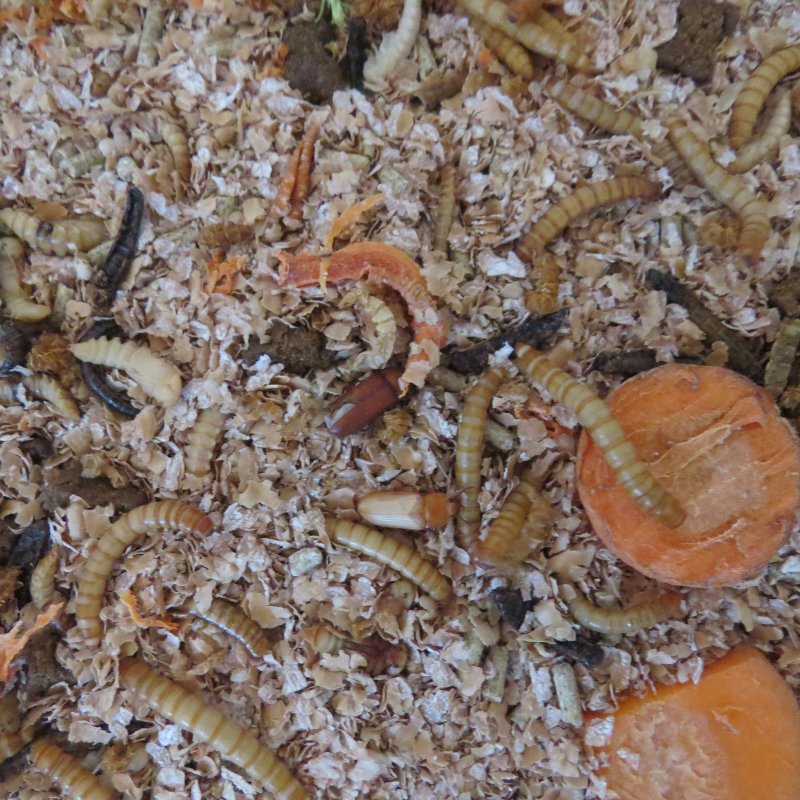 In this pic you can see the different stages, worms, pupae (strange looking white critter on the left) and a new and older beetle. 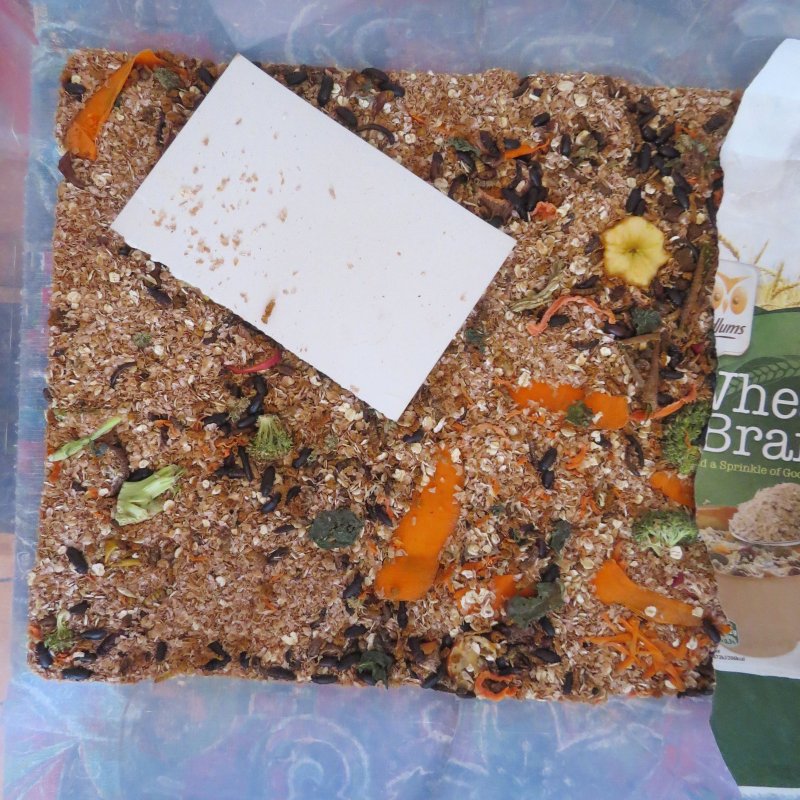 This tub was further along and full of mature beetles. 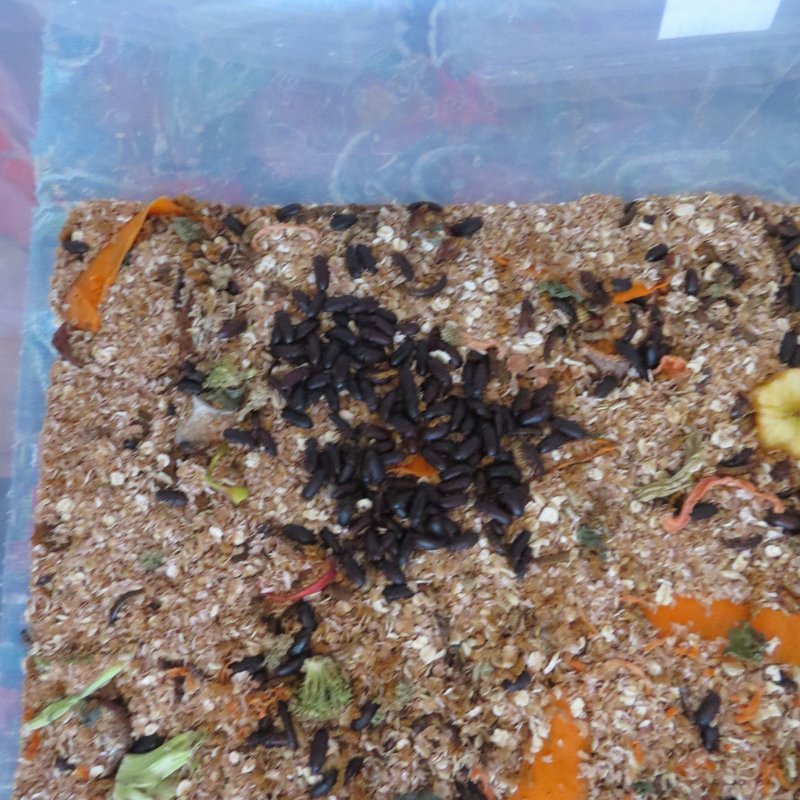 That is so cool - thanks for sharing!
M

I've heard they were fairly easy to raise -- unless you are "creepy" about bugs, etc. My dried bag of them is nice!!

But, they are expensive to buy and winter is when I use them. I read that if you place a piece of apple, etc., they will "hook on" while eating and it's easy to remove that piece of fruit to the chickens. Bet THAT is a chicken riot!! I had given thought to either mealworms or red wigglers in containers in my garage a while back but, instead my son moved in there as a temp. All things considered, the worms may have been more pleasant for me.

I'm going to look at the site. Probably staying with dead & purchased BUT, you never know. Thanks for the details.

You're welcome! I'm not a huge bug fan, but I find the worms quite inoffensive and not creepy at all. They don't bite or do anything when you handle them and the bugs are o.k. too. It's been interesting seeing them go through their cycle, especially when you catch one half-transformed into the next stage!

@Mini Horses if you start now with some and just keep them going until next winter you will have a good supply by then. Mine quadrupled in the 6 months I've had them, but then I did buy in loads. I think in total I bought about 10,000 worms. Hence the 40 tubs to accommodate everyone comfortably now.

Are you selling the worms? What a good "crop" for a small homestead!

Yes, I'm starting to sell them finally. I have a pet shop interested and I'm hoping to get a few more on board soon!

Not long after I posted the above I got a text from someone new wanting worms. They placed an order for 10 tubs for next week and asked about a regular supply. Things are happening!

Congrats. Yes, it could be a nice little sideline business for a homesteader. As we all know, most things start small and often we don't want them to get HUGE -- just comfy for a little income.

In VA we can only sell raw goat milk "for animal consumption" and some work within a "herd share" contract. But, 2 days ago on way to work, DS & his helper came upon an injured owl in the road. Appears it was hit by car and left side is injured. They bring it to ME !?! Well, I can't keep it. But, had them put it into a cage . I contacted a licensed wildlife rehab place that is only 13 miles from me. Then took it to them. While there, I asked about their need for fresh, raw goat milk -- occasional colostrum-- needs for deer. It's that time of year! Yes, they need a source for fresh as the deer do better on that than the powdered products. SO -- I am hopeful that I will be able to sell some goat milk this year. Not looking for huge amount or price but, may help offset the feed bill. That'd be great. Plus it would give me a reason to milk more than one, as well as keep them milking for the training of sale as a milker. I use excess for feeding pigs/chickens, make cheese, yogurt, etc. but my full sized does give over 1 gal per day each....lots!

My hens have been providing sufficient eggs to sell this winter & support their own feed. Plus, we have all the eggs we want with some freebies for friends. A friend of the neighbor behind me stopped when I was out feeding to ask about my AGH pigs -- wants a couple piglets when they farrow this Summer. He has a little "homestead", does layer hens, some broilers, for own use. Wants the organic, healthy we all do. He's even talking about trying the goat milk after they freshen, as they have a couple human kids -- cow is too large for them.
May work into goat sale, too.

This is all falling into place for my 2016 plans to make the farm "support" itself. I am feeling real good with way things are moving along. Gardens -- veg & flower -- should not be a problem to sell as I have some free outlets. Plus, word of mouth. I hope everyone else if feeling positive with their efforts and that some of the situations I have encountered will help another with an idea to expand.

I won't mind if this takes off, but I still plan to do a bit of this and a bit of that on my future homestead as well... Selling eggs, etc. Milk here, same as you, we can't sell it raw, unfortunately, but I think we can barter/trade with it?