Today we leave at 2PM to meet DD halfway, to pick up our granddaughters. That’s a 3 hour trip, maybe longer, we have to go through Dallas and Fort Worth. I’m going out at daylight to feed animals, then again before we leave. Mainly concerned about the Cornish Cross chickens, they EAT! I sure don’t want to come in late, tired and have to go fumbling in the dark to feed. We’ll be home around 9-ish tonight.

Monday we do it again to take them back. So worth it to have our girls for several days.

Have a safe trip and enjoy your granddaughters!

Sheba and Sentry are working today, they are in the garden with the sheep. No, I did not let the chickens out. LOL LOL LOL

Yesterday Dr office called, BJ has a urine infection and the blood they drew for testing clotted up and they couldn’t use it. So we had to go to the clinic for another blood draw, pick up prescription and come back home. Enjoying the girls!

I'm sorry you guys are having to go through this stuff. I hope the hip replacement goes well and he recovers quickly

baymule said:
Yesterday Dr office called, BJ has a urine infection and the blood they drew for testing clotted up and they couldn’t use it. So we had to go to the clinic for another blood draw, pick up prescription and come back home. Enjoying the girls!
Click to expand...

Oh gee whiz! Always something. Hope he gets that urinary issue cleared up quick - that can sure put a drain on the whole system.

Have fun making those pies!!

I’ll post pictures and catch up when I get time! LOL

i like pictures as much as anyone but we don't need pictures of a urinary infection, thanks but no thanks!

j/k, will enjoy the pics you post when you can get to them.

We got home this evening at 5:30 from meeting DD and her husband to return their children to them. We had so much fun with them this weekend!

We made hand pies! I traced the 5 year olds hand on paper. I cut it out and we had a pattern. We rolled out pie crust dough and cut out hands. We put hands on a cookie sheet and put a spoon full of raspberry jam in the palm, then topped with another hand. We squeezed red food coloring on a small blob of dough, mashing it up to mix it up good. Then we made fingernails! 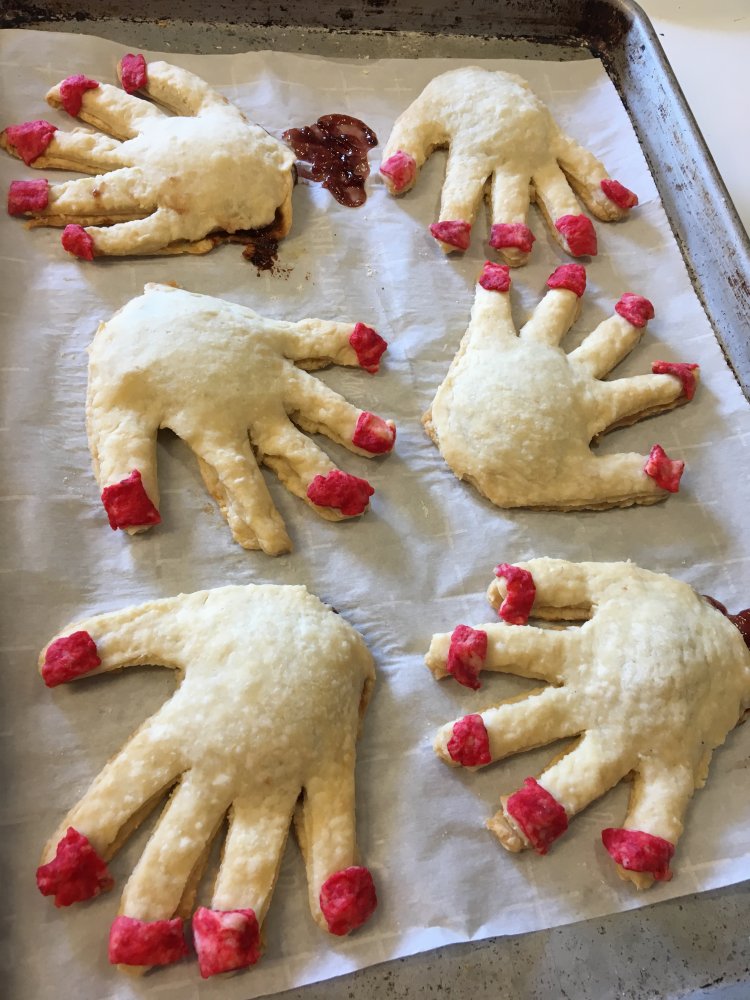 We made some dough squares, filled with raspberry jam, just because it was soooooo much easier. LOL then we rolled out more dough, the girls brushed it with melted butter, then sprinkled cinnamon sugar on it. We rolled it up and they cut it in slices. Yummy! 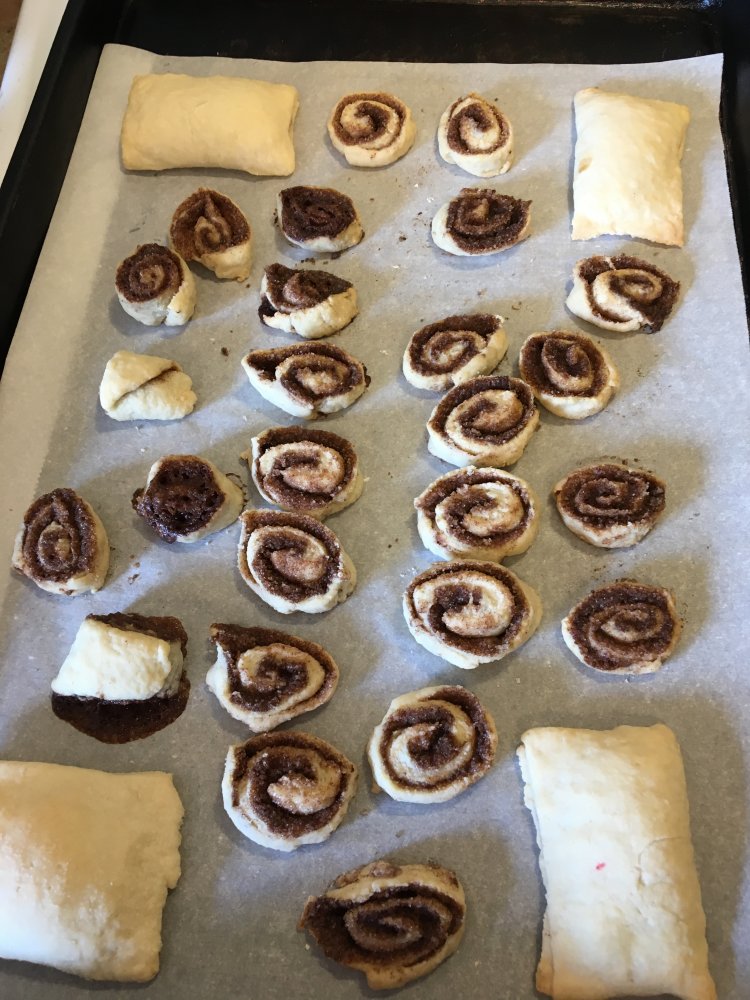 Their teacher at the day care they used to go to is pregnant and having a baby shower in a couple of weeks. DD ordered a present and the girls and I wrapped it up. Then both of them made her cards, laboriously copying letters to get the words right. How do ya like the fancy wrapping paper? 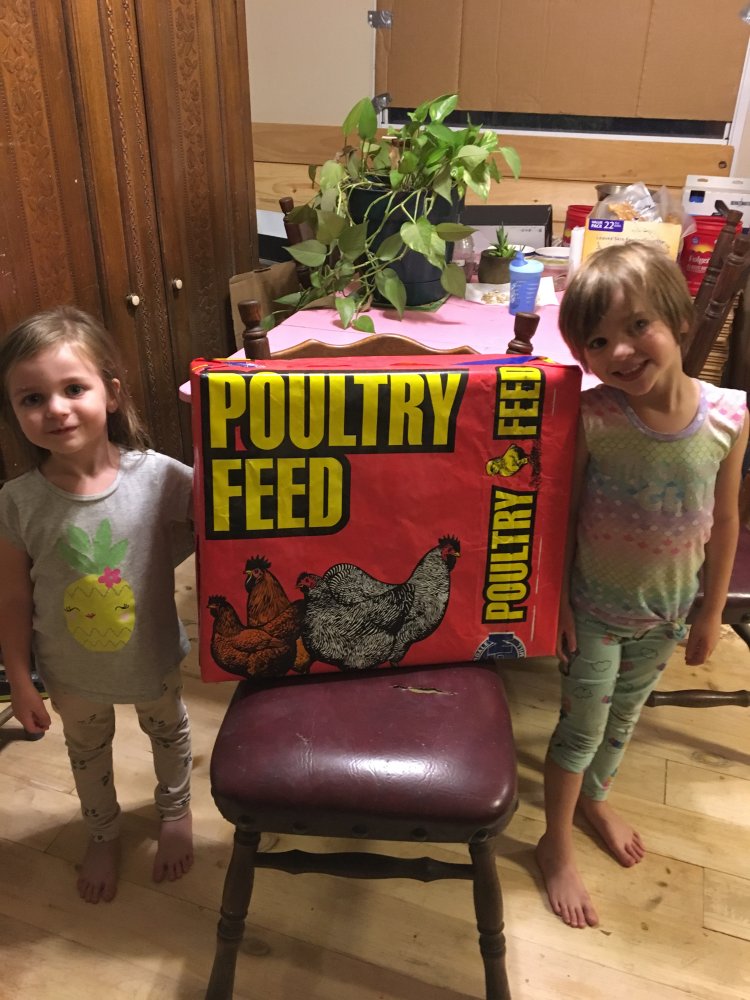 The 13 year old spent one night, then left to go stay at friends houses. So the 4 and 5 year old helped me pick out a Giant Pink Banana Squash to make a pumpkin pie.

We cut it in half, then cut the half in half, lengthwise. We scooped out the seeds to a chorus of THAT STINKS. 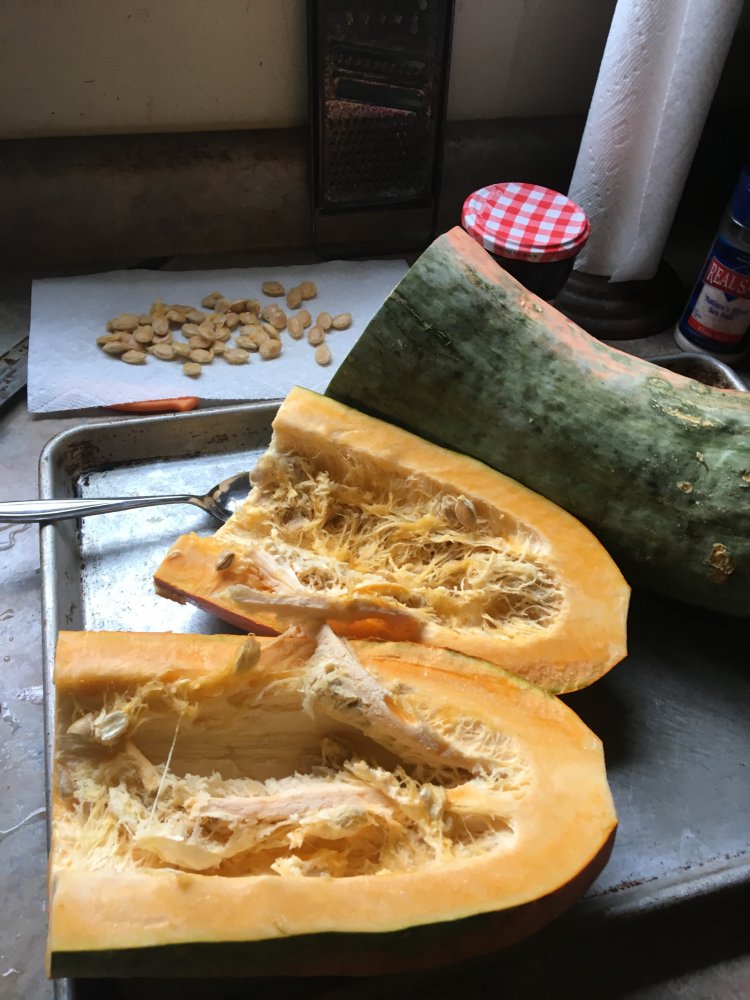 Then I had to peel it. I took a half and cut it in slices. A sharp knife soon removed the rind. 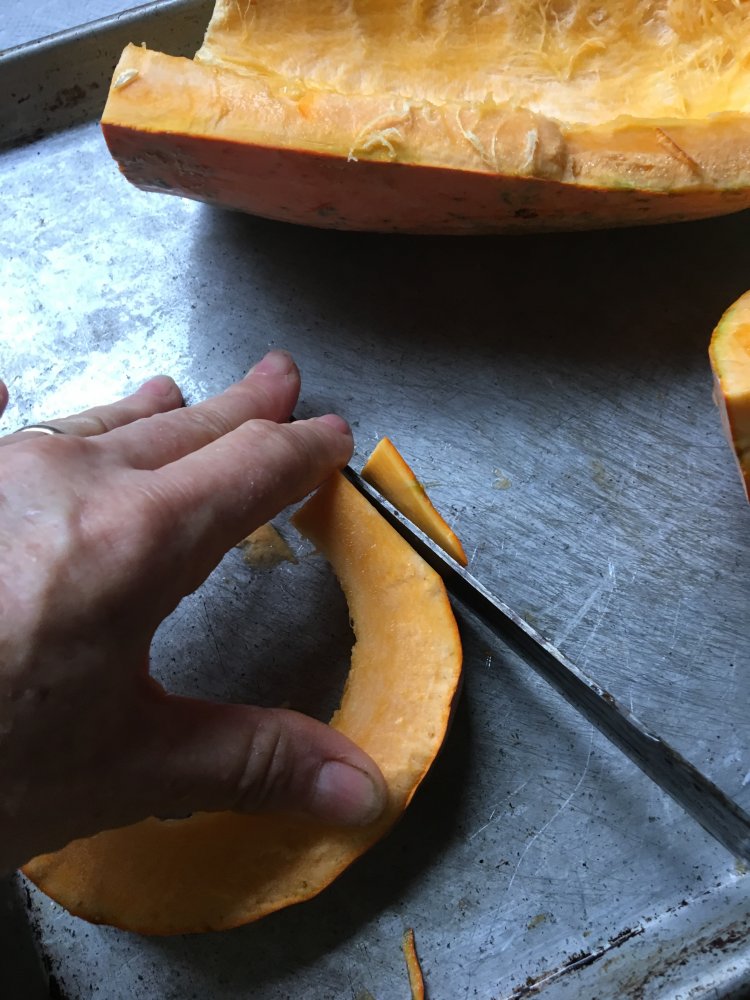 I cut the slices in chunks and put in a pot to simmer. 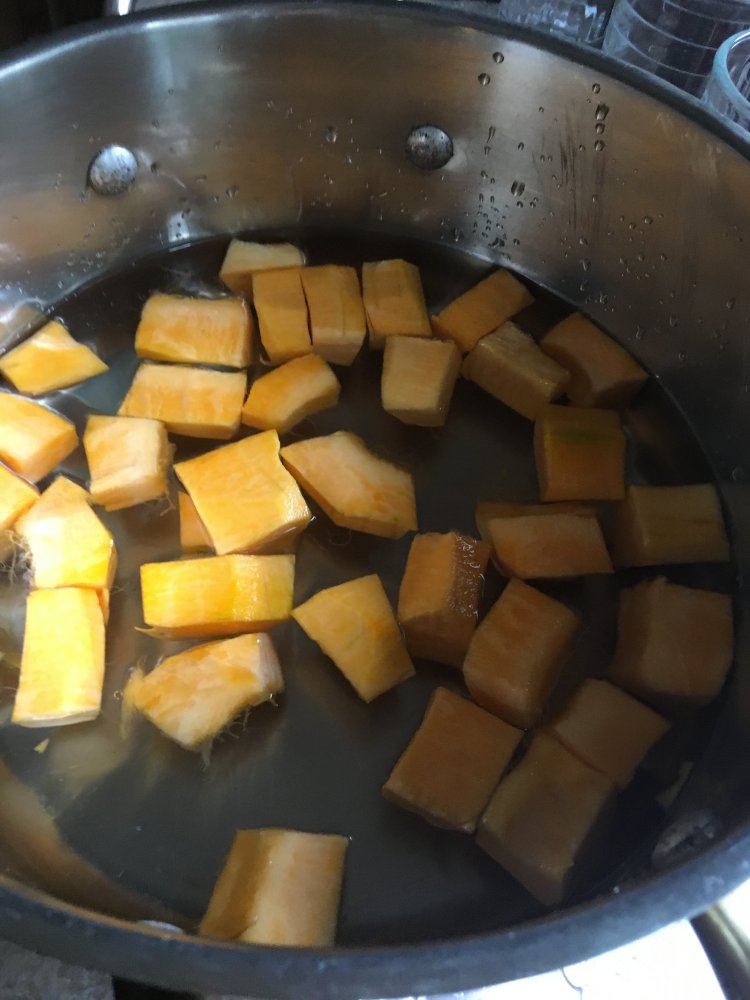 The other half I put cut side down in an aluminum pan. I added a little water and covered with foil to hold in the moisture and steam the squash done. 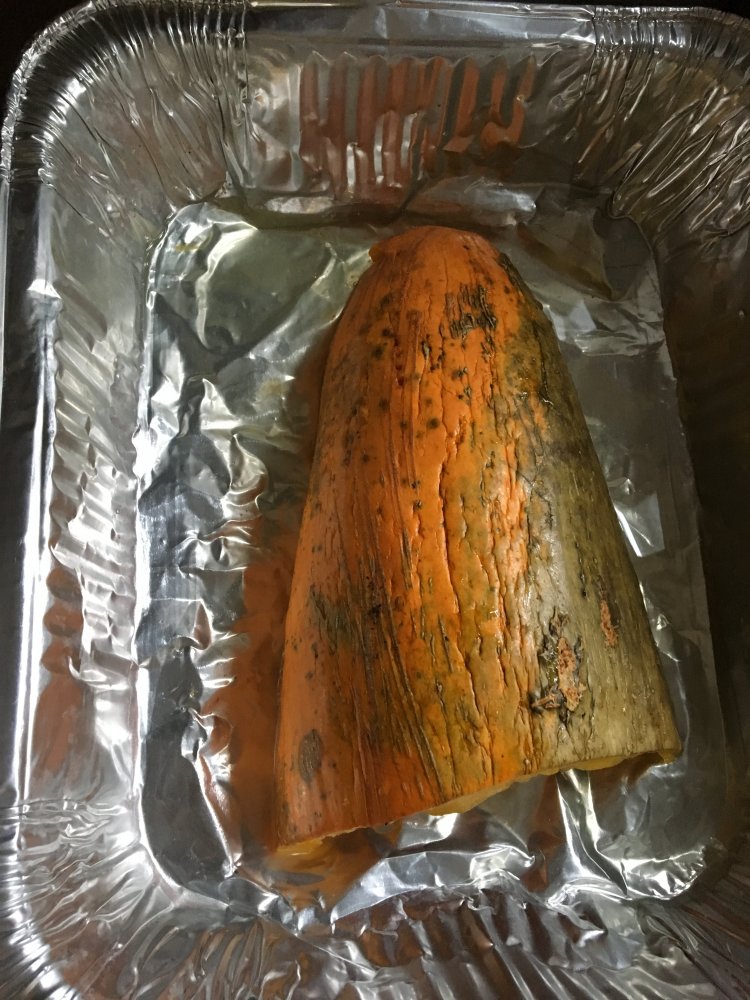 Then with some expert help, we scooped out the cooked squash. 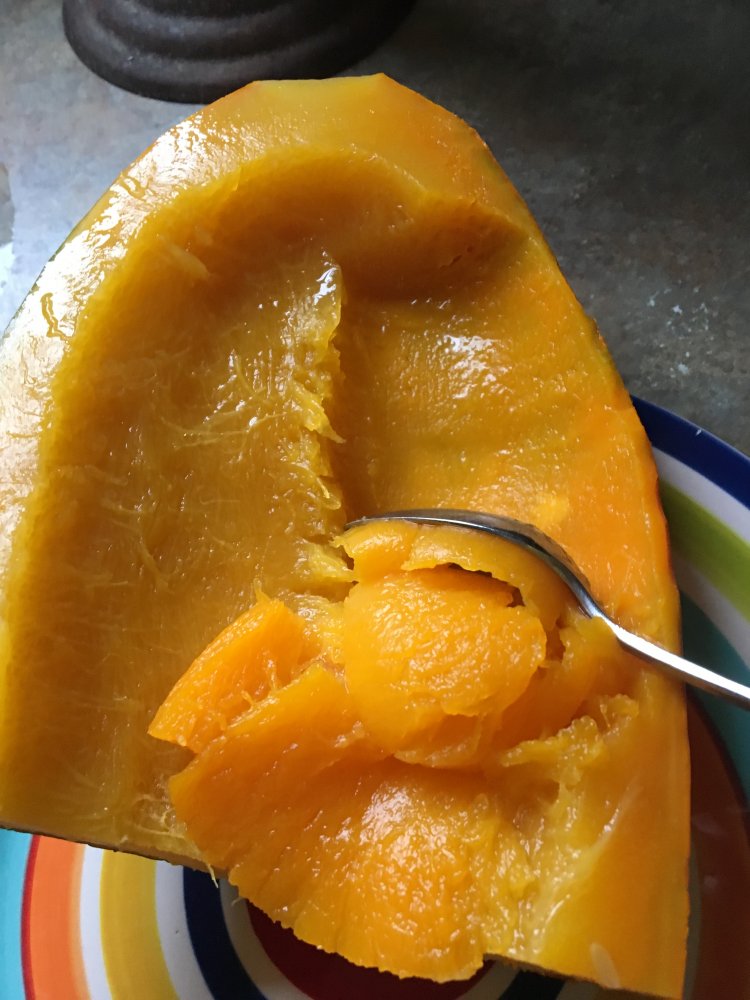 Then we measured out a cup of squash and a cup of heavy cream. For the rest we followed Libbey’s pumpkin pie recipe. We poured it into a pie shell, home made pie crust, and baked it. Mmmmm it sure smelled good!

The little girls could hardly wait, but I told them they had to eat supper first. We made pizzas on flour tortillas with my home grown/made pizza sauce, pepperoni and cheese. Our son had come in and our hay guy delivered hay, mentioned that his wife was gone, so we invited him to supper. The grown ups got onions and jalapeños added to their pizzas.

It was delicious. Best pie ever. 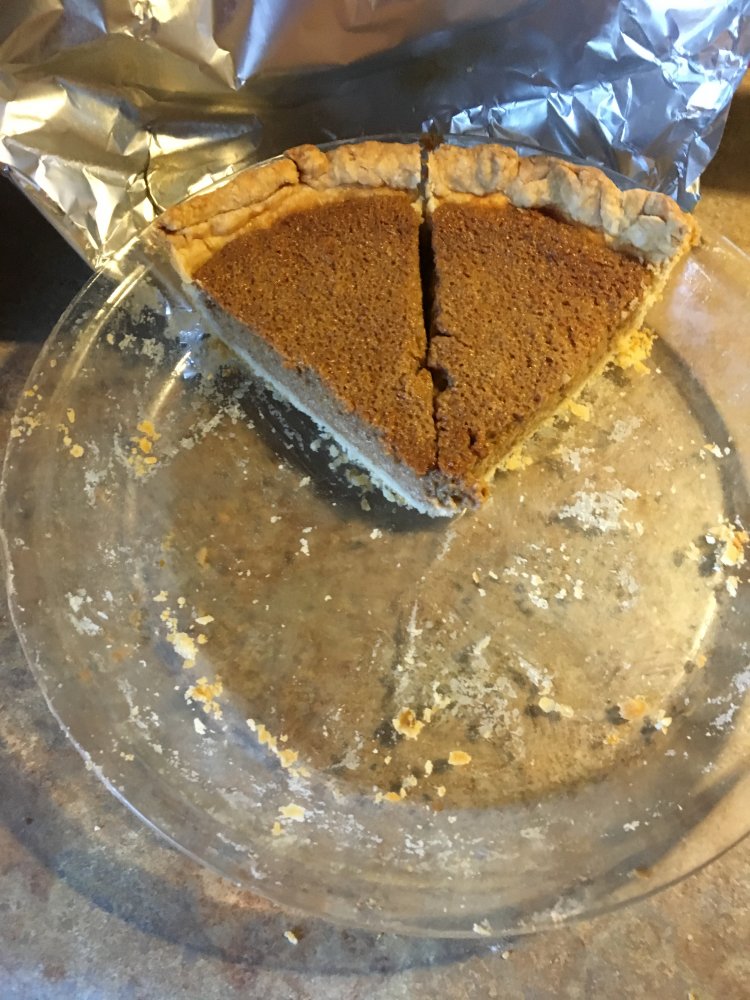 The only criticism I can offer is that the water added in cooking made the squash purée too goopy. The other half of the squash, I roasted it dry, scooped out the squash and it is in the refrigerator. Haven’t had time to try it. We’ll see how that works and if it is thicker and not goopy.
F

Looks like y'all had fun and a great time with the grands. Love the wrapping paper.... and you even got it straight on the package!!!!!
Best of luck to BJ with the surgery. And BOTH of YOU with the recovery!!!!