So everyone I wanted to let you know if you happen to see one of these. Do NOT let it bite you! 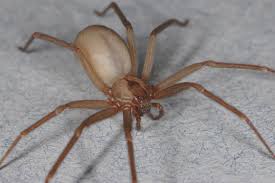 These little brown recluse spiders are some nasty juju! I was out weed whacking 3 weeks ago on a Thursday evening. When I was done I came in the house, took a shower and noticed, something had bit me on my left top side of my my stomach.

I didn't think much of it and put a little triple antibiotic ointment on it. Well come Saturday that bite was crazy big swollen and painful as all get up. it grew to the shape like a soup laddle. It crossed midway to my stomach, then the handle part started climbing up my chest. Here is the picture I took and sent to my doctor in a email. 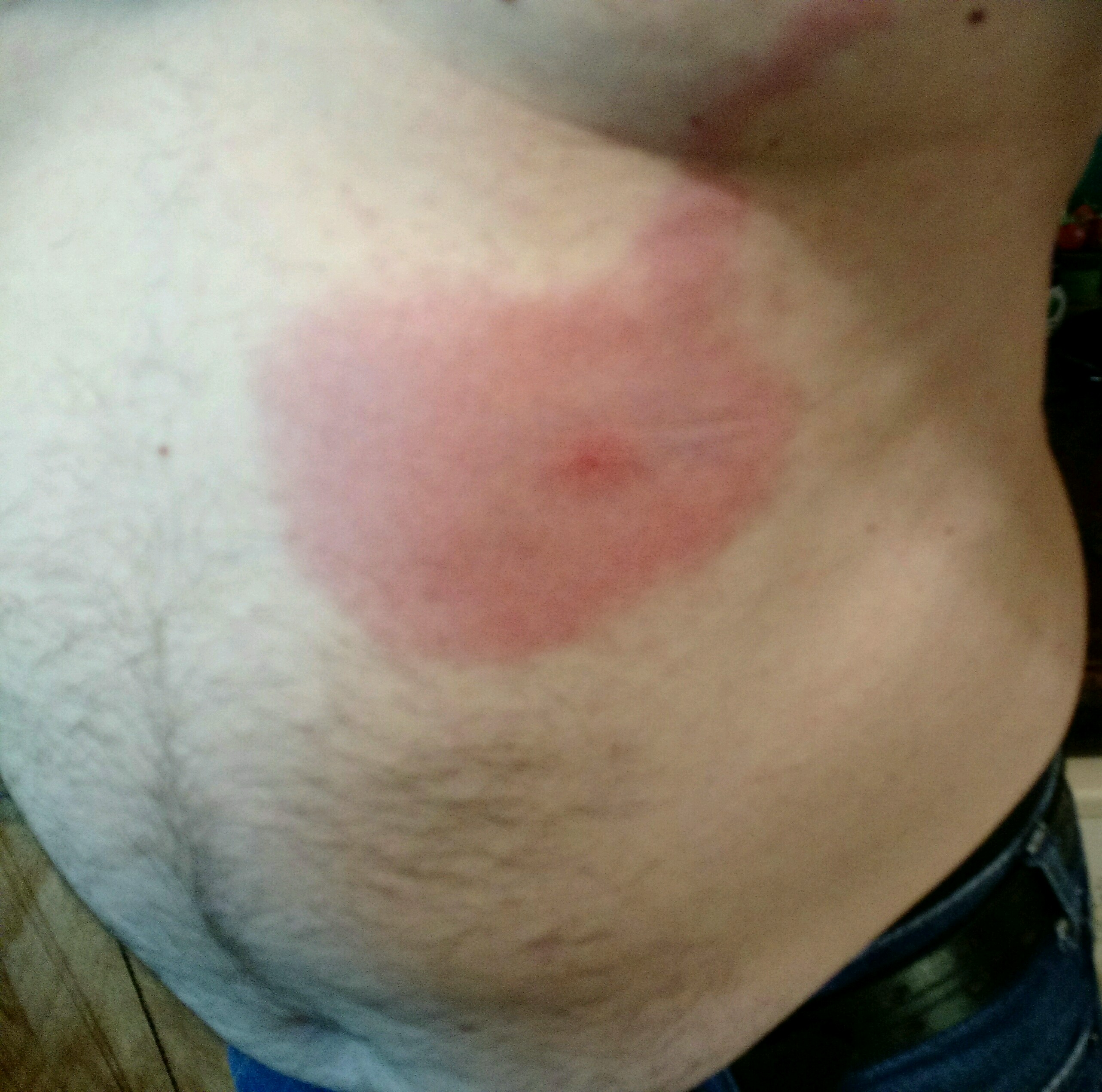 Luckily I have a great doctor, we've became friends. He replied back within a 1/2 hour and told me get to the hospital emergency room. He said he believed that it was a brown recluse spider bite. So I grabbed my wife and I drove myself to the emergency room. Dispute the fact i was feel loopy for lack of a better term and it was very painful. I'm a stubborn guy and drove myself there and home.

The ER doctor visually confirmed yes she also believed it to be a brown recluse spider bite. But only blood tests could confirm. They gave me two shots of something and drew 4 viles of blood. She also called in a prescription of sulfamethoxazole. Which is the most powerful antibiotic I ever took. I had to stay out of the sun or I felt sick to my stomach and felt like I was going to pass out. The antibiotics also plugged me up something terrible. Tests came back positive that indeed it was a brown recluse spider that bit me.

So it's been 2 weeks and 5 days since I was bitten and 3 days since completing antibiotics. I finally was able to go this afternoon, all I can say is it felt weird to eat something and have it hit an empty stomach. This is what the bite looks like now. I believe it's going to leave a hole. The scab is thick and deep, but thankfully the swelling is gone and so is the pain. 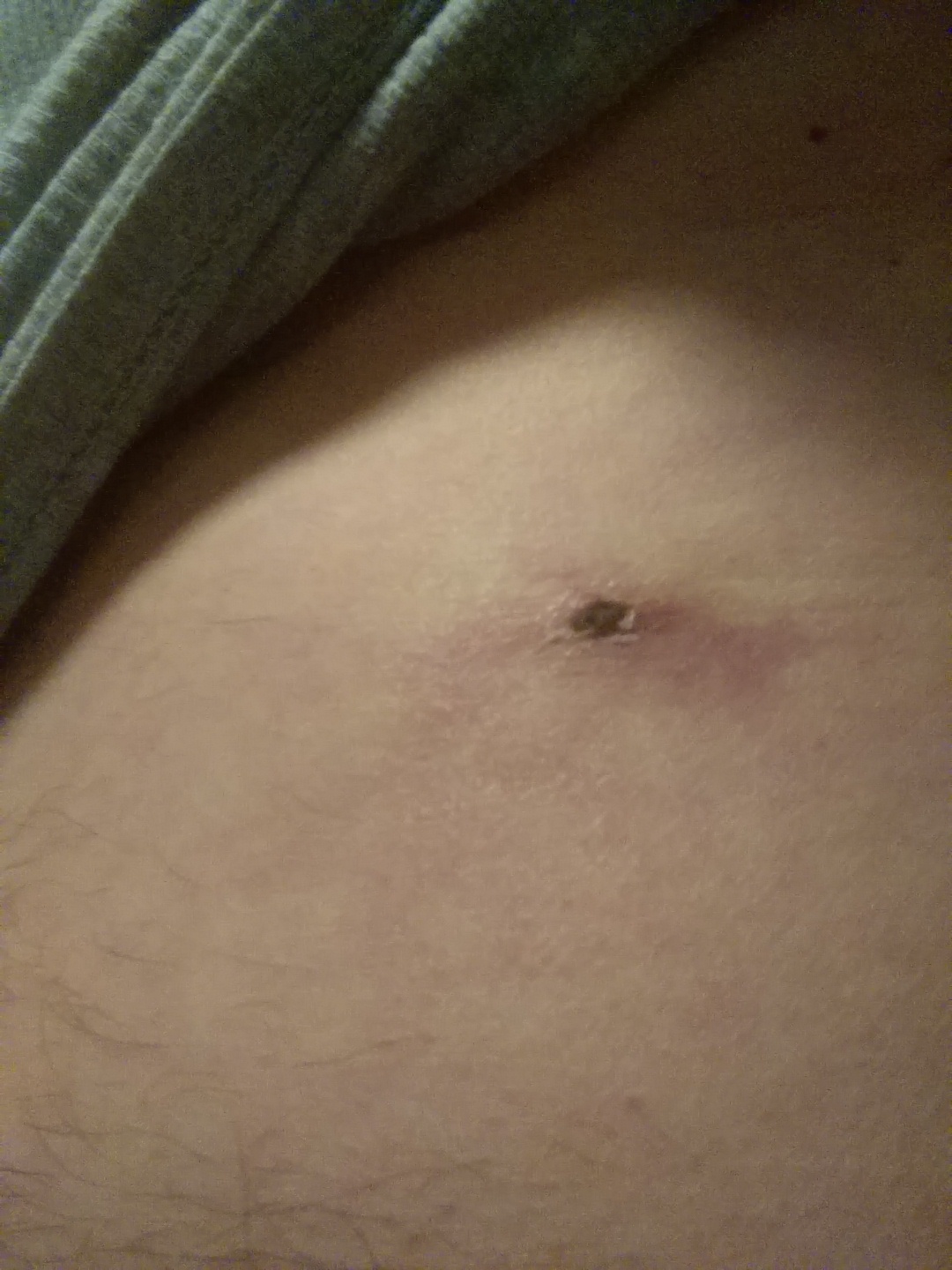 All I can say is beware, that little brown spider can put a hurting on you. If you get bit, don't play around get medical attention quick. The ER doctor told me the sooner the better to stop the infection spread. The internet is chalk full of pictures of people who obviously didn't take the
brown recluse spider bite seriously and the bite became infected, pretty nasty and I'm sure very painful pictures.

Here's a link to more personal accounts of people who have been bitten by brown recluse spiders. I don't know if I have "yellow puss" under the scab or not and will require surgery to cut out the dead tissue. We'll cross that bridge when I get to it (hopefully not).

lots of people are terrified of black widows, but they are small potatoes compared to the brown recluse.

Britesea said:
lots of people are terrified of black widows, but they are small potatoes compared to the brown recluse.
Click to expand...

I really don't want to find out which is worse.

Most people bitten by a black widow get sorta sick, there's a lot of pain at the bite site, but generally they recover fine. Brown Recluse bites eat at the flesh; I remember one woman got bit and she went into a coma, and lost her arm while in the coma. She did eventually recover, but it took weeks in the hospital. Definitely the violin spider is worse, in my book, but obviously, there are always exceptions.
M

The Brown Recluse is such a small type and with a huge impact. I've read where many people have had a lot of flesh loss around the bite site. Lucky you got treatment fast. Odd place. More often arms & legs. You must have been working shirtless. LOL

Mini Horses said:
The Brown Recluse is such a small type and with a huge impact. I've read where many people have had a lot of flesh loss around the bite site. Lucky you got treatment fast. Odd place. More often arms & legs. You must have been working shirtless. LOL
Click to expand...

I always weed whack in my birthday suit.
M

When my son was a teenager he got bit by BR 5 times...on the abdomen, on the leg, on the arm and once inside his nose. All very painful and only one had to have antibiotic intervention, so it could be they were from baby recluse. He was at a military camp and they failed to tell the parents they had a BR infestation there...and they let the boys come home for a visit too, bringing the spiders on home with them~he got a few of those bites when he was home on leave.

We fumigated his room, washed all his kit and no one else got bitten but those bites were hard to heal and very painful.

When I was working an emergency clinic a lady came in with a bite on her forehead...by the time it was finished necrosing she had a black hole in her forehead you could stick a pencil eraser completely down in to. I figure she had to have plastic surgery on that hole.