I have an abundance of dandelions in my yard (that I'm trying to get rid of without spraying) so I figured I would do some research and see what I can use them for. In my surch I came across dandelion salve and found out that it helps heal dry skin. So I figured i would try it.
First I picked a bunch of dandelions and put them on a cookie sheet lined with a paper towle to dry. 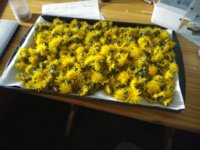 Like I said we have a lot of dandelions 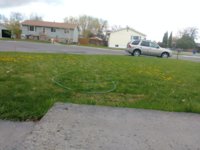 Can't wait to hear how it works for you.
M

So, what do you do now to make the salve? Looks like you have plenty of them !

My goats eat most of mine.

You need to make a dandelion oil:
To make dandelion oil, fill a canning jar about half-way with dried dandelion flowers. Cover with about twice as much as your favorite carrier oil, or to the top of the jar. (Suggested oils include sunflower, olive, sweet almond, apricot kernel, avocado, hemp and so forth.)

For a quick infusion: Set the uncovered jar down into a small saucepan filled with a few inches of water. Heat over a low burner for a few hours, keeping a close eye that the water doesn’t evaporate out. Remove from heat and strain. The quick infusion is the best way to infuse coconut oil.

For a slower, more traditional infusion: Cap the jar of dried dandelion flowers and oil and tuck away in a cabinet for around 4 to 6 weeks, shaking occasionally as you remember to. When the infusing time has passed, strain.

For an alternative option: You could also set the jar of dandelion flowers and oil in a sunny windowsill for several days to a week to jump start the infusion. (Don’t store for long periods in sunlight though, as it tends to fade flowers and herbs over time.)
How to Make Dandelion Salve
This recipe makes about four ounces of salve. One batch filled two of the 2 ounce glass jars with a tiny bit leftover.

We're past the dandelion stage for the year but thanks for the detailed instructions @rodeogirl! I'd like to try this next spring.

Dryed and ready to start making the infused oil. 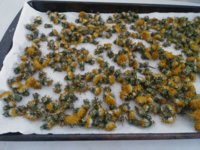 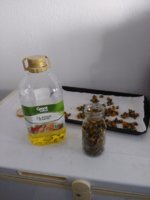 Ready to sit for a few weeks. 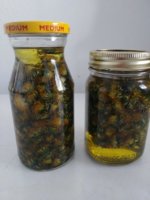 Thanks. Same way I do comfrey oil, salve.

I have comfrey and calendula sitting in a jar of oil right now waiting to make Mom some lotion. I may use some for the salve that she's also ordered from me.

Salves are much easier and longer lasting than lotions. Adding water means it needs preservatives.

I really like the dandelion salve idea. Thanks for posting the recipe. We moved 4 years ago and I spread seeds, but don't have enough to do anything with yet. In the pastures, the sheep eat them. Guess I'll have to transplant some to the garden to protect them LOL

I am kinda partial to dandelions...….

Just for fun, a recipe for blueberry cordial.