Thanks ya'll! I knew I came to the right place for some sympathy. Woke up feeling ok. Came downstairs and tried to do a couple things and got shaky and lightheaded. Made an appt. at the urgent care for this afternoon, but after thinking about it....I just felt hungry lol. Well, duh! Not eating for 3.5 days might be the reason. I baked a tiny potato and managed to get it all down. Usually I eat it all - peel and all - but declined the peel today. Feel better after getting a little nourishment. Probably will cancel the appointment, but gonna wait another hour or so to decide. Pays to keep your options open!

Went out to feed and felt pretty good. It's a beautiful day, mild temps (low 60's now but headed for 70), blue skies, low humidity. Couldn't ask for anything better!

And, just so ya'll can see how nice it really is here today: 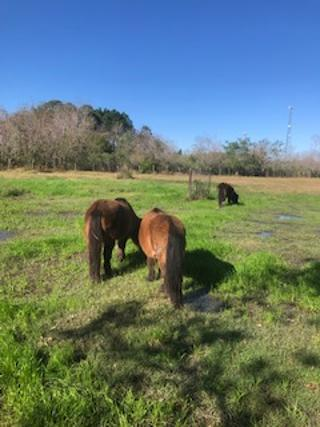 Thanks, feeling much better now. Have turkey broth in the pressure canner. Canceled the appointment.

It was pretty crazy! I had a reaction to really fresh beets several years back - the oxalic acid took me down. This felt almost just like that. I ended up in the ER from that experience. Should probably have gone this time....pouring sweat, trembling and shaking and weak, weak, weak. Literally crawled up the stairs. I've had some GERD issues lately - but this was out of bounds. Apparently I should stay away from acidic foods, lol.

But - I'm BACK!! Feeling pretty good tonight. Only lingering issue is that I get tired a little more quickly. However, I unloaded some feed today, canned turkey broth, weeded some in the garden and did a few more outside chores so it's all good. Glad that mess is in the rear-view mirror.

Another good day. Yay! I had to put out a new round bale for the critters today. Stoopid goats decided to jump ship and ran out to the pasture when I went through the gate with the tractor and the bale. Ungrateful beasts! That's okay though - they came back in for their dinner later. Never any doubt that would happen.

Unloaded more feed today and still have some left in the truck. I've got to set up a new storage area tomorrow. Anybody else curious about a possible rail strike? Well, I'm not gonna worry about it because I'm well stocked now.

Got on the treadmill for a half hour today. Trying to build back up some speed and stamina.

Baked off the last two of the Argonaut squash. I'll spread them on some trays and dehydrate then grind into a powder. It can go in soups for flavor and as a thickening agent. I'll definitely grow them again next year even if they are a hybrid.

Hope to move the buck away from the girls tomorrow. He's old and those girls have worn him out. He needs a break.

Took a good look at the doe that tested negative with the P-test. Weirdest thing - she's got a really cute little udder getting started. Something hormonal is happening in her. I'll try to test her again but despite what the P-test says I say she's bred. (and I'm usually right, lol)

reminds me of the time when i knew my SIL was pregnant before she did. we were talking about how she was trying to get pregnant and as we were talking she was raiding the refridgerator for pickles, cheese, etc. i told her she already was and she was.

flowerbug said:
i told her she already was and she was.
Click to expand...

frustratedearthmother said:
When ya know, ya know, lol!
Click to expand...

glad you are feeling better there!

Doing ok as a whole. It's like learning to eat all over again. But, the great side effect is a 10 lb weight loss! Can't eat more than 1/2 cup of anything at a time. Haven't had any meat except for one small bowl of turkey soup several days ago. Sugar is no longer included in my diet and caffeine is not loving me anymore. Tried a cup of about 1/2 warm milk - 1/2 coffee this morning. Crossing my fingers on that one, lol. Need to pick up some decaf the next time I'm out because I'm getting a bit tired of tea. But other than when I put something wrong in my mouth I feel great! Getting a lot done when I'm outside, generally getting 2- 3 miles a day in steps.

Gave Ginger her CDT booster yesterday because she's within that 4 - 6 week window ahead of kidding. Got Cameo's feet trimmed also. Today I need to do the goat shuffle again. The new Myotonic girls haven't made the transition to living with the other girls yet. Not for lack of trying....it's just not working out well. Goats are so clickish! It's not fun to see the little gals get bopped by another goat and "faint." Leaves them pretty helpless laid out on the ground and needing some time to unlock and get back up. Who thought myotonia was a trait to continue to breed for? ARGH I know, I know, I wanted them, but I was unprepared for how much it stresses ME out to see them "faint." I wanted them for the extra muscle they carry.

Eggplant plants are showing cold stress so I picked the rest of the eggplants. I need to do something with a whole bucket of them, lol. I have a recipe for an eggplant casserole that I used to love way back when. Haven't had it forever, but the ingredients aren't exotic so my belly should be ok with it. I might try that for dinner. Thinking about pre-cooking the rest of it and freezing it. I dunno... Anybody have any ideas for preserving eggplant?
You must log in or register to reply here.
Share:
Facebook Twitter Reddit Pinterest Tumblr WhatsApp Email Share Link