I just LOVE growing potatoes. I think they are my favorite vegetable to grow. And a freshly scrabbled potato does not at all resemble the pathetic specimens found at the grocery store.

I've been wandering down the google bunny trails about all things pertaining to potatoes, and have found some interesting trivia:

While potatoes from the grocery store may sprout, chances of them actually producing a decent crop of spuds are poor at best. Reason being: Market potatoes have been treated with an herbicide to keep them from sprouting. So, even if they do sprout, there's enough latent poison to keep them from producing tubers.

Organic potatoes bought at the grocer are NOT SUPPOSED to have been treated with this herbicide. So, you are likely to get a crop, but there is no guarantee that the grocer potatoes is not carrying a disease.

So, lets hear it for potatoes: What are your favorite varieties? Do you plant grocer spuds, Certified, or your own? Do you plant in the traditional hilled rows, under mulch (and what do you use for mulch), or in containers? Do you chit them first? When do you plant your potatoes in relation to your last expected frost?

By far, my favorite variety is All Red, or Adirondack Red (red skin, dark pink flesh). I also enjoy Yukon Gold, and Kennebec.

This year, ever experimenting in my garden, I'm pushing the season as well as trying new varieties. I'm chitting some of my own AR spuds, and plan to put them in the greenhouse next week. Our last frost date is typically May 10.

Today, I bought Kennebec, Superior, Yukon Gold, and Norland. Just for funsies, I swung by the health food store, and bought some organic Magic Molly (fingerling): 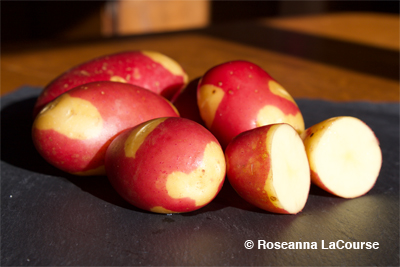 I typically dig a shallow trench, lay in my seed potatoes, cover with soil, then mulch in ever heavier layers as the plants get taller. I hand pick CPB and larvae, and eventually resort to Permethrin or Sevin.

NICE!!
We aren't having much of a garden this year. We have really alkaline soil, so it's hard to get decent spuds planted in the ground. The best spuds I grew out here were in straw. I usually grew Kennebec and a red potato that I can't remember the name of at the moment. Brain fart.
I tried planting grocery spuds one time. Very, very poor result. Lesson learned. Ha!

Soapy water took care of any potato bugs that I ever had. That and Neem (if I have to bring out the big guns) are the only two bug sprays that I use on our property.
L

If you're new to growing potatoes, here's an article that gives some good generic information.

If you are gardening in tight quarters, corn and potatoes make good bed fellows. They are both heavy feeders, both benefit from hilling or HEAVY mulching, and by the time the corn is tall enough to shade out the potatoes, the potatoes don't seem to suffer from the shade.

That's interesting, about the herbicide. I've seen potatoes dirty and caked with soil in the stores here, so I doubt they've been treated with anything. Most of the store bought taters I got here grew very well if I left them long enough. Favourite to grow is the Red Rooster, for the amazing flavour.

When I lived in Wyoming there is no way to garden in the ground where I lived - it was rotten granite, pebbles, sand, rocks, clay and very alkaline. So , I made some potato bags from landscape fabric to grow my potatoes in. it worked great!
They were 18' in diameter and 18" tall. I rolled the top down to abut 12" and filled that up and put my starts in there. As the plants grew, I unrolled the bag a little and added more growing mix. Repeat as the plants grow until the bag was full. I did have to add a piece of fencing wrapped around the bag to hold the plants upright so the wind didn't rip them apart, and I wrapped the bag in clear plastic to help hold in the moisture.
When it was harvest time, I just slid the bag into the tractor bucket and dumped it over. I lifted the tractor bucket to a comfortable height and sifted through with my fingers. the dirt went into a garbage can till next year and the potatoes were very easy to pick out.
I made a growing mix of manure compost, mushroom compost, topsoil, and peat moss - everything I bought by the bag from the store.

What a great idea!

One other interesting thing to note about some store potatoes....sometimes the commercial farmers will plant a root crop such as potatoes so as to clear out the heavy metals in the soils from using commercial fertilizers for an extended period. The root crops uptake such things from the soil making it able to grow their other, usual crops better.

So, essentially, they are using potatoes, carrots, etc to clean their soils and we are eating the heavy metals contained therein as a result. Pleasant, huh? No guilt on their part at all at offering such crops to the public for consumption, as it's all just money to them.

I don't seem to be able to feed my potatoes at all, as when I do, they turn out all tops and no crop. Even just a light layer of my chicken compost seems to produce these 5 ft. long vines that are beautifully green and blossom beautifully....but have very few spuds under them.

Be wary of accepting seed spuds from other people, thinking they would be fine to plant. I did so from my brother one year and have had slugs in my garden ever since...I had forgotten him mentioning his HUGE slug problem he got when he put a truck load of mushroom mulch on his garden one year.

I usually get my seed spuds now from an organic source and they produce very well. I've settled on Red Pontiacs as my tater of choice these past few years, though those Pinto taters are so lovely I wouldn't mind trying them. I've tried Yukon Gold with poor results and Kennebec usually does well here but seems to get scab for me now.

In this area, the two types that do consistently well for most growers are Kennebec and Red Pontiac, so when you search for seed potatoes, those are sometimes the only ones you'll find, especially in bulk.

I grew up till gardening and we'd till thoroughly, make a trench, dribble in 5-10-10 fertilizer, drop in the spud piece and cover over. We'd hill them well and keep them hilled until they were too big to properly hill then let them be.

Nowadays I use mulch entirely, no tilling at all. I just layer in mulches, let them compost down all winter, sink the spuds into the mass until I hit bottom, then leave them be. We don't get potato bugs here but Jap Beetles sometimes get on them...they are too large by then for it to matter. Good yields from that method if I don't use too much chicken compost or manures. I no longer use commercial fertilizers like we used to ....sometimes epsom salts, lime or sulfur powder, soapy water for insects and such.

@Beekissed Very good point made about commercial gardening practices: Using root crops to soak up toxins from the soil. Yet one more reason why I am so driven to grow as much of my food as I can. Every time I buy potatoes and carrots at the grocer, I think on this. But, I have yet to reach the point where I can successfully and reliably grow enough of my own root crops.

Lazy Gardener said:
@Beekissed Very good point made about commercial gardening practices: Using root crops to soak up toxins from the soil. Yet one more reason why I am so driven to grow as much of my food as I can. Every time I buy potatoes and carrots at the grocer, I think on this. But, I have yet to reach the point where I can successfully and reliably grow enough of my own root crops.
Click to expand...

Me neither. I can grow enough spuds but I have yet to be successful in growing carrots. What I can grow that taste remarkably like carrots~I have recently found~is butternut squash! I can grow that quite easily...it keeps well if you have a cellar, but, alas, I do not, so I have to use it in soups and such as much as I can so I can jar up all that goodness, but I'd sure like to have some fresh carrots from a winter harvest crop throughout the winter.
You must log in or register to reply here.
Share:
Facebook Twitter Reddit Pinterest Tumblr WhatsApp Email Share Link