I rendered l rendered lard for the first time yesterday. This is a thread for us to discuss lard, rendering it, canning it and using it in cooking. @frustratedearthmother @Britesea @Mini Horses @NH Homesteader and anyone else please add your experience to the thread!

So yesterday I took out 2 packages of chopped lard from the freezer and put it in my largest pot. I am proud of this huge commercial stainless steel pot, it was priced at $130, but after talking to the men in the commercial kitchen store, telling them all about my canning and running my mouth (which I am VERY good at) they knocked $30 off the price. It is so big that I can't lift it when even half full.

Anyway, I defrosted the lard in the microwave for 8 minutes, then put in my big pot. I put it on medium low heat and it slowly melted. I did not add water. Over the course of the day, I stirred it and that's about all. When it was all melted and boiling, I strained it through a colander. Then restrained it through the colander lined with cheese cloth.

Hmmm...…. normally I fill jars with boiling water to heat them up, but didn't want water in my lard. So I filled quart jars with the not boiling any more, cooling down lard. I placed the jars (4 quarts) in The Beast, my 921 All American pressure canner and water bathed, not pressured, them for 10 minutes. I cut off the heat, let it cool awhile and took the jars out. They popped a seal.

So today I am rendering the remaining 4 packages of chopped fat/lard. I will keep y'all posted!

Chopped fat in my big pot. 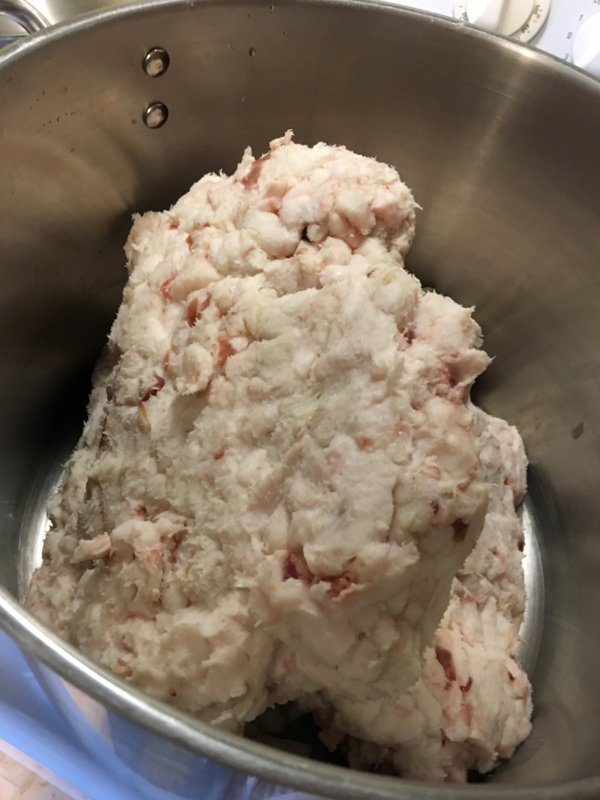 I think that's awesome - and so is the pan! I've rendered lard at least three times. Once several years ago - probably 5 at least. I still have part of a jar of that older lard in my milk fridge. I need to pull it out and give it a look. I did another batch maybe a year ago - and it's beautiful, pure white and odorless. Sometimes I grab a jar of it thinking it's milk lol. Even pulled a prank on the grandkids when they were here. I took some out of the fridge, took the top off and was walking towards the dining room table with it. Kiddos were waiting there for their glass of milk. So, I feigned tripping and spilling milk in their direction. They both ducked thinking they were about to be soaked with milk. They were not amused lol. But, they were surprised that it was so pure white.

Third time was just a short while ago when neighbor butchered for me. I gave him half the pig so I only had half a pig's worth of fat. Still got several pints. And, because we've been talking about it so much I'm planning on frying some eggs in it soon.

First straining in my biggest pot, not the commercial one, it’s still cooking. 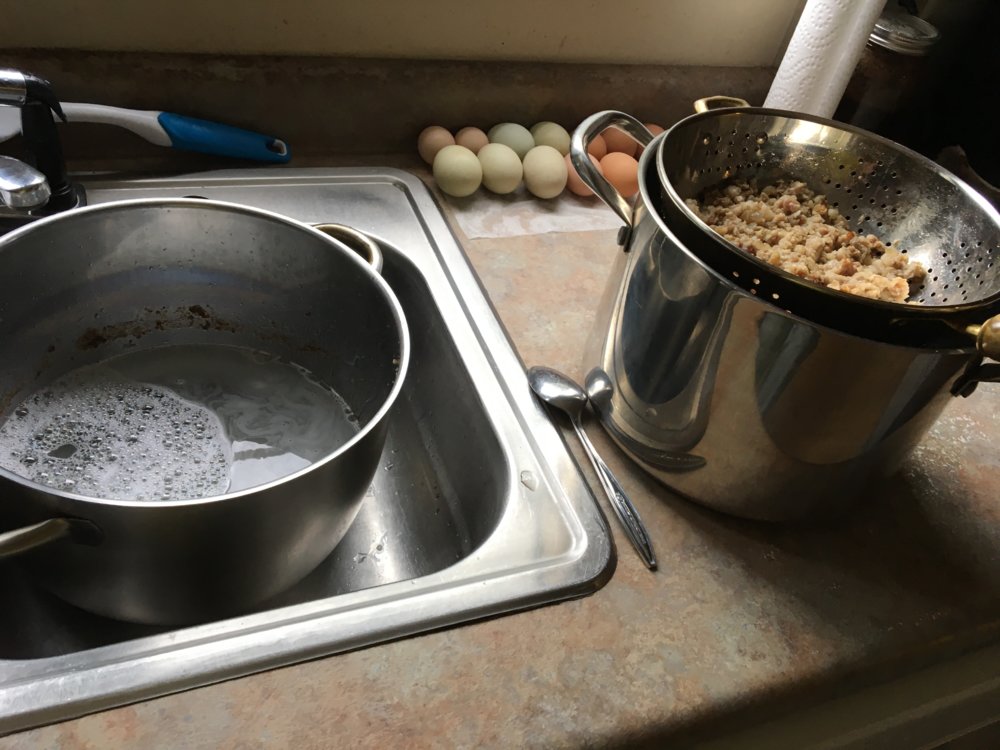 Biggest kitchen pot is in the sink, washing in Dawn dishwashing liquid. I reacct to it, so almost never use it. I hate the stuff, but it sure cuts the grease. My tongue and lips are starting to tingle.

Second straining through cheesecloth. Then I returned the melted lard to the pot and put back on the stove to keep warm.

I have a bunch of lard to render... I've been slacking, lol! I'll use it for soap primarily. I've never canned it, just put in mason jars in the fridge . It lasts a long time like that!

I have 6 quarts in The Beast, plus 2 that went straight in the refrigerator. One is an olive jar, one is a jar that held sliced jalapeños. Just turned off The Beast. 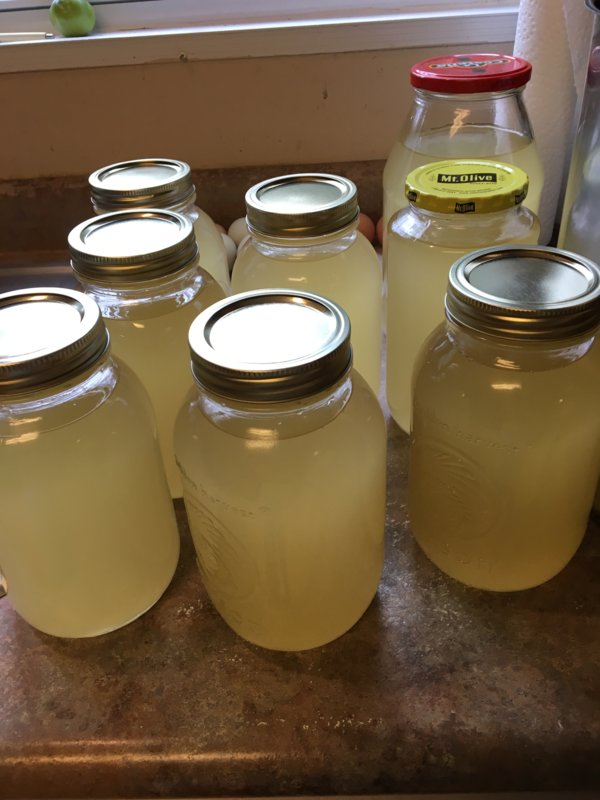 We tried the cracklins. I put some on a plate, covered with sharp cheddar, nuked in the microwave and salted them. They were so good! 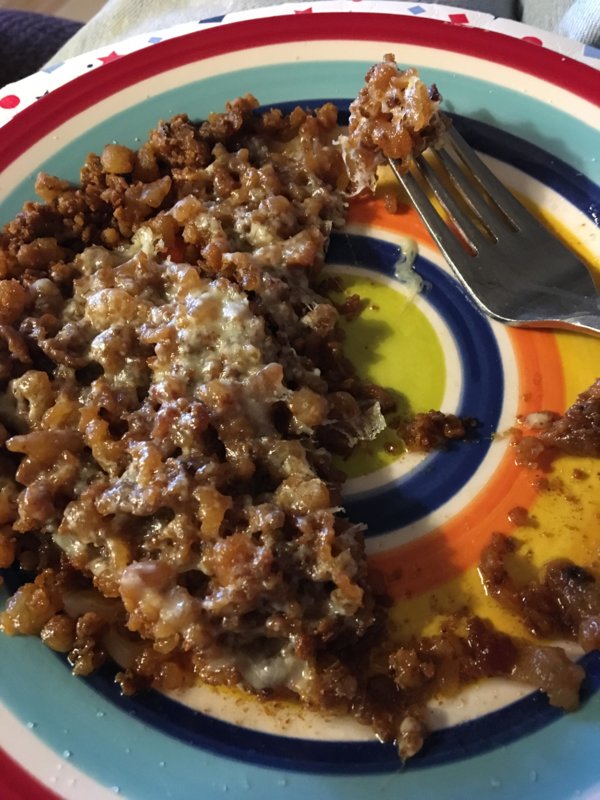 Oh man, I need some more cracklings! They are sooooo good!

baymule said:
I have 6 quarts in The Beast, plus 2 that went straight in the refrigerator. One is an olive jar, one is a jar that held sliced jalapeños. Just turned off The Beast.

We tried the cracklins. I put some on a plate, covered with sharp cheddar, nuked in the microwave and salted them. They were so good!

And it looks good too, making my mouth water.

So I have 10 quarts of lard, plus the two I put in the refrigerator. A friend brought his little boy over, selling stuff that schools do to the kids for fund raisers. Naturally we bought a couple of vastly overpriced items. Russel tried the cracklins and pronounced them good. He was very interested in the whole process and asked a lot of questions. Short version is he has two bags of river caught catfish fillets in the freezer. He’s going to bring them to me, I’ll fry them in the lard and invite him and his wife over for supper.

Cooking down the rest of the cracklins. Put two bags of about a half cup each in the freezer. Will probably get the same from this last batch.