So, your ground does not freeze very deep, then. We may get frost as deep as 6'! Sometimes get several weeks in a row where it never makes it up to 0*F. But, our winters have been milder the last few years.

You stay a bit warmer than we do. Mid September frosts aren't unusual here. Then it will warm back up. I just cover sensitive plants.

I'll take all the rain to keep the mild winters here. Growing up around Hermiston Oregon we had ice storms for winter more often than snow. Got to get the 9 inches of yearly precipitation in the most horrible way possible.

I am done with the Dirty Birdies. No more Cornish Cross to feed, water, move their tractor daily, or butcher. I am through!

We raised 73, sold 45 and stuffed the rest in the freezer, that we will split with our DD and family. I canned 21 quarts of chicken parts for the dogs. I had a bunch of breast bones (skinless boneless breast) that I was going to simmer for broth, but I already have 34 pints. So I sent DH to the Pig Palace and he tossed them over the fence. There were a lot of them. Pigs loves them some chicken!

Coffee is ready, going for my second cup. Got plum juice in the refrigerator to make into jam today. That will give me more room in the refrigerator. Then I can cram other stuff in it. Dunno what, but I'm sure I'll come up with something. LOL

I did 3 batches of jam, was done before 12. Then I took a nap. We went to Mineola and traded chicken for fish, then went to Lindale to the Post Office, pharmacy, got a big order of the best onion rings in the world and came home to eat them. Took another nap, DH is still napping. Scorching hot outside, we’ll wait until 6 to go feed.

I’m run down and tired. Been pushing hard, getting things done. We have plans on doing more work outside tomorrow morning, finish cleaning up, machete chopping big weeds, putting stuff on the burn pile.

Coffee is ready! Scrambled eggs with chopped onions for breakfast. Will get outside after daylight to get chores done, then we’ll probably work until around noon.

Coffee breaktime at just after 2pm here. Drought is worse. We had gotten 1" of rain 1&1/2 weeks ago, but it did little. The pond down the hill is almost dried up.

Lots to do. Watering, totally re-did one pond, and husband re-did another that's basically a waterfall. Mostly just moving rocks around now.

Have been working on an area by the house. Chickens were moved to a different area, and have been making it what would be considered a "normal" yard. I heard people have yards like that, and that they're quite nice. It was such a mess from the chickens. The patio had been covered by landscaping rocks with only paths, from chickens scratching. Moved rocks back, working on borders, planted hostas and coral bells, cleaned up the patio, just making it a peaceful area.

Planted some squash and melon plants in pots, so that it's easier to water and keeps water around the roots, not the surrounding dry ground. I'm trying a pot made of fabric for the melons. The roots don't circle around the pot, and the roots connect to the soil the pot is sitting on.

Sitting outside in the new peaceful area.

I found the non-woven fabric pots dry out much faster than plastic pots of the same size. I have both. Some plants do better in the fabric pots.

Hinotori said:
I found the non-woven fabric pots dry out much faster than plastic pots of the same size. I have both. Some plants do better in the fabric pots.

Thanks for the tips. It will be interesting to see which ones I like better. I have lots of chicken litter.

Interesting hearing you all talk about elderberries.

We have a bunch here... and they always throw out a huge crop, they love our weather.

There are several different kinds of elderberry.

The one we have you have to cook, or it gives a belly ache. There is some acid or some such in it that is destroyed by cooking.

We used to have even more elderberries around the house than we do now... but the goats loved them. Yum, yum. Yum.

Right now they are at full bloom.

I thought the goats had eaten this one down to nothing,but it has come back great.

I took a shot from far away... I thought it looked so pretty with the dandelions and the view... but it is there on the left. 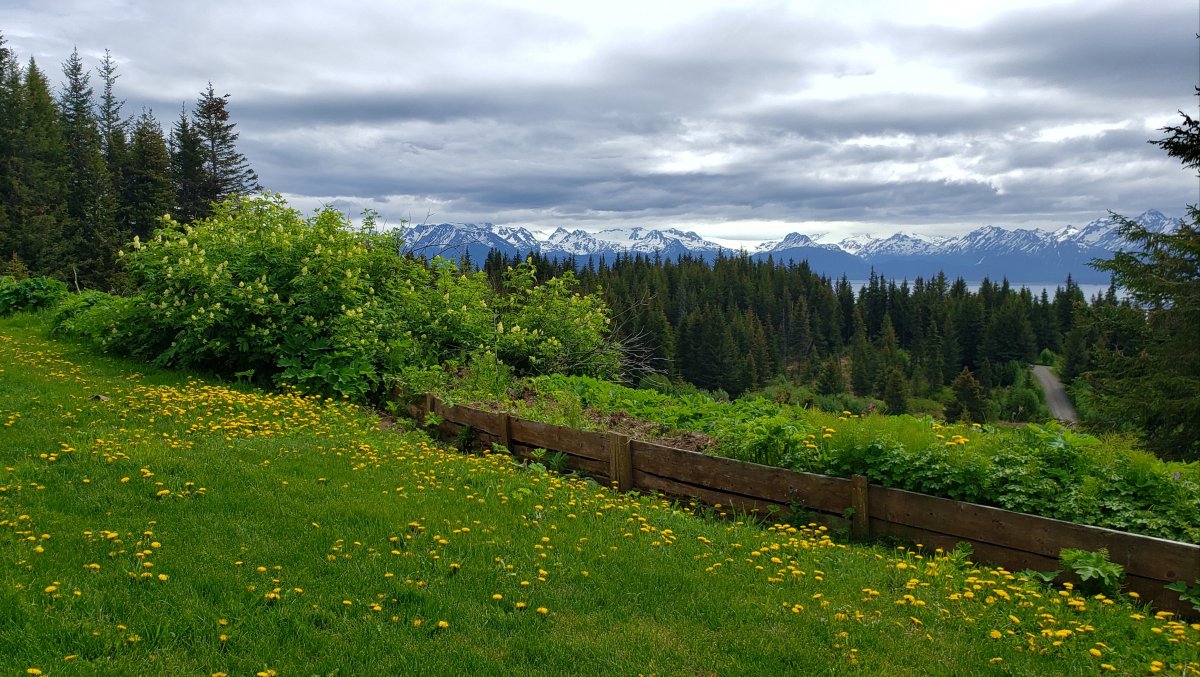