frustratedearthmother said:
Sorry you're having a cruddy day - but really glad Boi is stepping up!
Click to expand...

same from me, but also give Boi a hug if you can because it will help you feel better too.

I made a bathtub drain plug with a floating ball for Boi to pull. Losing consciousness in a bath and drowning is a risk with POTS. I've had a close call and others I know with the diagnosis have too.

My hope for a finished behavior is Boi will pull the plug if I slump or am non-responsive. He pulled it for the first time yesterday, with lots of encouragement. I'm hopeful for this behavior to work out the way I imagine. 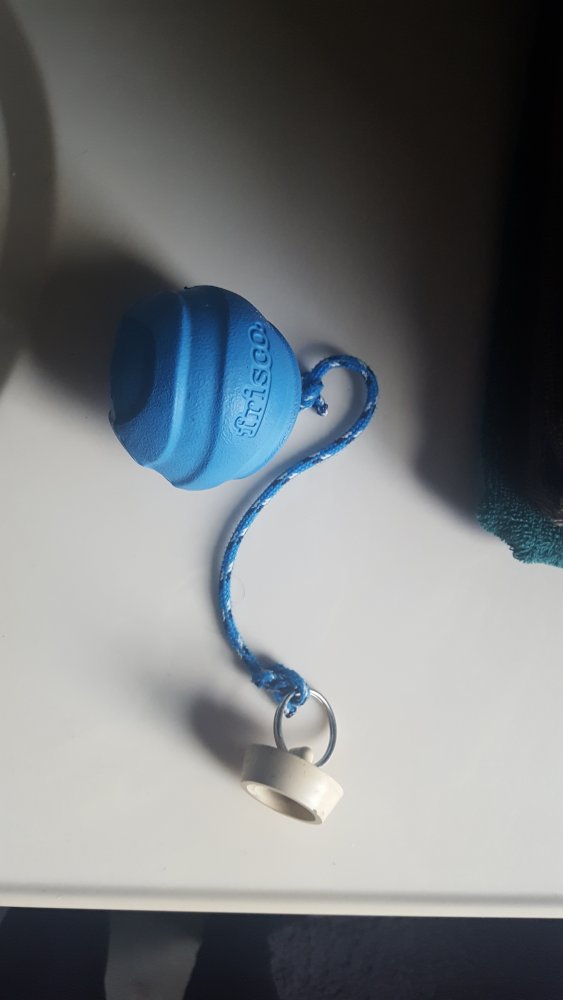 I have been walking Boi a lot the last couple days. He is beginning to show less interest in passing cars. He is doing well with maintaining good position for counterbalance, and he is starting to do some momentum pulling up hills. He is beginning to walk straight enough for light guiding work.

frustratedearthmother said:
Sorry you're having a cruddy day - but really glad Boi is stepping up!
Click to expand...

I skipped a couple days of training due to feeling poorly from an ear infection. Boi found his teenage furry finger. Oh my!

Rather than refuse to obey cues, he is the insistant, whiny, attention seeking, ringing the doorbell incessantly and scratching at doors. Baymax saw the opportunity to egg him on and started play biting his face whenever she could. Of course he reacts rambunctiously and gets corrected. I understand the expression "calculating b#@!$" now.

After the 30th time he rang the doorbell this morning, we had a "discussion" and "came to an agreement". He decided lying on his bed wasnt such a bad choice after. Silly puppy!

Boi had his first bath here. He did great! I've been preparing him for it since his first day here, with having him get in the bathtub and letting him use the tub faucet as a drinkinf fountain. Baymax was too filthy to ignore, so I bathed her first while Boi watched. He hopped in the tub after so I turned the shower on and said a little prayer. He was great! Didnt try to hop out, didnt shake water everywhere. So thankful!

I've taught him to lay on a blanket and keep his paws and nose on the blanket. I folded the blanket smaller to teach him to lay in a small space. Its important for keeping him and others safe in a setting like a waiting room or restaurant. However, he doesnt naturally prefer to curl up, or "tuck" when he lies down so I needed another strategy. I got out a small kennel, less than half the size of his normal kennel. I put Baymax in the kennel and gave her every smelly most delicious treat and chew I could find. When she was done chewing I let her out, pushed the toys, treats, and chews into the center of the kennel and closed it. I let him get jealous and frustrated and then opened the kennel. He went in.

He struggled with coordinating his movements to turn around in the small space, but the treats and chews made it worth it. He is getting better at it. The end goal is that he will be able to contain himself on a 24×36 inch mat for up to 2 hours. This will be challenging for him. When Danes are raised from little pups to be service dogs, this is a skill that is developed from 8 weeks old, using small boxes and laundry baskets to shape the pup's prefered resting position into a neat tuck.

I've been working on carrying items in a bucket task. I've added a rock to weight the bucket. He is picking up the bucket and setting it down. Last week he was touching the handle with his front teeth. Its progress, but so far away from the finished task. I need to add finding, carrying, retrieve, and send away components to this task. Its a complicated one.

I feel so far "behind" right now. Getting into the long slog part of training.

tortoise said:
I feel so far "behind" right now.
Click to expand...

a lot of patience and persistence for sure! i'm really enjoying reading about this, thanks for writing it up as you go.

He has been refusing to do things. He is so funny about it. He hears the cue, looks at the thing hes supposed to pick up, and then starts looking around the room. "I hear you, I understand, and I refuse."

Nice try puppy, I'm a teenage human mom too, I've got this! I stopped feeding him in a food bowl so the only food he gets comes during training. Between training sessions, I'm kenneling him. This increases engagement. And if he refuses a cue, the training session is over, back to the kennel.

He is coming 'round to see things my way.

I switched from bucket retrieve/carry to basket. (Basket is easier). I'm putting the basket about 6 feet away and gaving him bring it to me. He likes to pick up the handle and throw the basket!

so I filled it up with medication bottles. He still throws it, but not hard enough to spill most the time. The times he spilled it he retrieved the spilled bottles and brought those to me.

He is starting to bark at unfamiliar noises, knocking at the door, etc. I'm not pleased. Baymax starts it!!!! She barks once and stops- which is my preferred reaction. Boi carries on and on! Will drive me crazy. But this is a delicate thing to train. Too much correction and a puppy becomes nervous and will bark more. Not enough correction and the behavior escalates because its self-rewarding.

Silly Boi! But you got this!

Dogs seem to always have to have that last bark. It goes around the neighborhood, even a mile or two away. Just when I'm getting back to sleep, It's Carson's turn...BARK! BARK!