What did you do to MAKE money today?

For me, I know that psychic receivers exist. Having had my animals actually "speak" to me & having other receptions of things that do occur. Unfortunately my receivers seem to be very centered around a coming event.

My favorite "heart" horse had been sold and I visited him when I took a mare 800 miles away to breed. When I saw him -- looking great! -- I hugged him and told him how much I missed him. He replied that he was glad I came as it would be the last time I saw him as he was having stomach issues and thanked me for the many wonderful years we had together! It was as if he actually "said" the words as they entered my mind. I was so concerned with these thoughts that I began questioning the owners as to his care, feed, issues, etc. I suggested they have him vet checked -- they thought I was nuts as he looked good, acted good -- and I said something was not right with him. A month later they called to say he had passed while at the vet for emergency surgery. Gut tumor. This cannot be something I just thought up!!! He TOLD me. I cried for days. This is not the only example of such talks.

For me, I cannot seem to expand beyond those who "choose" to speak to me but, know those who can. Perhaps I need more meditation time....life does not allow that right now.

I have known psychics who DO have ability to "know" things. My life has been enhanced by one such lady who so very many years ago gave me a "reading" and because of that I know I will live to 105 ! Things she advised me have taken place, things I could NOT have made happen or even wanted to happen but, they did. I am a believer.

I'm am a fairly skeptical person. But do admit there are many things in this universe that science has yet to explain.

I've never had any of those moments where I actually heard anyone's thoughts. But can generally look at people or animals and know what they are about to do. Though I believe it has more to do with being able to read their body language. Long before spoken word came about body language was the only way to really communicate and even intraspecies the general positioning and stances are similar across the board.

Even with my twin we never had any experiences of thought sharing or anything like that. And I've never been emotionally closer to anyone or anything in my life.

Spirits? Sure. Seeing outcomes before they come? Yes. But not telepathy. Mehwell.

My experience never made me believe that I'm the telepathic one. I believe that this man had that ability...perhaps the horror that he lived through gave him something special. This man had been in a horrific fire...he had no ears, no lips, his eyelids were not original equipment and he had stubs for fingers. I'm sure he had not just months of recovery, but years. Talk about having time to meditate - I bet he is a Master Meditator - if such a thing exists.

@MoonShadows As many people here (with no training) have pointed out, it is quite possible and happens frequently without any intention at all.
I believe anyone (yes, seriously, anyone) can communicate this way with any being if they wish, it simply takes practice to do so. It takes learning your inner voice, and getting quiet to allow the other voices to come through. It also takes trusting your gut, as sometimes the messages come through as feelings, pictures, sounds, sensations, or images, as well as words. I tend to get lots of images, and then feelings of knowing, and sometimes words. I have a friend that gets lines of words that the animals tell her.
There are plenty of fakes and phonies out there, but I have a feeling those people do have some of a gift, they simply haven't honed it well enough and instead of working through their *own* issues (i.e. ego!), they just try to fake it, which leads to disappointment and mistrust. You really can't have an ego in this work, it doesn't work because you won't get the answers (and the animals have a way of swiftly putting you in your place anyway).
Its tremendously fun and highly rewarding.
I can't make a believer out of you, but I'm happy that you're willing to ask questions. That being said, your mindset creates much of your reality. So whatever is communicated you will end up framing around your own beliefs, and will be unable to see the connections even though they are there if you don't really believe it works. If you have an animal, and are willing to be opened minded and want to know more, feel free to pm me. I'm doing special super reduced rate sessions (only $20) right now while I'm still learning.

Swinging back around on topic, I managed to make just under $100 at my workshop this weekend. I am so relieved and happy to have that money! I also got my check for farm sitting for the month and a half that my friends are gone. That's a FAT check, the most I think I've ever made farm sitting at one time! It means twice a day visits to their farm which is about 12 miles from me for the next month and a half... but I just have to keep reminding myself that its the money that I made that's keeping me afloat!!

I didn't make any money other than work last night. Yeah I'm back in third shift again.

I did however manage to spend money. I finally decided to upgrade to a bike I don't have to constantly work on. Oh I'll keep that old shovelhead. But it'll only come out on short rides.

My new baby an 04 Road King. (in gonna call it a Road Queen from now on cause she's too pretty to be a guy) 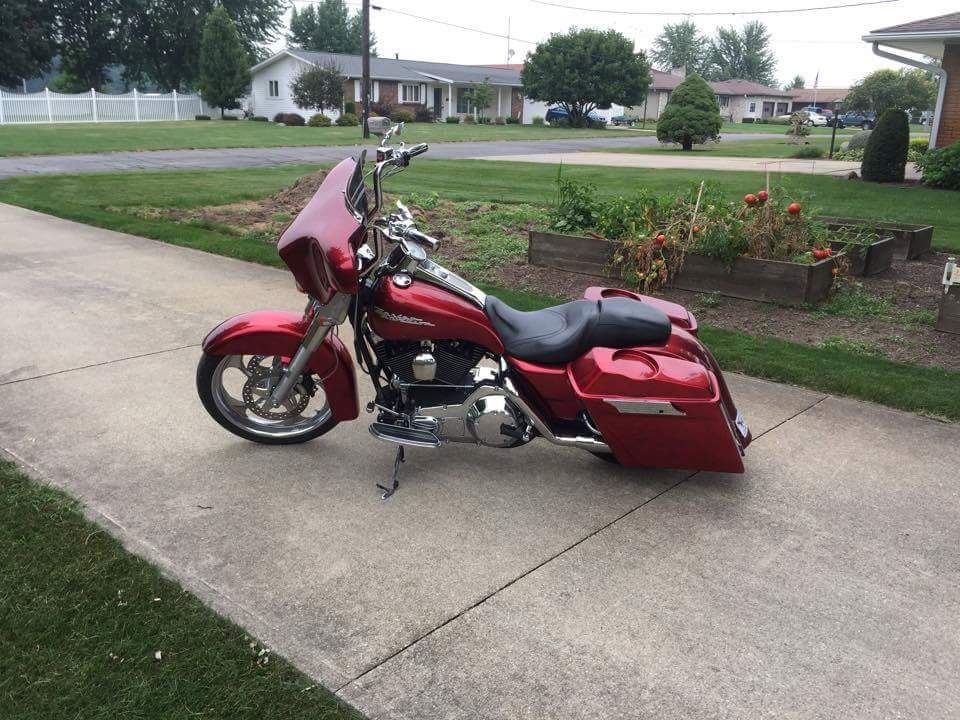 Time to ride it home.

I don't want to jinx myself, but I think I've got two goats moving to a new home on Wednesday. They've been 'spoken for' so we'll see if the folks come through. If all goes as planned - two less mouths to feed!

Goat math. If you subtract, you must add!