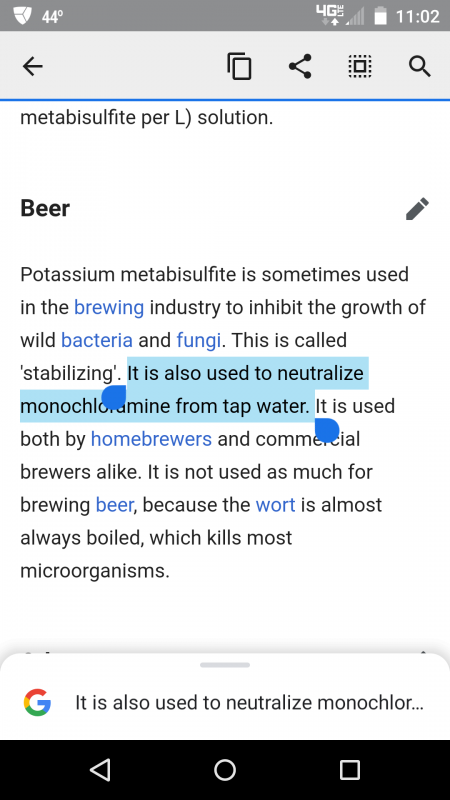 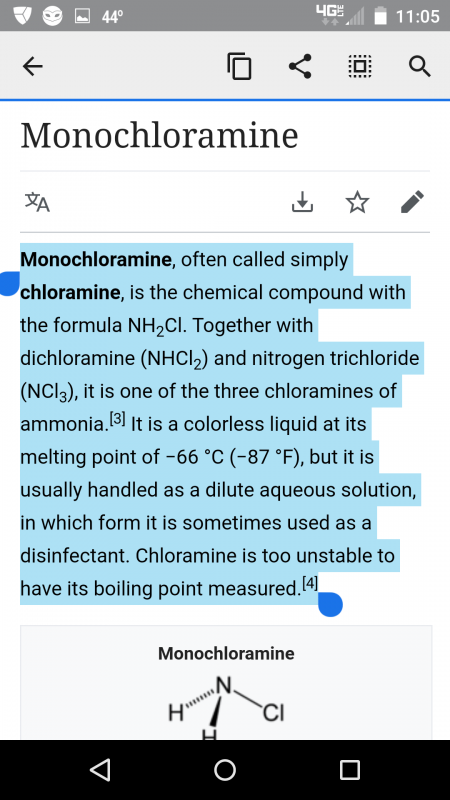 Well I would say I most definitely fixed my water problem. I've never had an explosive ferment before, until now. The yeast loosened the lid off of the air lock and sprayed krauesen all over the lid, the thermometer floor and wall. the laundry room smells of good beer now though. Yes honey, I made a mess... I'll clean it up. 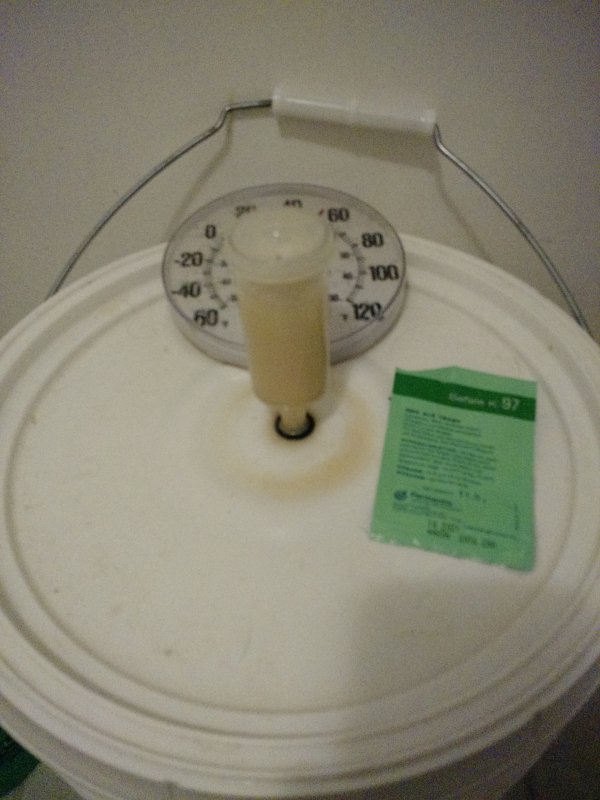 I added a blow off tube, into a small bucket of starsan sanitizer for the duration of the primary fermention. 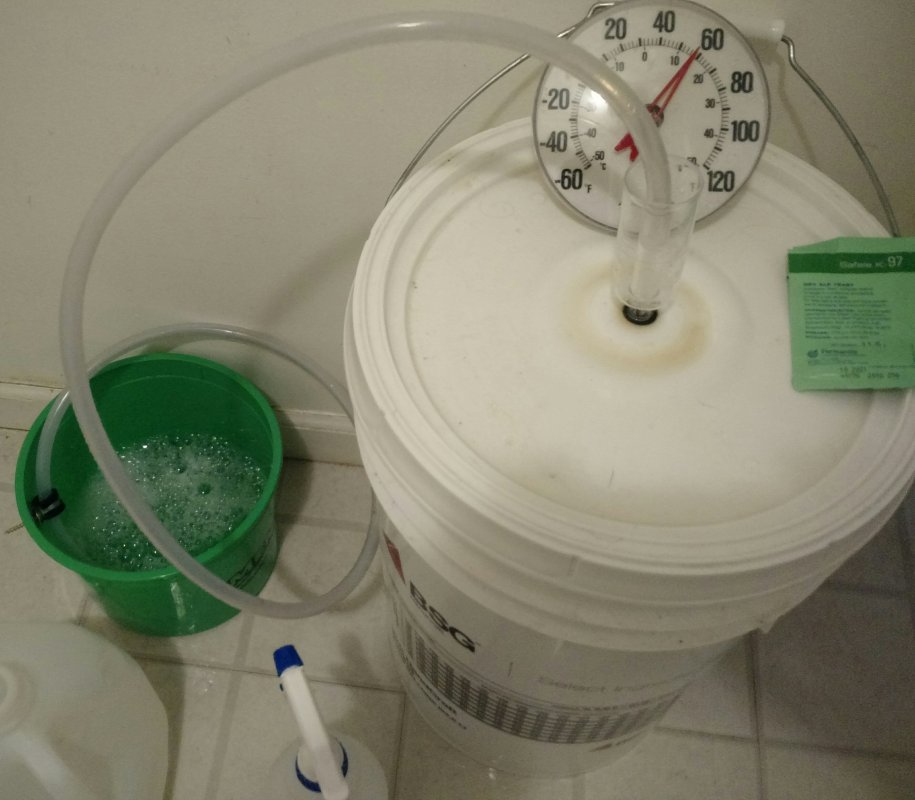 Primary fermention has completed. The gravity was 1.014 which puts this Altbrier at 5.0% on the nose. Safale K-97 (German Ale Yeast). Is most definitely a top fermention yeast. I was surprised to see a thick creamy yeast crop sitting on to of the beer when I opened the primary fermenter.

After racking off 5 gallons in-between the top yeast crop and the trub on the bottom, I ended up filling a 5 gallon corny keg. And I was able to harvest 3/4 of a gallon of yeast, trub and beer to start future batches.

The beer tasted smooth and had a great flavor and a good mouthfeel. I have the keg lagering, where it will remain for a few weeks before I bring it in to carbonate

So far so good... Hoping for a great beer when it finishes.

I'm preforming an experiment with what I gathered from the bottom of the Altbrier brew kettle and safale K-97 German Ale Yeast.

I filtered out all off the hop and sluge (trub) and refrigerated about 3 quarts in a clean and sterlize 1 gallon jug, while my 6 gallon Altbrier batch fermented.

After the 6 gallon batch finished fermention, I harvested the yeast and let both the yeast and 3/4 gallon come to the same temperature. Then I added a small amount of harvested yeast to the 1 gallon jug.

The brew started fermenting almost immediately. Normal ale yeast ferments no less than 65 degrees, but this K-97 likes it cooler down into the upper 50's. Unlike other ale yeasts I've tried, K-97 is a true top feeder and create a thick creamy krauesen. I'm really liking this yeast so far. Only downside is you have to give it plenty of headroom or it will create an explosive mess.

from what I've read K-97 is a very old strain of German yeast and what German beer was fermented with before the invent of lager yeasts. It's a strange ale yeast... Because you actually treat it like a lager yeast and lager the beer the same way you would as a lager yeast.

It's always fun to experiment... K-97 is most definitely a top crop fermenting yeast. But it's going strong on the higher end of lager yeast temperature @ 56 degrees F 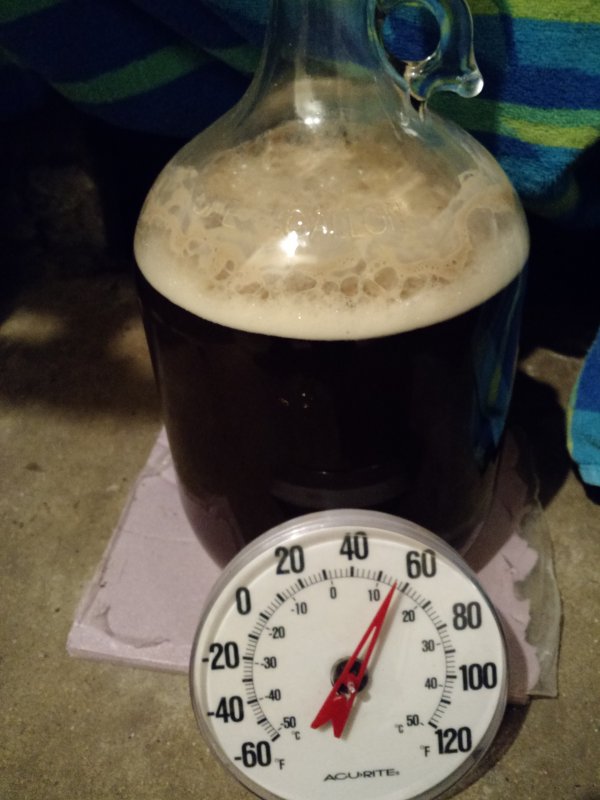 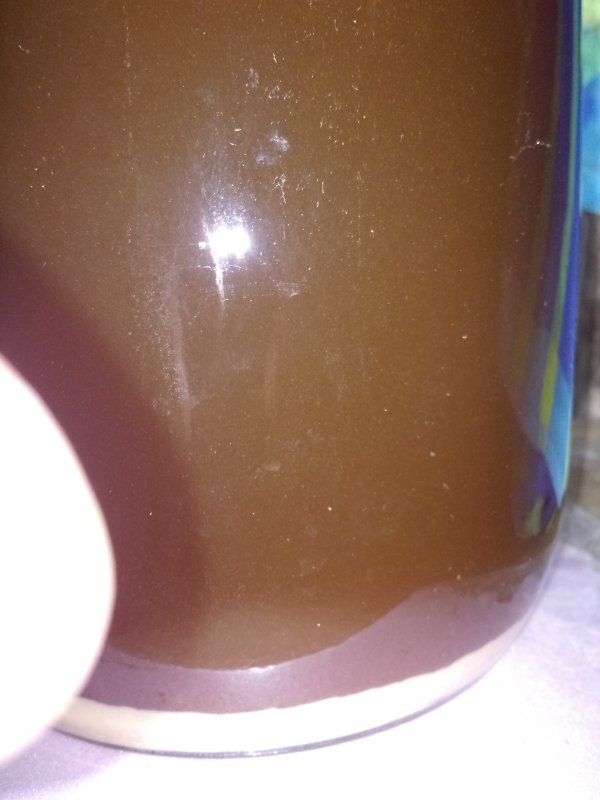 @ 54 degrees I get a bubble through the air lock about once ever 10 seconds. I think that's about the lower temperature limit for Safale K-97. Still amazing for a ale yeast to be able to ferment at such a low temperature.

I would like to experiment more with this yeast but I think I'll do that another time. For the meantime, until I find something better K-97, is going to be my go to ale yeast for German style ale brews.

Fermentis who produces this yeast says: "This ale yeast works at a wide temperature range between 12-25°C (53.6-77°F) but ideally between 15-20°C (59-68°F)." I don't have a lab, but I think fermentis is pretty much spot on. And with an alcohol tolerance of 11% ABV it has the potential to ferment to pretty jacked up juice. Way to go Fermentis!
Y

CrealCritter said:
I brewed my all grain German altbier today and I can't believe I hit my post boil target gravity. I had an excellent brew day, more later...

Wow. that looks awesome. I can't wait to have that on my table with family while on nextflix and chiling out.. thanks for the Idea..

I can't believe it my first all grain and self made recipe, plus my filtered and treated "city" water, actually turned out a good brew. I can tell by the taste my filtered and treated city water should be good for amber and lighter colored brews. It will most definitely need additions for darker brews. But hey I'm quite happy with this Copper Altbrier it's smooth, easy drinking, the bitter vs sweet is well balanced. It has a strong malty aroma that over powers the aroma hops. It could use a tad more aroma hops but it's not fully carbonated yet either. Full carbonation may bring the aroma hops more to the forefront. If not, I'll adjust my recipe for more aroma hops. But all in all I'm pleasantly surprised. I really thought it was going to be aweful - surprise! 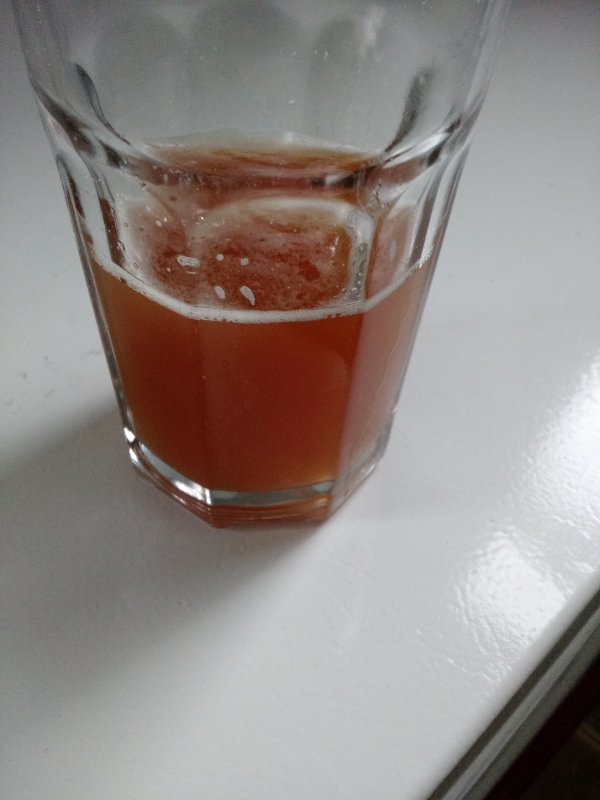 Now fully carbonated and I still can't believe it this is a really good tasting brew. It's my first self crafted all-grain recipe and with city water none the less.

It has the right amount of body and mouthfeel. It starts a little sweet and ends a little bitter but the bitter vanishes quickly. it has a great aroma, that's not overpowering at all. Heck it's even good to look at, being copper in color with a light golden head on the bottom that fades to white on top and with nice white lacing in the glass. I'm not changing a thing about this brew, I like it just as it is. This is now my house brew, something that I would proudly serve to family and friends. 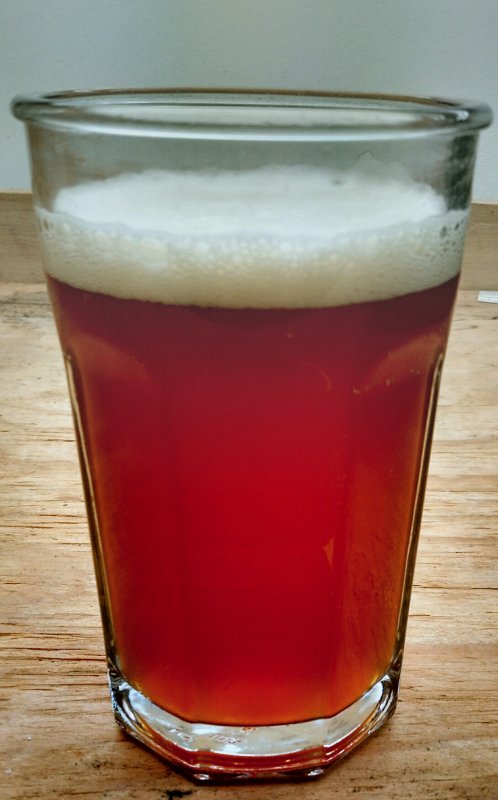 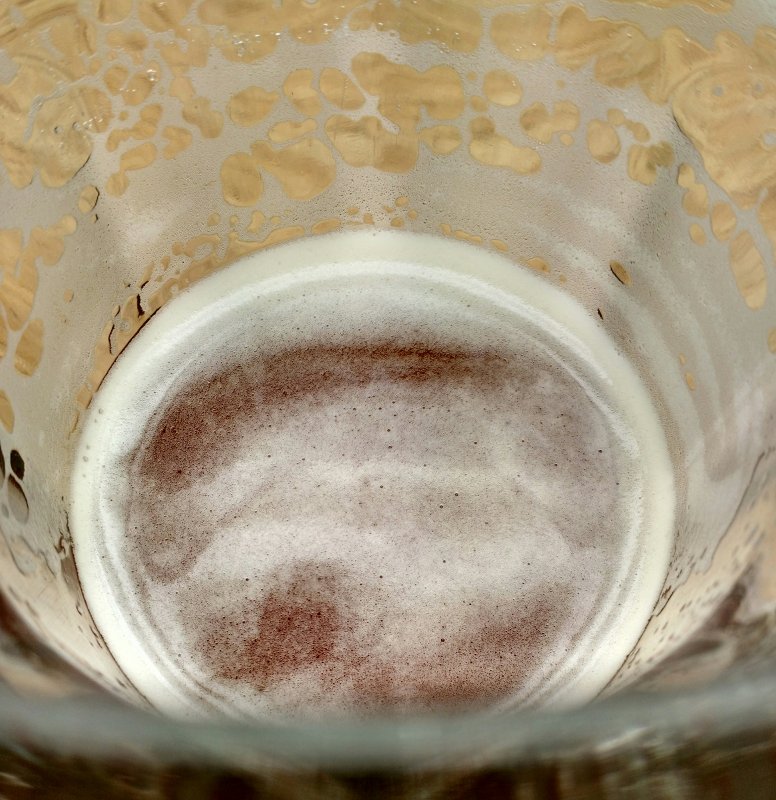 Copper Altbier is now fully carbonated and finished. it's unique and an enjoyable beer to drink. I don't ever recall drinking a beer that tastes quite like this one before. 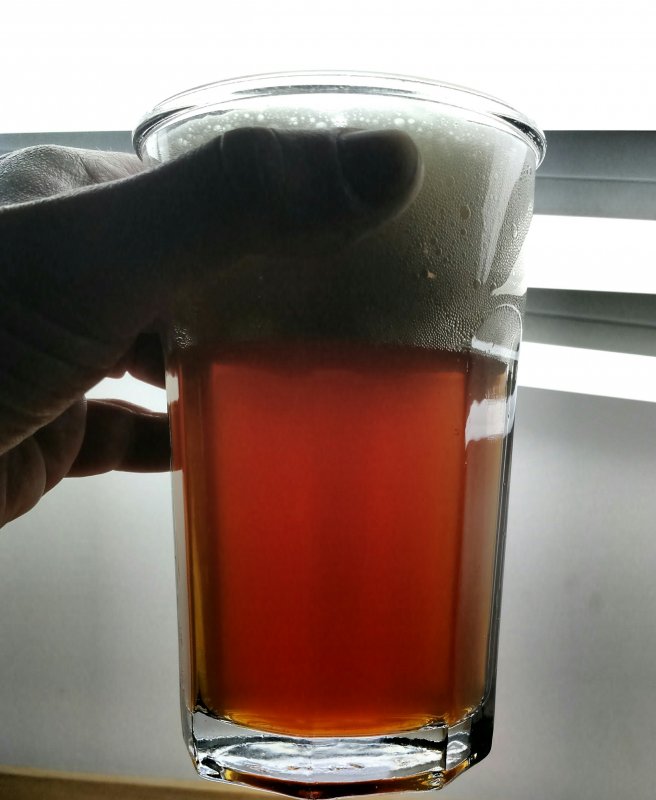