Next up will be a German Altbier. Alt in German means Old and Bier means Beer. So for us Americans this is a Old Beer. Although the name doesn't sound appealing on it merits, It's not that hey this beer is nasty 5 years old beer, it's that the Style is Old. So old as a matter of fact it predates the discovery of Lager yeast. Although, I don't ever recall having tasted an Altbier and even finding a altbier here in the US might be very difficult. But on my quest to understand and brew German beers, I find this style very intriguing.

Current synopsis:
Although I'm sure there are many varieties to the altbier style, two primary distinctive varieties exist that sparked my interest. Northern German and Düsseldorf of the lower lower Rhine region.

The current production of altbier for all of German has significantly declined from it's hayday, to less than 5% of all beer styles produced annually. However in the town of Düsseldorf there are a few pubs that produce only one beer exclusively. One pub produces exclusively altbier, with the exact same recipe they have brewed for over 800 years. It's my understanding that they roll a wooden barrel out of the cellar through the pub and tap it with a simple faucet. They serve steins from the gravity fed faucet.

This experience is explained in one of the books I have (Brewing Classic Styles) see attached pic. What a way to make a living... Why can't I have a job like this? Drink beers from all over the world and write a book or two

As I read the snippet, and the following recipe, it sounds Devine. That is until I read the IBU of 45. IBU = international bitter unit, is a measurement of how bitter the beer is. Good Lord man, that's way off the chart for what I would consider a drinkable beer. I prefer an IBU of around 10 to 12 with an absolute maximum of 20 and even at 20 I don't even want a second swallow unless I find some other quality that interests me. But I usually pour the beer out.

If there is one thing I learned about German beers so far, is that Munich and Pilsen base malts, in varying precentages, make up most of the grain bill and the use of German Noble Hops in varying quantities are used exclusively. The four varieties of the four noble hops are, Hallertau, Saaz, Spalt, and Tettnang. So for me, when I see a German beer recipe if it doesn't contain both Munich and Pilsen base malts and at least one of the 4 German noble hops, I immediately question it's authenticity.

This Cowboy Altbrier recipe with it's use of Magnum high alpha acid hops, is highly suspect to me. It may make an absolutely Devine beer for a "hop head" but I'm not a one of those hop goblins. 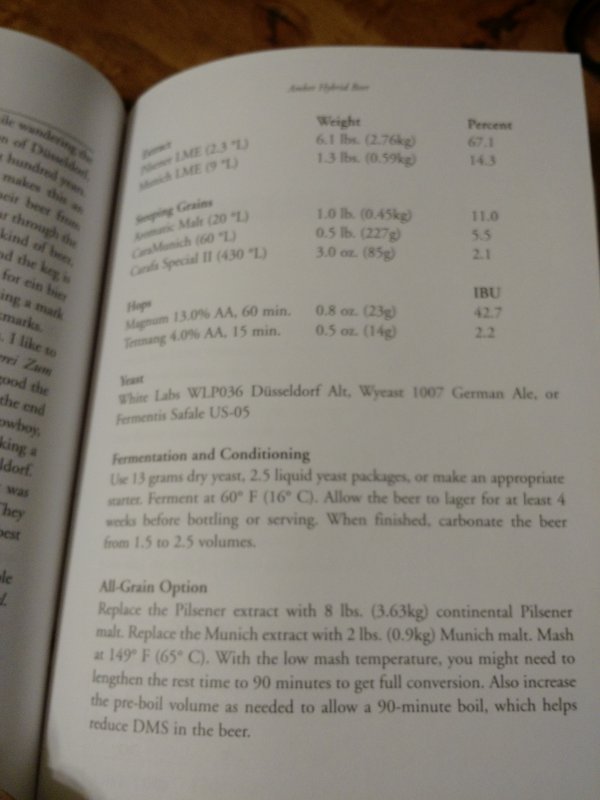 Also, the use of Liquid Malt Extract (LME) is something I simply do not like to brew with anymore. It's so difficult to work with... It goes straight to the bottom of the kettle where it's easily scorched if you don't turn off the flame under the kettle and stir until your arm falls off. It's about the consistancy of molasses in January and next to impossible to get all of it out of the jar even with piping hot water. So if I did a little tweaking I think I "might could" brew an acceptable (to me) Düsseldorf Altbrier.

It's also interesting to note the author's difficulty with the use of hops to brew a representative Düsseldorf Altbrier he enjoyed so much. 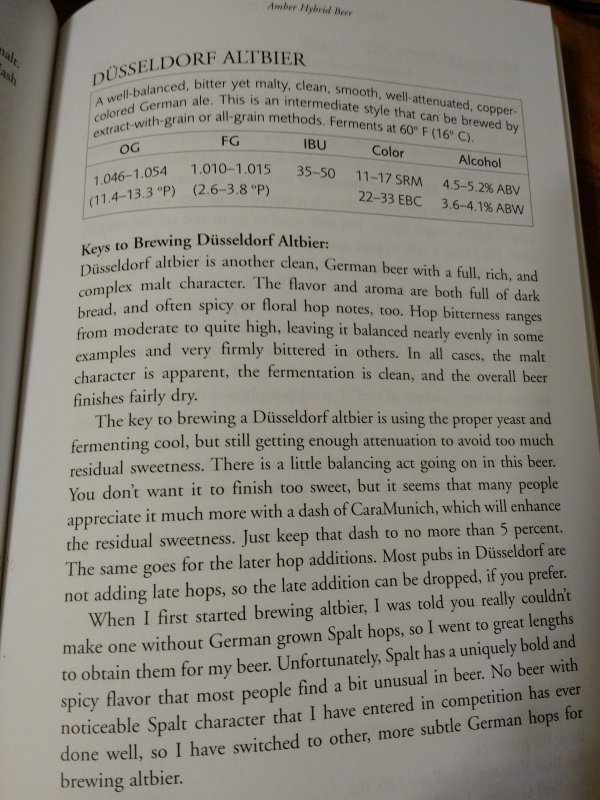 After much reseach, I crafted an altbier recipe that I think will turn out to be a decent brew. I chose German noble hops Hallertau because I already like the bittering flavor it produces with German pilsner malt. For aroma I'm going with German noble hop Spalt, because of it's medium aroma intensity, that's pleasant and hoppy.

I'm calling my recipe Copper Altbier, it should turn out to be 11~12 SRM (Standard Reference Method) which is a nice copper color. I'm shooting for a good house brew to keep on tap year round, like the pubs do in Düsseldorf Germany. This will be a lower alcohol content brew and hopefully a nice ballance of bitter and sweet. I'm sure I'll tweak it some as I brew it more often.

This is my first all grain recipe. But feel free to copy & brew. If you need a recipe for Dried Malt Extract (LME), substitute the 10 lbs of pilsner whole grain for 6 lbs of pilsner LME. Perform a mini-mash for the 1 lb of Carmel whole grains in 1 gallon of water @155 for 30 minutes. 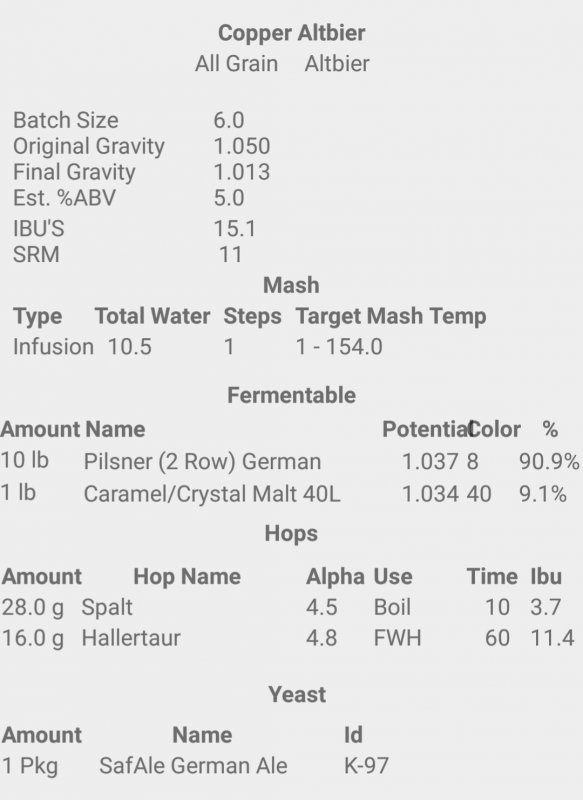 This is how it should look when it's ready to drink. Copper body, with a light copper colored head, a Copper Altbrier. 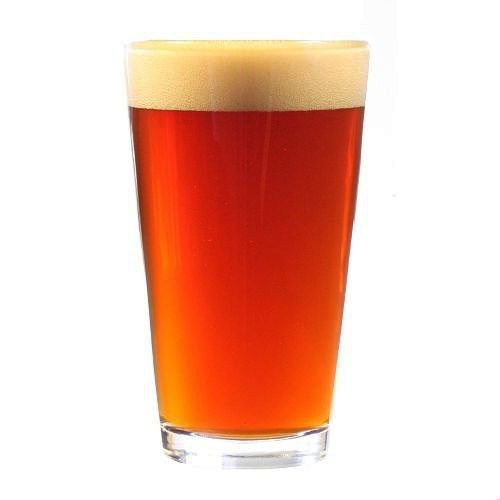 for LME mix it with some of your kettle contents before adding to help make it easier to incorporate. will be much easier...

flowerbug said:
for LME mix it with some of your kettle contents before adding to help make it easier to incorporate. will be much easier...
Click to expand...

LME is a pita no matter what you do with it, it's just thick sticky goop. There ain't much liquid in Liquid Malt Extract.

I had to change up a couple of ingredients for the brew based on availability from ritebrew. It happens... No biggie, this is more of an experimental beer than anything... My order has shipped and should be here the middle of next week. I plan on brewing my copper Altbrier all grain next weekend. It'll be a good lower gravity brew to try out new brew gear for the first time and feed the chickens and turkeys at the same time. 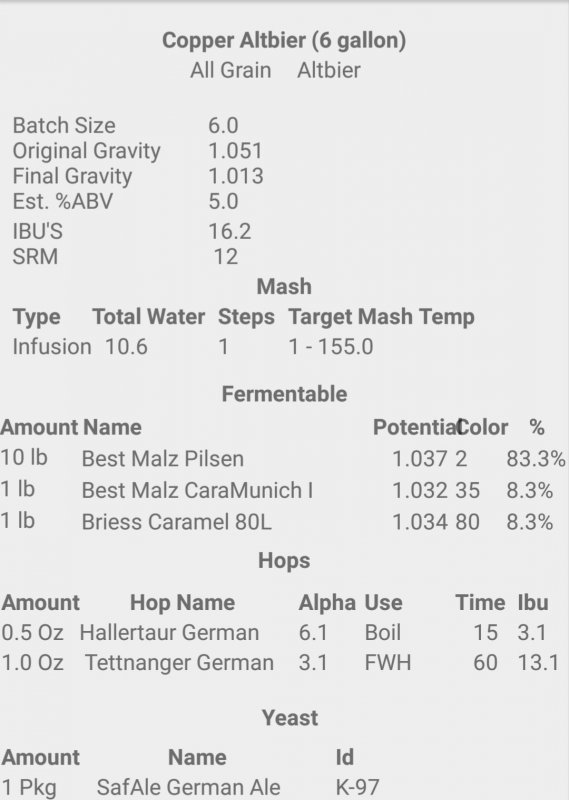 My ingredients are in. Since I haven't had time to mess with my old hand crank grinder, I went ahead and had the brew shop owner grind malts for me @ an additional .10 a lb. But I got a .20 a lb discount for ordering over 10lbs. So I still came out ahead of the game

This should be interesting... It'll be my first all-grain attempt and with a self created recipe. Time to put prior experience, book learning and study into practice. Wish me luck. 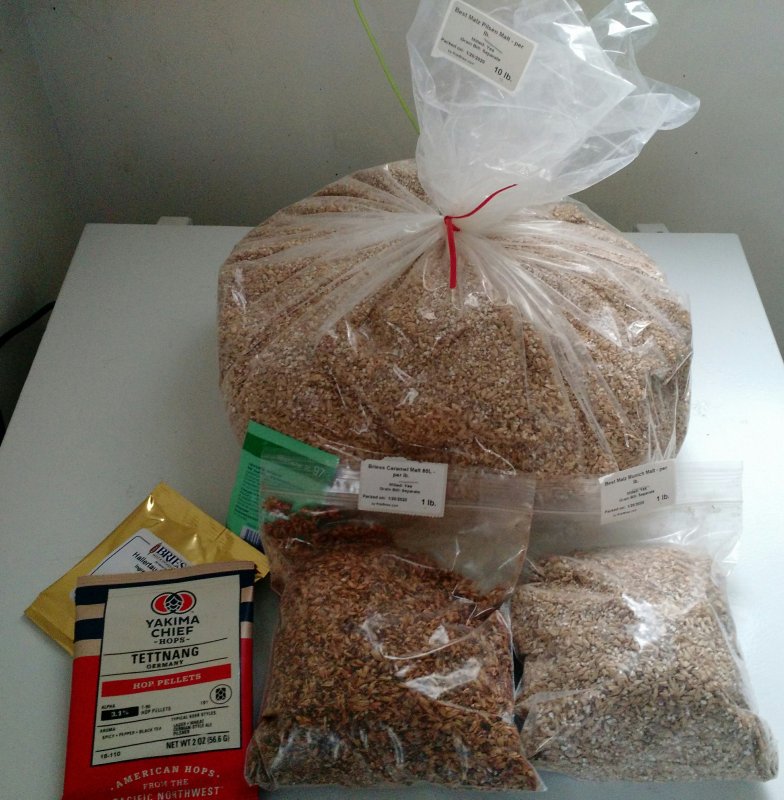 I'm quickly coming to the conclusion, that I need to build myself a brew house. I'm thinking something small, detached and on skids, something like an 8'x12' with a 8' tall ceiling. So I can load it on my lowboy trailer and move it easily, for when we move deeper into the woods.
Last edited: Yesterday at 7:13 PM
You must log in or register to reply here.
Share:
Facebook Twitter Reddit Pinterest Tumblr WhatsApp Email Link