baymule said:
Do you provide a certificate, telling what wood and how you made it, with each guitar?
Click to expand...

I do however print out the wiring schematic and glue it to the inside of the electronics cover. Only because the basses I build have two phono jack's, one for mono and the other for stereo. Also both pickups have their own independent volume and tone pots. The three-way switch allows you to select either the bass pickup, both or the treble pickup. So the wiring is a little bit more complicated than most bass guitars.

Yes! a Birth Certificate! With a description how and with what woods it was made from, and Crafted Especially for Customer Name. Your customers will love it.

Commission - it's not exactly a bass but still a guitar bolt on after market neck, tilted and glued in place, two humbucker, pickups, one stacked volume/tone knob, single mono plug. Really weird body style but hey the owner loves it & paid in full so who am I to judge? 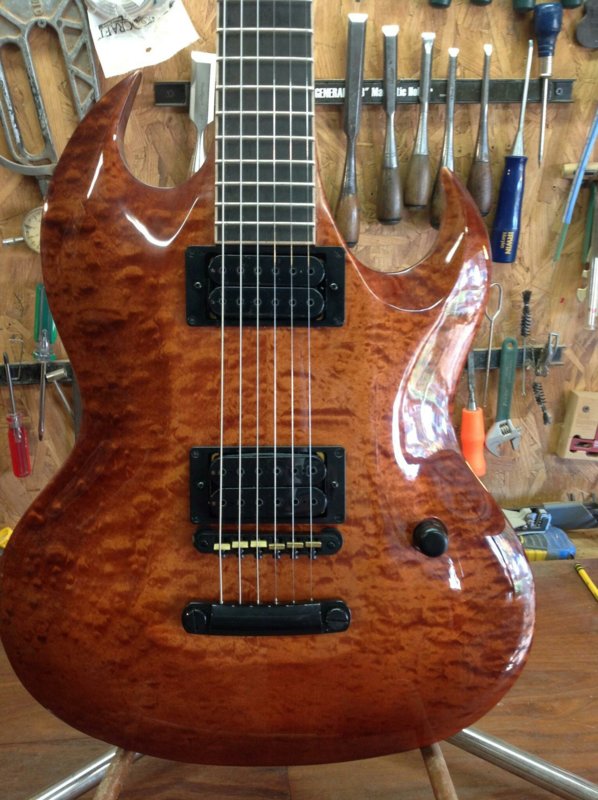 Absolutely gorgeous! What is the wood?

frustratedearthmother said:
Absolutely gorgeous! What is the wood?
Click to expand... 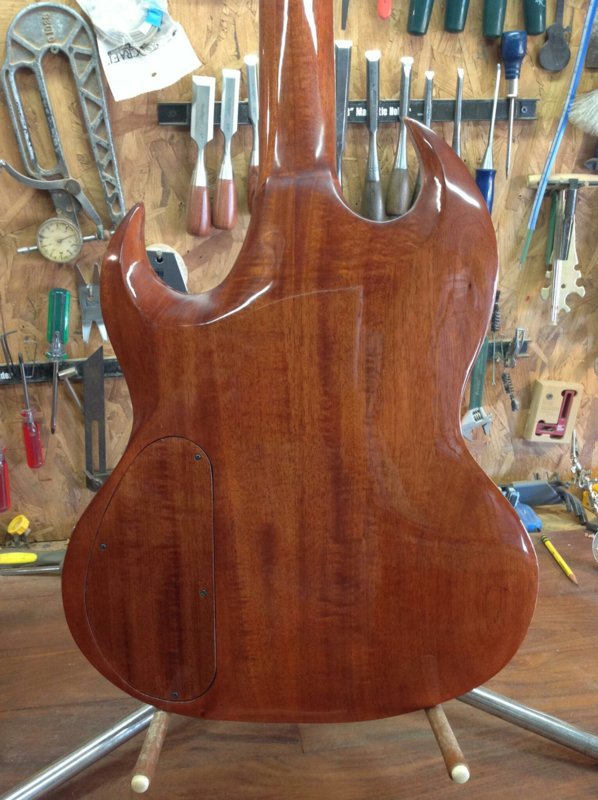 How does the single "stacked" control knob work—with regards to 2 pickups, and tone control, volume control...?

How does the single "stacked" control knob work—with regards to 2 pickups, and tone control, volume control...?
Click to expand...

Pickups are wired in parallel so both get the same volume and tone adjustments. Both are also filtered through a .22 uf capacitor.

It's the placement of the pickups that makes the difference in over tones / harmonics. The pickup closest to the neck is the bass pickup it has a warm tone. The pickup next the the bridge is the treble pickup and is "punchy/grungy" tone. Combine them both together and you got a warm punchy sound.

This guitar is strictly a rhythm guitar... Even the fretboard is pretty flat for making chords easily.

Ya'll are speaking latin, lol! But, it's still a cool geetar!

frustratedearthmother said:
Ya'll are speaking latin, lol! But, it's still a cool geetar!
Click to expand...

We can teach you the lingo...

My DH and were out at my oldest son's last weekend. There we're a few people there I never met before. But you know the conversation always turns to music at some point. Then my son had to open his mouth about my playing and building bass guitars. Truth of the matter is I really wished I could play as well as I used to but I have old hands that just don't move like they used to anymore. I still have timing down well and I could stand in for a few songs but I wouldn't stand out if you know what I mean. All I'm good for is to just hang in the background now. I really don't have time or the will to play until my fingers bleed like I have several times before to get limber enough to seriously play in a band again.

I've seen bassists reach this point and then continue playing with gloves on until their fingers heal enough to play without them on. That's determination right there!

About like anything else really though... The more you do the better you become at doing it.

Very few musicians will willingly tell you that's what it takes. Only one song I know of where "played until my fingers bled" that I know of that's the song called Summer of 69 by Brian Adams