tortoise said:
DS7 appears to have pink eye. I was able to snag a doctor's appointment in town tomorrow morning (online scheduling). Texted school to excuse him. Texted bus to cancel morning pickup. Texted animal shelter manager to let her know I'm not coming in. (I love text messaging! and online scheduling.)
Click to expand...

Isn't it amazing! No waiting on the phone for someone to answer and 50 questions just to get an appt scheduled. Hopefully it isn't anything too serious, enjoy your day!

Trying2keepitReal said:
Isn't it amazing! No waiting on the phone for someone to answer and 50 questions just to get an appt scheduled. Hopefully it isn't anything too serious, enjoy your day!
Click to expand...

His pink eye appears to be viral, but we got antibiotic drops just in case it gets worse over the weekend.

if he's not over it by Sunday am we'll use the drops so he can go to school.

Busy day, but I have done everything on my list.

Buddy might stay here longer term. He's on his 3rd night in a row. I didn't walk him much at all today and he was tired out faster. If his family does not take him, I plan to make him a weight pull harness and sweet-talk DH into making a tire drag so I can wear him out faster. I was able to clip a few more nails. He objects to restraint but doesn't mind the clipping part. I need to bathe him. DH objects to smelly dogs. I power washed his kennel - it was previously used/stored in the barn. Washed blankets, harness, collar, etc.

I started teaching Boi to wipe his chin. He drools and drips, especially after drinking water. It's a source of marital conflict. DH saw a video of a dog trained to wipe its chin and shared it with me tonight. I started training right away.

Buddy looks at home with Baymax. He was begging to get on the couch so I showed him the mattress in the big dog kennel. He went right to sleep. 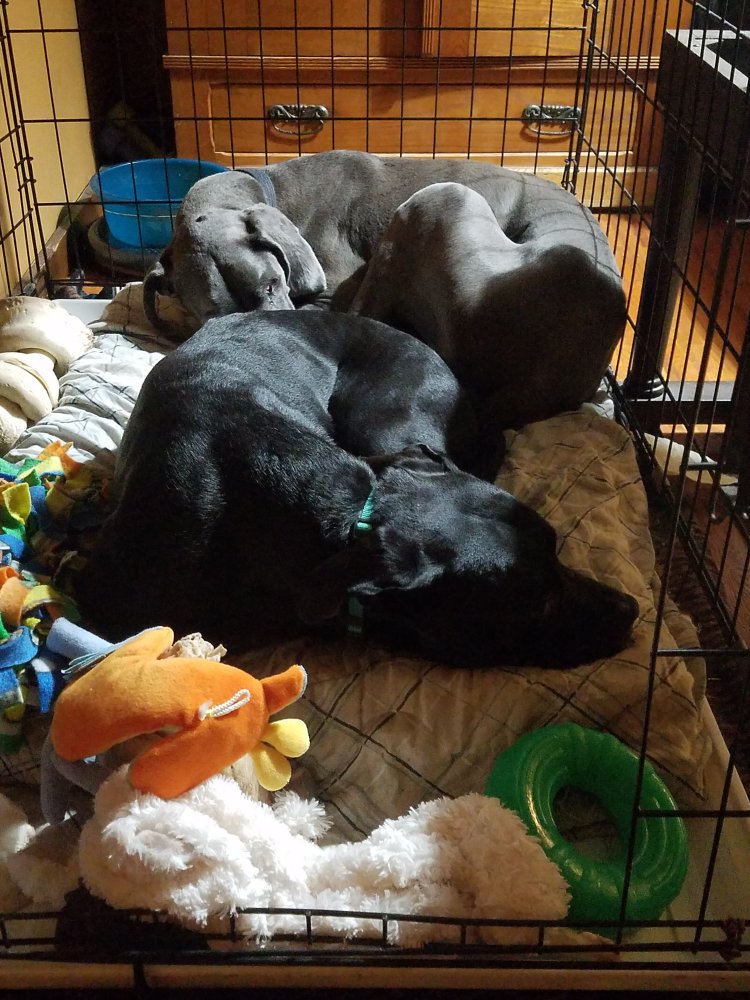 Buddy slept loose in the house last night until about 2 am. He started pacing so I put him in his kennel. I value my sleep! He did not get a walk this morning. He played with Boi a little bit in the house and they're both sleeping on the floor. This supports my assessment that Buddy's behavior problems are due to chronic frustration. I think he will be fine once he gets his needs met consistently. He has some odd behaviors like drinking water until he vomits. I expect that one will stop too. When I got Boi he had been kenneled excessively and also had the frustrated water drinking behavior.

I ordered a raised feeder to use for water and a dog drool wiping station. It will arrive Wednesday. I need to rearrange my laundry room to fit it. I have had their water bowl in the bath tub in attempt to minimize drool. (it didn't help much).

Buddy is having a hard time. Not sure what is going on for him. He stopped playing with my dogs and obsessively humps Boi. (Buddy is not neutered at 7 years old

) He didn't eat food yesterday, not this morning and wouldn't take treats this morning. He's not interested in enrichment items and toys other than a chew treat, max 1/day and he already had it. Yesterday he panted and paced most of the day despite a long walk in the morning. I kenneled him with Baymax overnight which helped him settle down. He's annoying AF today, TBH. I kenneled him for my sanity now, but that will increase his frustration in the future. Looks like he will need a long walk this afternoon. IDK. I'd rather find this out now than in winter. If his family can't take him and he can't fit in here, he'll get put up for adoption through the local shelter (and probably stay here as a foster for them because of his frustration behavior problems.)

The principal has recommended DS15 for expulsion, so now it's up to the district superintendent and that hearing process. I'm not going to hire a lawyer or defend him. I won't pull him out of school to avoid it. He did what he did, and he has to deal with the consequences of it.

DS15 has had quite a few better-than-his-usual days, but he is somethin' else today. I'm having him split wood. He filled the trailer but whatever, he can keep going. It keeps him away from the house and barn when he's in a bad mood.

I haven't walked for a few days and I dont feel as good. DS15 had a bad day again. Uff. I'm trying to relax and self-care. I wish i could get more done, but I'm feeling stuck.

DS15's expulsion hearing is next Monday.

Hope things look up for you soon!

frustratedearthmother said:
Hope things look up for you soon!