Egg and meat production in poultry

Thought I'd start a thread about goals for a homestead flock...at least, my goals, and I assume the goals for many who are trying to produce food on the homestead. Chickens are a big part of that here, as they are our only livestock right now.

Last year I didn't keep track of egg numbers, though I wish I had. This flock has been my most productive flock thus far in 40+ yrs of keeping chickens, not to mention they also stopped in the spring~at least some of them~to produce some meat and flock replacements. My hatch rate was dismal this past year but I think I may have found the problem and it shouldn't affect next year's hatch.

My new pullets(3 pullets of mixed breed produced in this spring's hatches)are starting to lay and it's right on time for them~before, on or right after the 6 mo. mark. That's the timeline I shoot for in my flocks for maturity in hens....anything more and one is feeding a hen that is not producing when others are, which already makes her a cull. Why feed a hen that is slow to produce when you can breed and keep hens that produce at the normal time?

On the other hand, I wouldn't want a precocious producer that starts at 4-5 mo. either, as they tend to burn out earlier in their laying life and not just by those months but by years. That's why most breeders shoot for that magic 6 mo. POL, as it seems to indicate that hen will be a good and steady layer for a long time...at least, that's the theory. I'm sure results may vary.

Anyhoo, one has to shoot for some kind of standard when wanting to keep good production rates, be it in eggs or meat, so it may as well be that average POL age of 6 mo. The predominate breed in my flock is White Rock and all the mixes are from my WR male and my WRs all seem to hit that mark of 6 mo., though I've heard from WR breeders of their birds not quite making that average and maturing later at 7-9 mo.

So far, a full third of my flock are resuming laying, which is rather remarkable for me, even with new pullets coming into POL, and that number seems to increase each day this week. Usually my flock will take a bit of a break from molt to mid to late Dec. and then resume laying. One of the hens who have resumed is 6 yr. old, so not too shabby for an old lady.

As of yesterday and today, I'm getting 6 eggs per day and that may increase as time goes along. I had saved back eggs from August, Sept, and Oct before the flock went on hiatus, but now I need to start purging those eggs out to family to make room for the influx of fresh eggs...who knew? I'm happy about it, but it sure was unexpected this soon.

As spring rolls around, I'll document hatches for meat and flock replacement here and hope to hear from everyone else on the same. 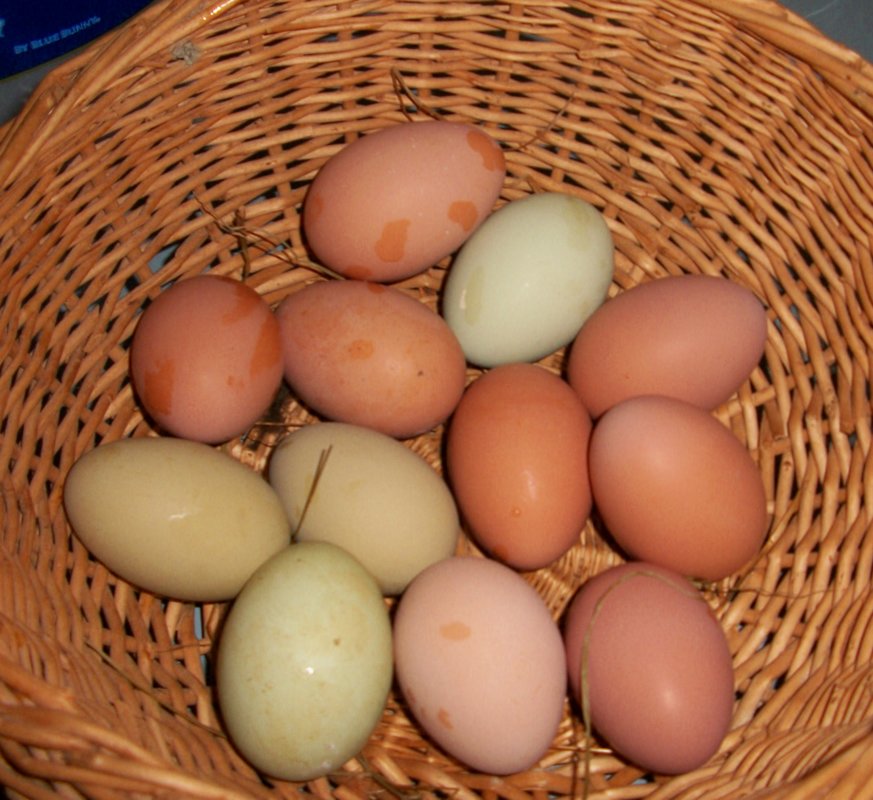 I started with good egg layers. I'm gonna keep breeding them for fatter chickens. And see how it goes

Chic Rustler said:
I started with good egg layers. I'm gonna keep breeding them for fatter chickens. And see how it goes
Click to expand...

They are all advertised as dual purpose. Mostly RIR, BO, and BR

This is still my first year with chickens so I don't have a methodology. But I do plan on having a holistic approach as I want a sustainable flock that produces eggs, meat, work (compost/garden), can forage/pasture well, tolerate the cold, and have a good temperament suitable for a family with young children.

But, I have lots of room, and years ahead of me, so I may choose to actively specialize in the future. I'm taking these first few years to try a few breeds, increase my flock numbers and get a good feel for what works and what doesn't on our homestead.
N

We played around with breeds for a while amd we have settled on 3 main breeds. The dominique is our primary egg laying influence, though they only average 3-4/week. The others are primarily for meat, as they're not great layers. We had a random partridge rock that hatched out some amazing layer offspring with our Dom roo so we have some funny crossbreeds in the "layer flock". But the Dominique remains my favorite because they are hardy, good mothers, fantastic free rangers (they ignore grain when the weather is good).

I do something similar here, NH. I use BAs to be the primary egg layers, while using the WRs~though also excellent layers~for brooding of chicks and adding meat to the mix. So, while the WRs are taking time off to be mothers, the BAs can still lay onward.

I also use them for mixes, as the mixes lay very well but have meatier carcasses than the BAs. The males of that mix grow faster than the WRs and finish out with the same meat quality, so they make for great meat production alongside the WR males.

A 4 mo. old WR/BA mix cockerel, eating mostly foraged feed, so no penning and finishing here....he'll fill out even more by butchering time at 5-6 mo. 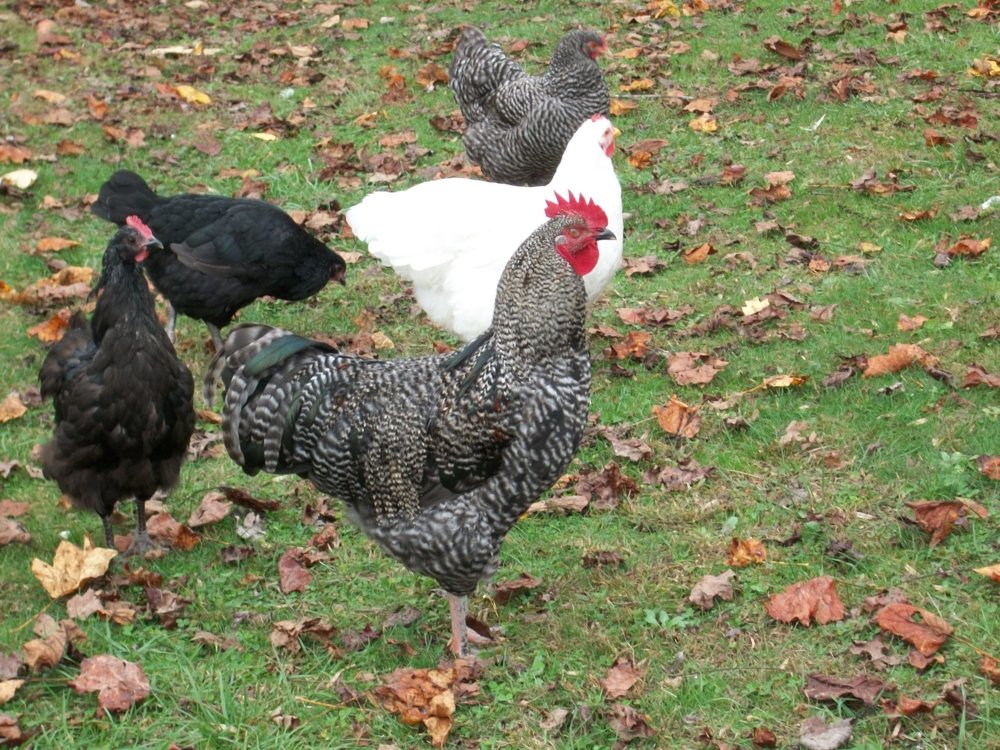 BA/WR mix pullet at 4 mo...she'll put on quite a bit more bulk by the time she matures, making for a pretty heavy hen at the end. 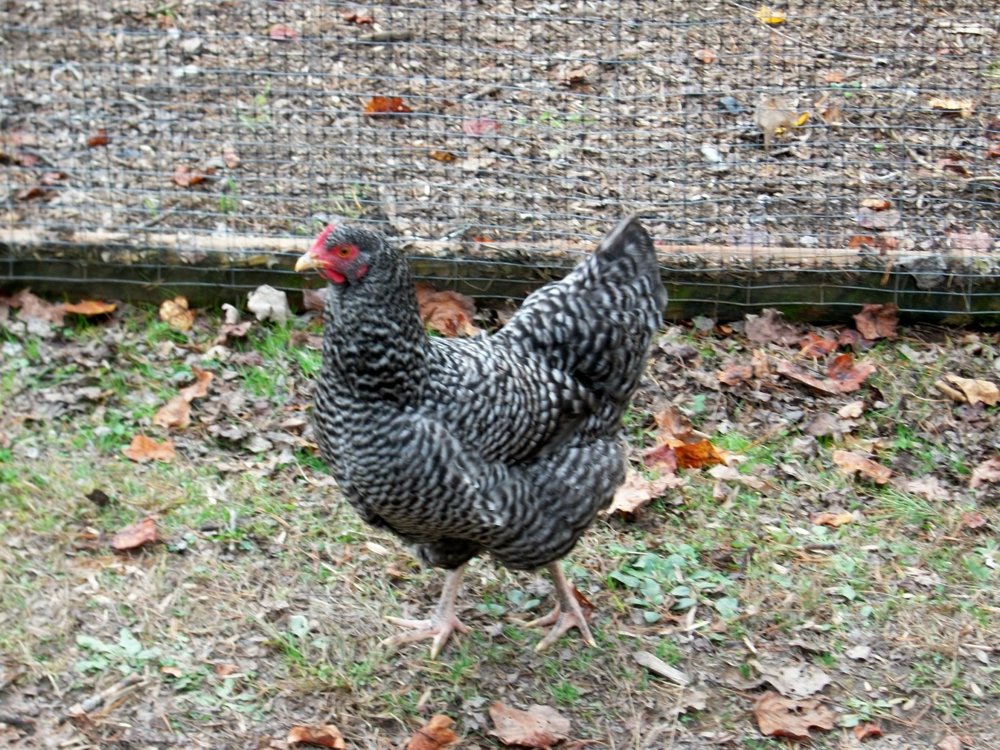 This past season I threw a wild card into the mix, just for funzies...I bred/hatched out a few eggs from an old EE hen my sister gave me, who has laid like a machine for her for many years and has held her own here, in laying and also within the social structure. Those EE mixes have a smaller body than the WR/BA mixes, but still larger than the EEs. As of right now, they are maturing at the right time too.

The little old EE hen, in her 6th year and still having lengthy laying cycles for her age.... 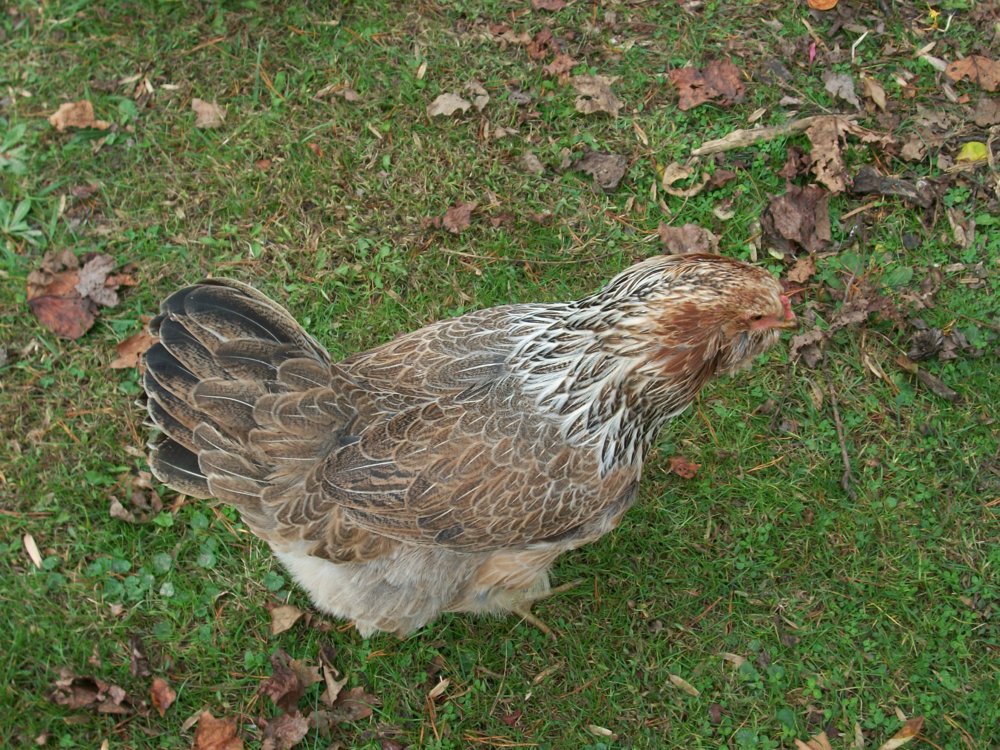 And one of her daughters....both parents have a barred gene, so all the offspring have barred feathering and her pea comb. They come out about the size of the BA hens. 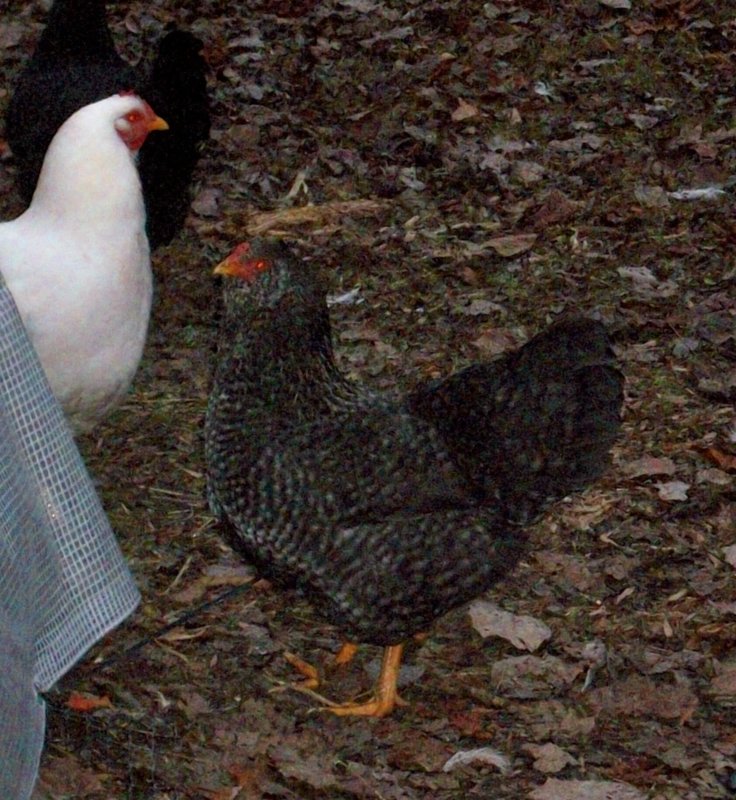 The BAs make a great work partner for my WRs in my flocks, so they will continue to be my second breed choice. I doubt I'll ever get into EEs at all, though this little old hen has impressed me enough to allow her to pass along some genetics for my mixed flock. Her egg color trait also insures I'll not be putting their eggs into any hatches if I don't wish to do so.
M

I have some Marans that are good layers, nice size for a dual, non-aggressive but hold their own. Some of their eggs and some BO eggs were used for hatching and I am really pleased with the pullets thus far. Just starting to lay at 6 mos. Another group who is 1 month behind should start up soon. These are a smaller bird but VERY good foragers and EXCELLENT setters. They are from some blue egg layers I raised from day-olds who crossed with a MaransXAmeraucana roo. Should be fun. I expect them to lay in another 3-4 weeks. Hope to get 7 young roos off the feed line and into my food line next week. LOL They don't lay eggs & sure don't need their help in the breeding line-up. Hate the job but normally love the results. We'll see. Everyone free ranges + gets fed. These boys feel pretty well filled out.

We started with RIR as a dual-purpose, but we don't like the carcass. They're stringy and awful and their legs are so freakishly long we ended up buying a bigger crockpot. We had trouble packing them for the freezer too.

We have f1 and f2 Buff Rock and Dark Cornish crosses. So far they're quite disappointing. My strategy is to hatch chicks, grow them out, and keep the best. I'm not worrying much about eggs. We have more than we can manage and no way to know who the good layers are. Except three white leghorns that lay white eggs, but I won't incubate any of those and cross them in.

I'm looking at comb type for winter hardiness and temperament. My birds are flighty AF, but if we just can't catch a hen, I want her culled. We're getting a dozen eggs a day and will likely cull some hens. Unfortunately, DH picked hens to give away without my input. Which likely means he grabbed the easiest to catch - which are the ones I'd want to keep.

We will probably be looking to add some new birds this spring or next year to boost genetic diversity and see what we can get the birds to produce.
M

Yep, I will add some new eggs under my broodies this Spring, for the diversity. I like the heavier breeds as much for their lackluster interest in flying over fences as much as anything else! But I have found the Marans to be very athletic, in spite of their size! Clipping wings is an option but, one I do not like to use as it hampers their ability to escape if being attacked.