Here's one. Start with a ham. Cook it and serve as you normally would. When you get tired of sliced ham, get creative.

The amounts of these are determined by number of people you are feeding. For me and my husband, usually make it with 3 eggs.

Pour scrambled eggs in HOT greased skillet. Layer other ingredients, top with cheese and bake at 350* until eggs are set. Cut in pie shaped wedges and serve. Easy and so good! You can use anything in the frittata you want to, just put eggs on the bottom and cheese on top!

Dieting? Wow not a good word. I just eat what I want & IF the pants get snug, reduce quantities.

I love buiscuits & gravy. I especially like to have chunks of sausage in it, not just the pans drippings. YUM! It IS a meal!!!!

Don't care for the gizzards but my dog does. Love fried livers.

At my house, I always do leftovers. Quiche is a great option for using up a lot of eggs, plus little bits of this & that. Onions, I fry into just about everything -- love onions, garlic. Its healthy for you.

Britesea, I love that type of salad! Especially on hot days.
N

I am loving this. I have a giant recipe collection from before I started homesteading (and when I worked full time) but when I look through it now, all I see are dollar signs! So I'm learning how to be a frugal cook. And that every meal won't necessarily look like something from the Food Network.

Carry on, I love it!

I blame it on the rain, lol. I'm not working as hard as I usually do...no garden this year - too much rain. No fence reconfigurations - too much mud. No 'working' with the horses - too nasty. Not enough walking around the pasture - too sloppy. Not enough of anything except running outside just long enough to do what I have to do and then run back in. GRRRRRR.

And, now back to the topic of this thread. Menus...

We don't eat a lot of carbs at our house because of Dh's diabetes. No potatoes - but rutabagas are a great substitute. I made soup of leftover ribs and used rutabagas instead of potatoes. I'm going to try to grow some because potatoes are cheap - rutabagas aren't.

Bread - in my other life (pre - current DH) I made bread several times a week - now we eat the Ezekiel bread, if we eat bread at all. And, it's not frugal either.

So, we cut down in other areas. We both love a good bean soup - and beans, along with being frugal, are full of fiber and fiber is good for diabetics.

In fact, we love soups of all kinds, but especially veggie based soups with just a little meat, or no meat at all. Cabbage is our go to veggie for soups and cabbage grows well! If not, it's usually priced competitively. I freeze little bits of veggies in a 'soup' bag to throw in the pot.

The biggest way for us to 'save' is to make sure that nothing goes to waste. I get downright miffed if I have to toss something that's too far gone for the chickens and/or hogs. But, at least it can usually go to the compost pile.

I've made 'chili' out of winter squash and it's darn good! My picky son ate a big bowl of it and proclaimed it downright edible!

Cream corn-home made of course!

Fry up skillet of bacon, set bacon aside
Dump package of cream corn in the skillet. If too much grease, pour some put, but you want some grease in the skillet. Don't stir to mix it up. Crumble bacon on top and bake at 350* until the edges are brown.

Debone the meat, toss bones to dogs that are drooling all over the kitchen floor, watching your every move with intent stare.

1/2 pound seedless grapes, cut in half.

A glop or two of mayonaise, just enough to hold it all together.

@Mini Horses pointed out on @frustratedearthmother 's thread that you can use plain yogurt instead of mayonnaise for watching calories.

NH Homesteader said:
I am loving this. I have a giant recipe collection from before I started homesteading (and when I worked full time) but when I look through it now, all I see are dollar signs! So I'm learning how to be a frugal cook. And that every meal won't necessarily look like something from the Food Network.

Most recipe books have ingredients in them that I never heard of and wouldn't find in small-town-America anyway. Use what you have. Grow what you like, plus try at least one new vegetable each year. Plant berry vines/fruit/nut trees and plant types that you don't find in a grocery aisle. We planted the usual peach, plum, pear, apricot trees, but I also planted a loquat tree and plan on planting juju-bee trees. I ordered wolf berry AKA goji berry vines and will set them out this fall. I picked wild plums off fence rows this summer and made some fabulous jelly. My husband helped scrounge the fence rows with me, not caring about people driving by staring at us. Such a departure for him! LOL
N

We have held off planting anything permanent because we weren't sure if we were going to stay here... Taxes are so high! But we have wild blackberries I have foraged for (my daughter loves helping!) and we always pick something new each year for the garden. My daughter gets to choose this year. We have SO many unmaintained apple trees, and are surrounded by stone walls. Pretty sure there was an old homestead here, it's pretty cool. We just have to figure out what all these apples are!

Yeah seriously what are these weird ingredients?
M

@frustratedearthmother, rutabagas are easy to grow. We grew a bunch of them earlier this season. Then, we dehydrated them and will use them in soups when the weather cools off. I just put in another crop of them for the fall.

@baymule, I'm glad you specified the rooster should be dead in your recipe!

OK...here's a real frugal recipe taken from a family cookbook one of my aunts put together about 20 years ago. She asked for contributions. I thought this one was "unique". I guess this meal was eaten by my father as a kid growing up on the farm in the 20's and 30's. 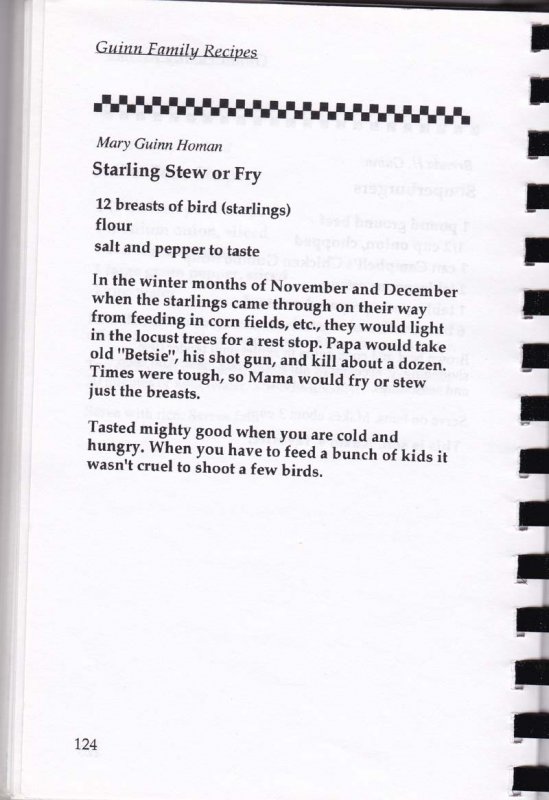 I'd eat a hundred of them....last year had a nesting pair of bluebirds (don't see a lot of bluebirds in my part of the country) and a starling ripped the male bluebird right out of the nestbox and killed him. Stoopid starling...

This tip isn't exactly a frugal menu - but cooking as much as possible in a crockpot beats having the stove going all day. And, I use a toaster oven instead of the big oven whenever possible.
You must log in or register to reply here.
Share:
Facebook Twitter Reddit Pinterest Tumblr WhatsApp Email Link