I thought I'd start a thread on orchards so that folks can throw ideas back and forth and maybe learn a thing or two. I know virtually bagel about orchards, though I have a small one now and have lived on land with a larger one, I know just enough to get myself in trouble and harm some trees.

Right now we have 14 apple trees, most of which were planted over 20 yrs ago and no one knows the variety. We planted 4 saplings last year my brother brought out...their names escape me. I know two of the older trees are early transparent varieties, but that's about it.

We also have 2 peach trees, both cling peaches, one yellow and one white. Last year was the first real crop we've had on them in the 20+ yrs they've been on this land. Squirrels and deer usually ate all the peaches before we ever got to see one ripen, but things have changed here and no squirrels or deer are getting to those trees now. I also pruned and fed those trees for the first time in their lives and they started producing.

Last year we had a good little crop, what we could keep from the dog and the chickens. The same dog that kept the squirrels and deer away is also the worst predator of the fruit, sad to say. This year I'll surround the trees at ripening time with deer netting so that I can try and keep more for us.

We had to prop branches due to the weight and will have to do so again this year. Last year I froze them, but this year I'll can...the frozen peaches turned to mush when thawed. This pic was some of the unripened fruit I had to pick while still unripened to keep the animals from eating them...placed them between two sheets and they ripened pretty quickly. 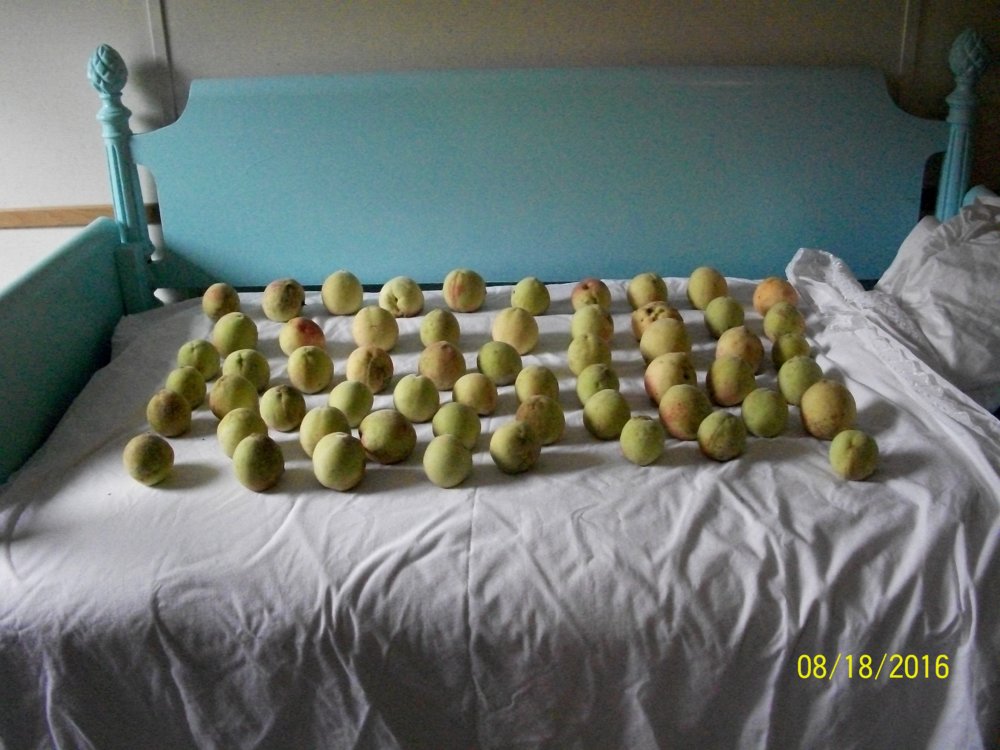 Here's a few from last year...the marker shows the relative size of the fruit.

I pruned and fed the apple trees a few years ago, which had not been done in all their lives, and started getting fruit....but the squirrels stripped them before any fruit could ripen. This year I have cats on the land and I haven't seen a squirrel for a good long while, so we may just get to taste the apples on these older trees for the first time.

I made some mistakes in pruning when I did the initial pruning and these trees will likely take some long time to recover from that, if they ever do, but they are still trying to live and produce, so I'll not lose heart.

Anyone else trying to grow food in the trees? I know Lazy Gardener has trees, shrubs AND vines of fruit she is growing on her place, so I hope she'll discuss those here.
N

I have some seriously overgrown apple trees here that haven't been tended to in who knows how long. Would love to know more about how/when to prune. I know you have to do it a certain time of year, just don't know what time of year that is...

They usually recommend pruning around/before the end of January, before the sap rises into the trees.

I'd go on YT and study up on how the professional guys do it, there are a few vids on the topic and I haven't watched them yet but I'm betting they will give you some good tips with which to go forward on your trees.

Here's one series on the topic:

That's great thanks! Sent the links to my husband, he's more apt to be the one doing it. Many, many very old trees here. Rough shape, most are rather tall... Pretty right now though! 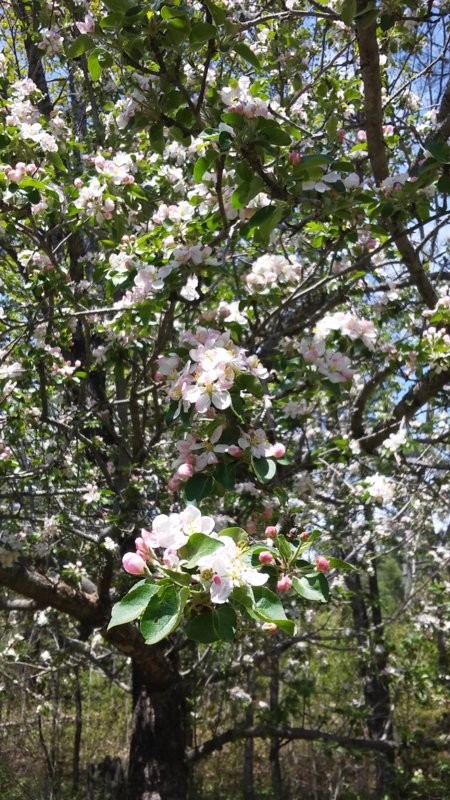 We have one mature apple tree. DH thinks its shape is pretty and says DON'T PRUNE IT. We have young fruit trees, I'm trying to learn to prune and set them up well. Intimidating. And a goat broke the leader branch off most of them.

I'm also interested in how to care for these trees. I'm all ears.

I've got several fruit trees - wouldn't exactly call it an orchard though. Citrus fruits are pretty easy to grow here. We've got several lemon trees that bear profusely. Unfortunately, I totally forgot about my baby lime tree when we had our one and only freeze last winter and lost the tree. But, I've got two persimmons, a kumquat and two pomegranate trees also. None of them are mature, but I get a couple of persimmons a year and they're sooooo good! My neighbor has a blood orange that does well here - I need to get a couple of them too. It's hard to get stone fruit to do well here because we just don't get cold enough. But, there are some low-chill varieties that will sometimes do well. We have a great nursery about 45 minutes from here - not one of the chains - but a really nice one that stocks mostly stuff that does well here. I need to go shopping!
M

I have a plum tree that I planted about 15 years ago...before goat kids were being produced here. It has produced well but some tiny bug gets on it & ruins the fruit. I need a more controlled spray schedule. Then, some years, our weather does not help. Too warm, way too early & it blooms. Freeze then kills bloom & no fruit. This & last year it happened. Here it is mid Feb when we had 75 for 2 weeks, then 30 for next two ruined it. Last year bloomed on time & noreaster blew thru, all blooms/fruit sets gone! 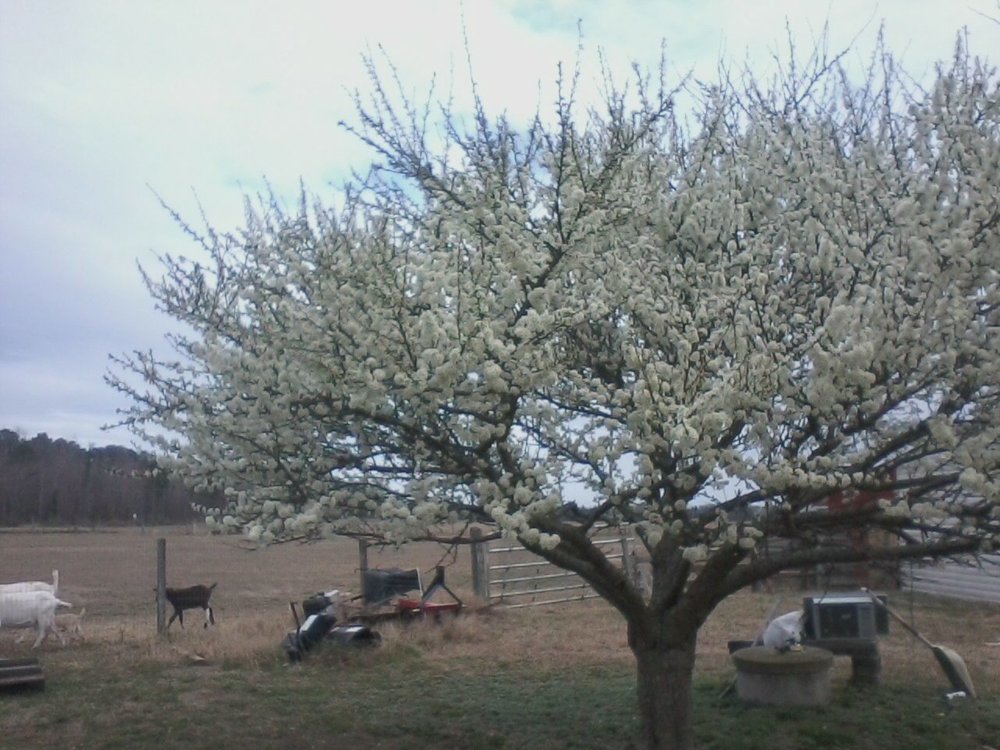 Small fruit but, sweet. I need to do more regular sprays with the organic sprays. But weather has ruined all efforts for 2016 & 2017. I have gotten a lot of fruit in previous years if I sprayed.


I have a fig, thought goats had killed when the got to it -- 15 acres & they want my little fig tree leaves

-- & I have a volunteer grape vine to move next week while I'm off. Eat grapes, spit seeds, vine grows.

Orchard knowledge would be nice.

I've been planting a few semi-dwarf trees a year. Just got fruit for the first time last year.