Ok maybe I shouldn't be posting this but I feel I really should... since last night while walking the dog I seen it again. It flew right over the house. It didn't make a sound. But this time I hurried back to the house and got my wife to come see it. Sure enough it was still there but was some distance away. We concluded it must be some kind of drone.

"I just had a massively weird experience with a erratic flying triangle something.

The lights started to flicker in my truck including my headlights and I had to pull over - this is a new problem with my truck maybe the alternator is starting to go out . When I pulled over, I noticed it in the sky flying weird and snapped this picture. 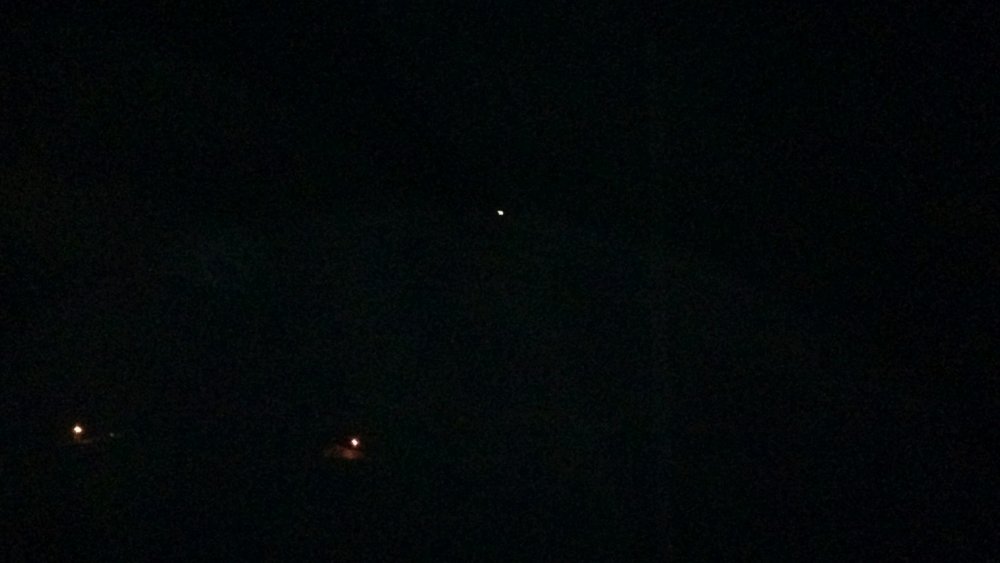 Notice the arch of whatever coming from the bottom of this weird triangle flying thing. My cell phone did not take such a good picture but it had a row of 7 white lights down each side shaped in a triangle. It zoomed off quick shortly after I snapped the picture. I've never had anything like this happen to me before - just plain werid.

Blow the picture up it's the light on the top right. Notice the visible arch coming out of it underneath it. The two lights on the bottom are from a farm in the distance. This wasn't a little flying thing either it was pretty big and I didn't notice it making any noise at all.

What you guys think some kind of drone or stealth aircraft?"

Well besides all the heckling and ET jokes... One of my son's took the cell phone picture i took and ran is through some filters and sent it back.

He said he "Brought out the exposer. Doesn't do much since the shutter speed on your phone isn't great enough to get a quality image." 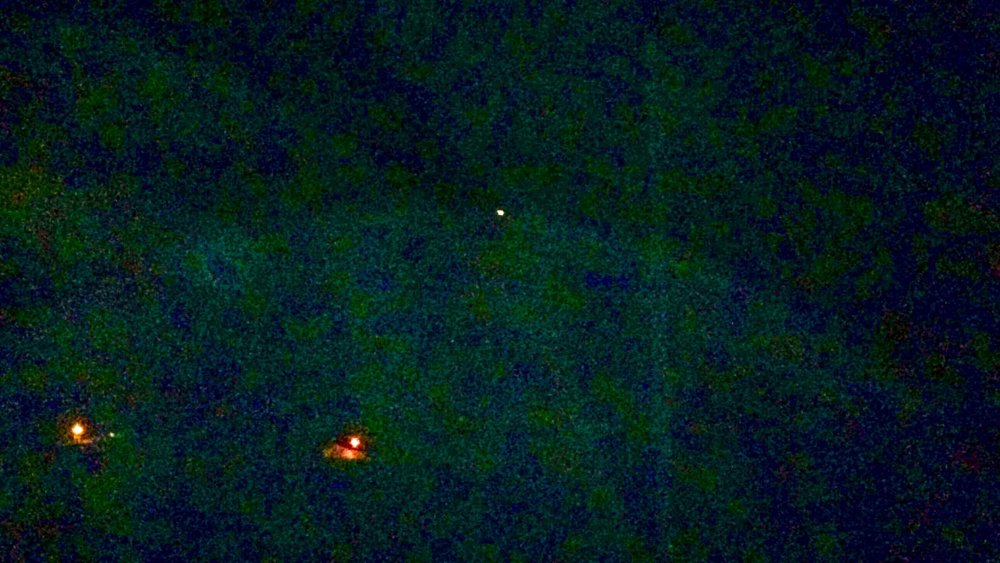 Anyways - I'm really not nutso... I seen it twice now and my wife seen it with me just last night. I don't know if I've made mention of this before... but I live in the middle of nowhere... There are no street lights and on a clear night I can actually see the milkyway. I l really like star gazing, now that I live in a place where the Stars are allowed to shine. It's really amazing how many satellites there are up there and on clear nights I can see them along with so many starts I could even begin to count. I'm getting pretty good guessing the time based on how high the little dipper is in the sky too.
M

Do I think you are nutso??

Two thoughts on the lights. One may be the ride home for the little guy we saw in the pictures you posted of your farm -- maybe? I don't know how drones look after dark. When it disappeared, how did that look?

Second, in high school my science teacher almost had a fit when I said that I felt we were certainly NOT the only living beings in the planetary system. Ok -- I also believe in ghosts and spirits returning, talking with us, etc., also psychics & mediums. Not to say "all" who claim to be are, just that there are those interpretors out there.

Now are we both nutso??

I don't know, we have a weird light we've been watching for almost 2 years. We never see it move, but it will be in one of several places depending on the night. We assume it's a drone.

They would definitely test out any new aircraft, drones etc in the middle of nowhere with less air traffic and fewer eyeballs watching so, who knows?

I'm a believer! Have seen unexplainable things too many times. Maybe we're ALLLLLL a half a bubble off! LOL!

Well, that title grabbed my attention. If anybody is nutso-count me in! Are we really so conceited to think that we are the only living beings in the entire universe? It goes on further than our puny efforts of Hubble, satellites, space rockets, space shuttle....can even see or begin to measure.

Genesis 6:4 There were giants in the earth in those days; and also after that, when the sons of God came in unto the daughters of men, and they bare children to them, the same became mighty men which were of old, men of renown.

You saw what you saw.

"And therefore as a stranger give it welcome.
There are more things in heaven and earth, Horatio,
Than are dreamt of in your philosophy."
~Shakespeare

I don't think you are nuts. We've seen many strange things up there in the night, out here where you can almost reach out and touch the stars. Some beautifully strange things.

A few years ago in South Africa we saw a strange sight in the sky one evening. Best I can describe it is a not-very-big fireball slowly moving, making a weird hissing sound as it went. My first thought when I saw it was that it's an aircraft on fire, trying to make the airport, which was about 20 miles away. As it came closer we saw it was just the "ball of fire" A friend who was with us at the time said it looked like "a hot air balloon without the balloon part" It was not very high up in the sky. To this day we have no idea what it was.
N

My husband has seen some super weird things back at his childhood farm. Lights in the sky, etc. But I don't remember them that well because I told him not to repeat those stories... They were way too creepy!! Lol

... and for some reason, I get a picture of some alien teenagers deciding to "freak the earthlings"...