So my 4th oldest son is getting married to a real sweetheart. I'm gaining a daughter, I'm so excited

Maybe it's a badge of honor or maybe not??? But here I am again, finding myself being voluntold that I and making the beer and hard cider for the reception party. Well this is not completely true... really more like asked, with big smiles, small amount of begging and hugs. But if I said no? Then I'm not sure what the out come, would be.

So the bride (my new daughter) requested 5 gallons of hard apple cider, and some homemade wines from the cellar

But here I am procrastinating, completely unfocused and not really all that interested. I haven't even ordered the ingredients yet, what the heck is wrong with me?

What started off as a relaxing personal hobby, has grown into Dad will do it up right, for special events. I used to really enjoy brewing beer and making ciders and wines. But now I just can't seem to get my mojo on. I have a lot of work ahead of me. I could really use some motivation... Or a kick in the a5s, I guess - IDK

I guess the first step is to gather up my recipes. I still haven't got what I would call a good cider from kits. It's ok and all, but you know I want it to be off the chain. It's my son's wedding after all. So I decided i'm going to have a chat with my friend at hobby homebrew. Man it's been so long since I talked to him, he might not remember my voice on the phone

Lil Red Irish Ale ingredients. This ingredient list is for version 3 and seems to be the best it out the 6 versions (tweaks) I've made so far. I do need to change the name but not the ingredients 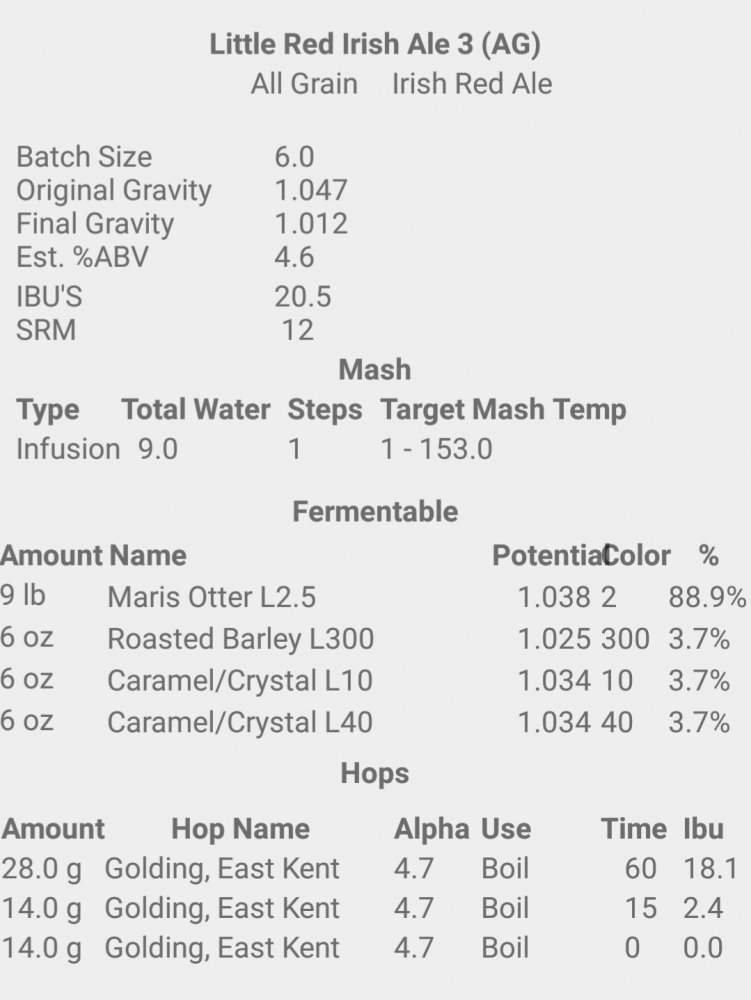 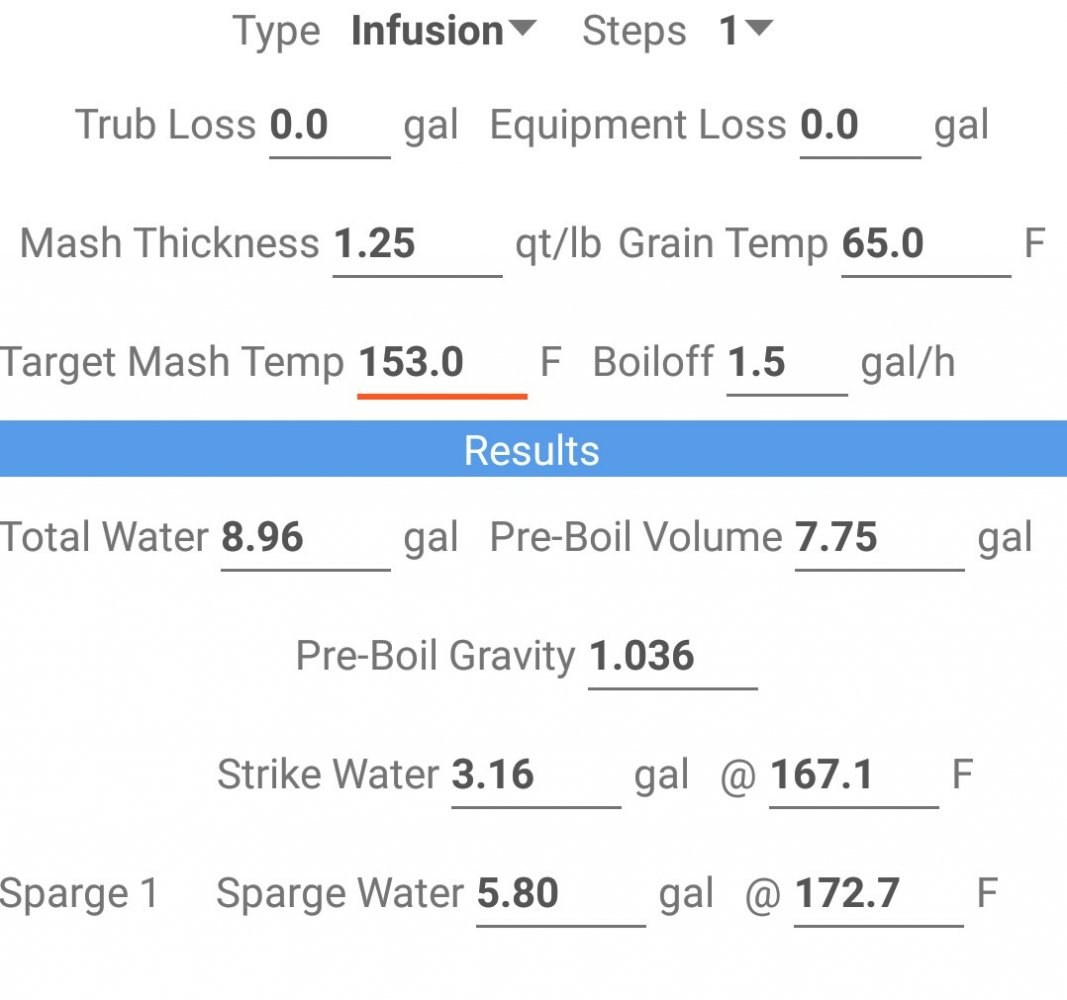 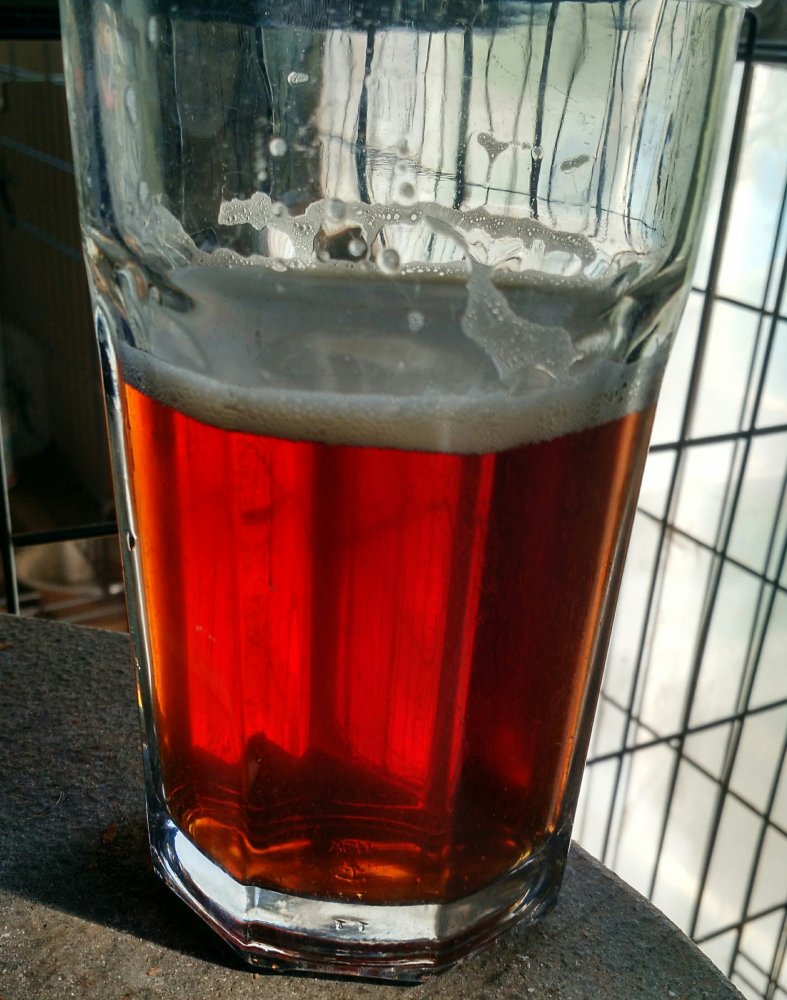 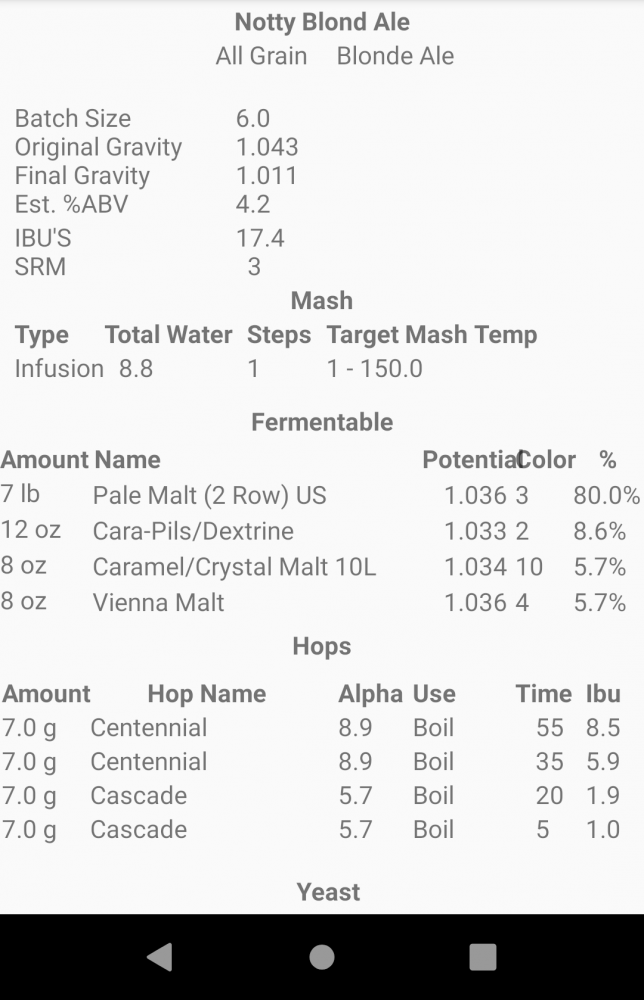 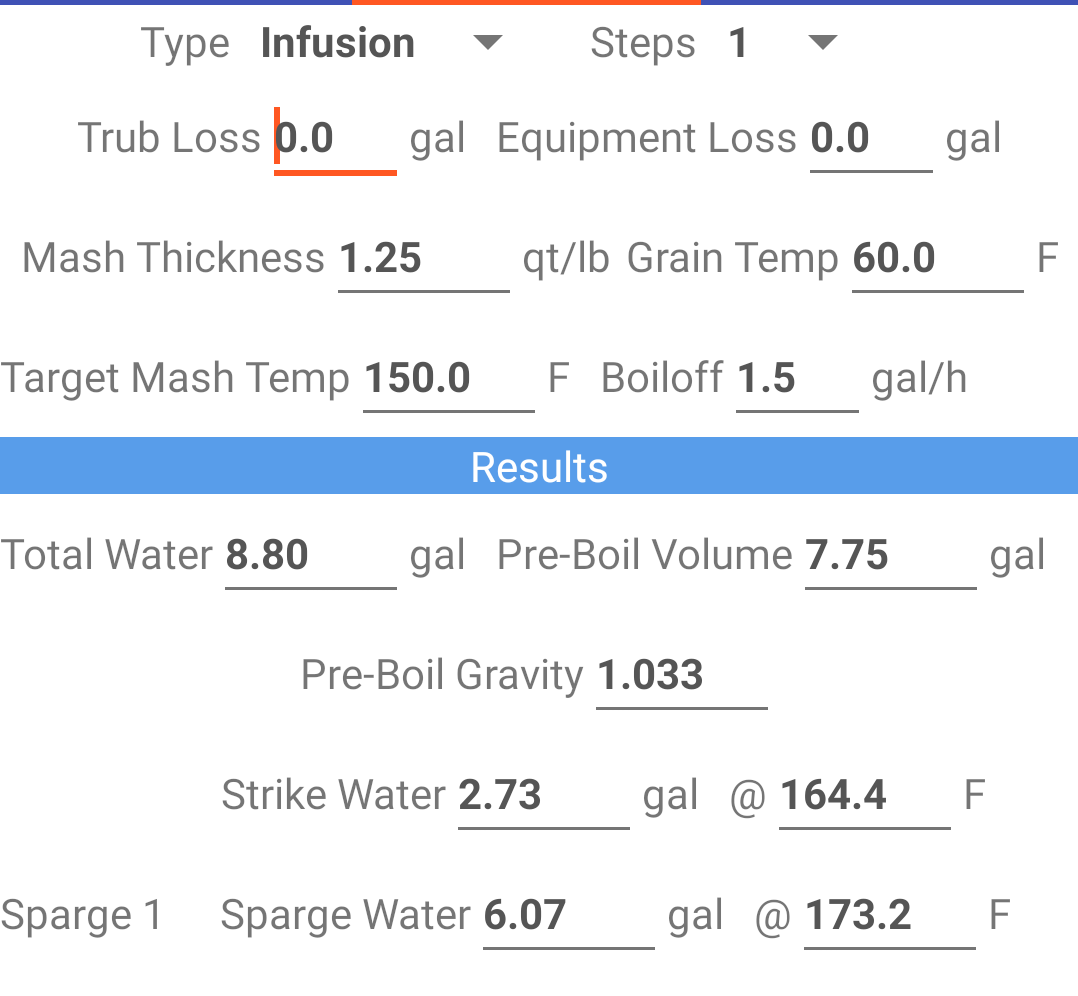 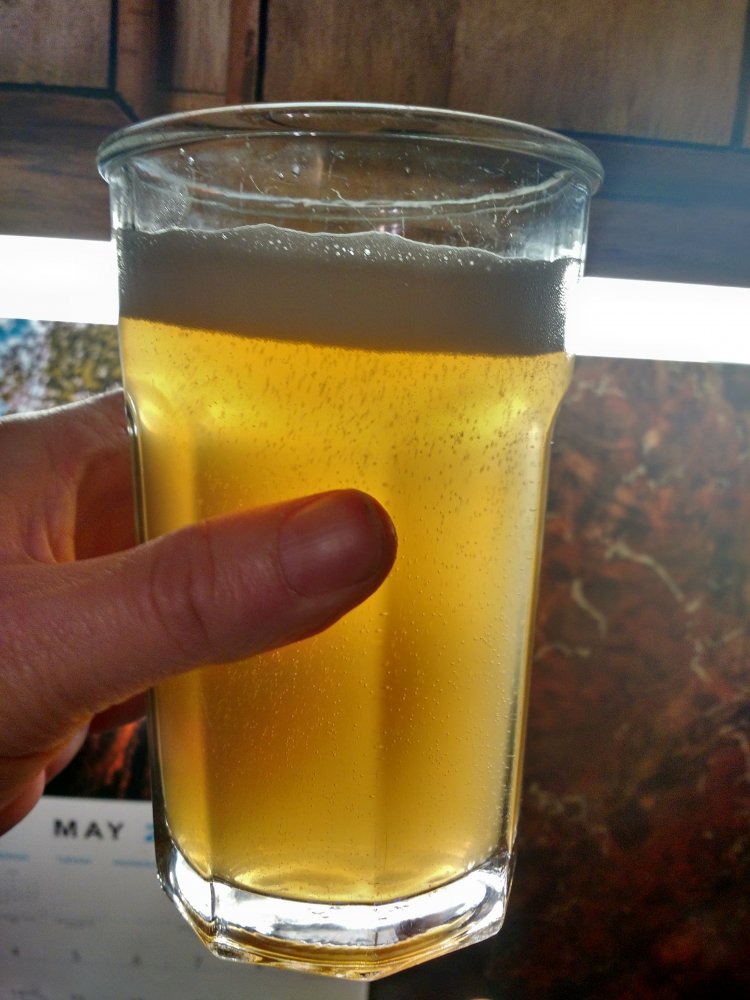 I just realized something, both beers my son asked for are fermented with Danstar Nottingham yeast. Hummmm... Now there's a head scratcher. Danstar's Nottingham yeast is one of our most popular dry yeast strains, and for good reason! It is known to be a quick fermenter, primary fermentation usually being complete in a matter of a few days. All of the characteristics of a good ale yeast are found in Nottingham: a clean flavor profile...
shop.greatfermentations.com
Last edited: Apr 3, 2021

Well I'm off to go shopping

Neil the owner of Ritebrew is a awesome guy (highly recommend). If I get my order in this evening, he'll most likely ship it Monday.

Horray order is placed \o/ I had all the hops and yeast already and some of the grains also. So I went ahead and ordered another 8 gallon fermented and a stick on thermometer for it also.

It will be nice to hear how the new place works for brewing. Do you have everything set up- shelves built, etc?

wyoDreamer said:
It will be nice to hear how the new place works for brewing. Do you have everything set up- shelves built, etc?
Click to expand...

. I have my gravity fed brew stand still. But I haven't got an exuast fan in the cave. So I'll have to brew outside or in the barn depending on the brew day weather.

I am focused now though

Called my buddy and his daughter answered the phone. She knew my voice right away. She's like one of my favorite persons. She said, we thought you ditched us

. After about 15 minutes "catch up" conversation, she totally made my day. Although her father was not around to answer my cider questions. It was totally worth the phone call.
Last edited: Apr 5, 2021 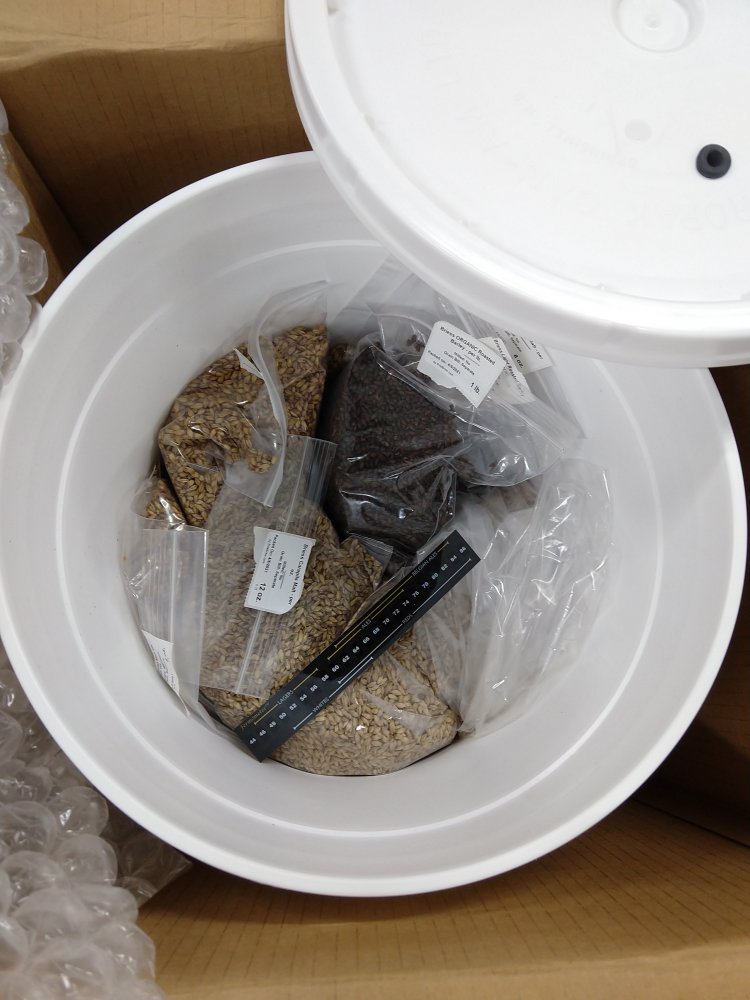 My future daughter came over today to make apple cider for the wedding. I had 6 1/2 gallons of some jacked up juice from a apple cider kit that I made and fed starting September 2019. It was Brewers Best Apple Cider House kit. I fed it table sugar until the cider yeast died of alcohol poisoning. Then I finished it off as a wine. It's been bulk aging every since in a 6 1/2 gallon glass carboy in my closet. Today was the first samples drawn.

I like to experiment and this cider wine finished off at 18% alcohol by volume, it's STRONG stuff. But after a bunch of samples mixing in apple juice we dialed it in to what we believe will be a awesome cider after I carbonate it. We tried 75% cider wine mixed with 25% Apple juice and it was still a little to strong. 50/50 was to sweet but 2/3 cider wine with 1/3 apple juice was really good. So now I have to add 2 gallons of apple juice to the 6 gallons of apple cider wine and keg 5 gallons and force carbonate with CO2 gas.

The remaining 3 gallons I'm going to bottle uncarbonated in wine bottles for them so they can drink one bottle a year on their wedding anaversary. That will be about 15 750 ml bottles, they better stay married a long time

. I'm going to have to go with the top of the line bottle corks to make it 15 years.

Even mixing with 1/3rd Apple Juice it's still a respectable 12% Alcohol By Volume. Which is like 3 times more than normal store bought bottles of apple cider. I told my future daughter I am not responsible for drunk ladies at the wedding reception.

Just for the record I asked my wife to pick up a bottle of apple juice so we could sample. I asked her just the basics I don't want a bunch of chemicals added. She said she first grabbed a bottle labeled "healthy" read the ingredients and couldn't pronounce a lot of them. Then she grabbed the Walmart brand and read the ingredients and said yep this cheap stuff is it. She did good see apple juice lable below.

The makings for a good apple cider 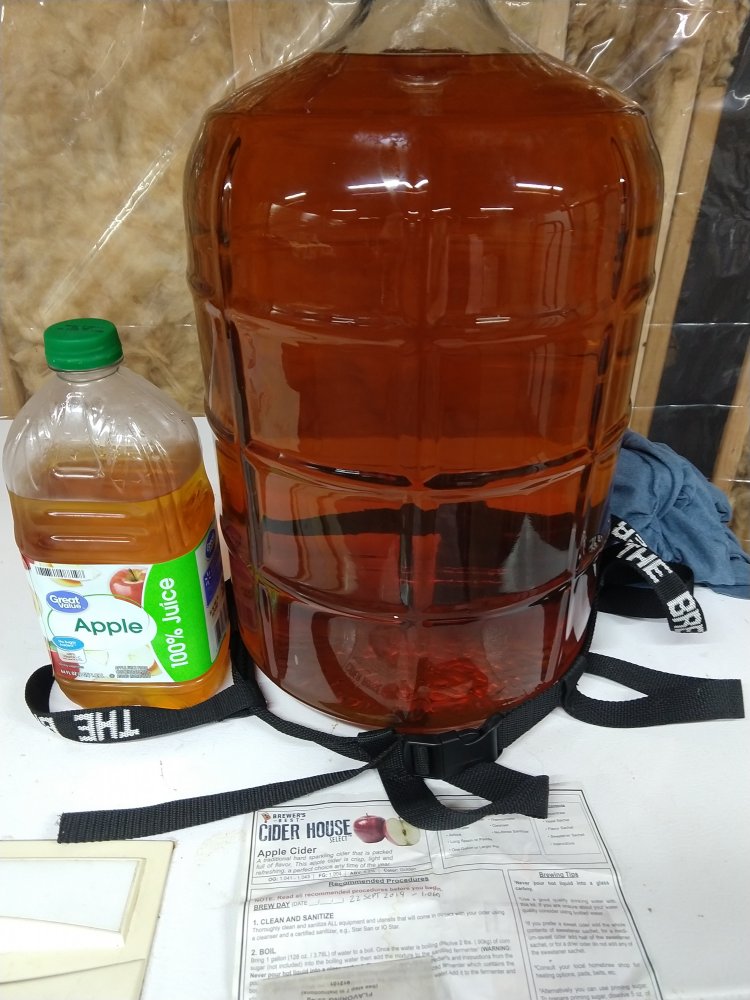 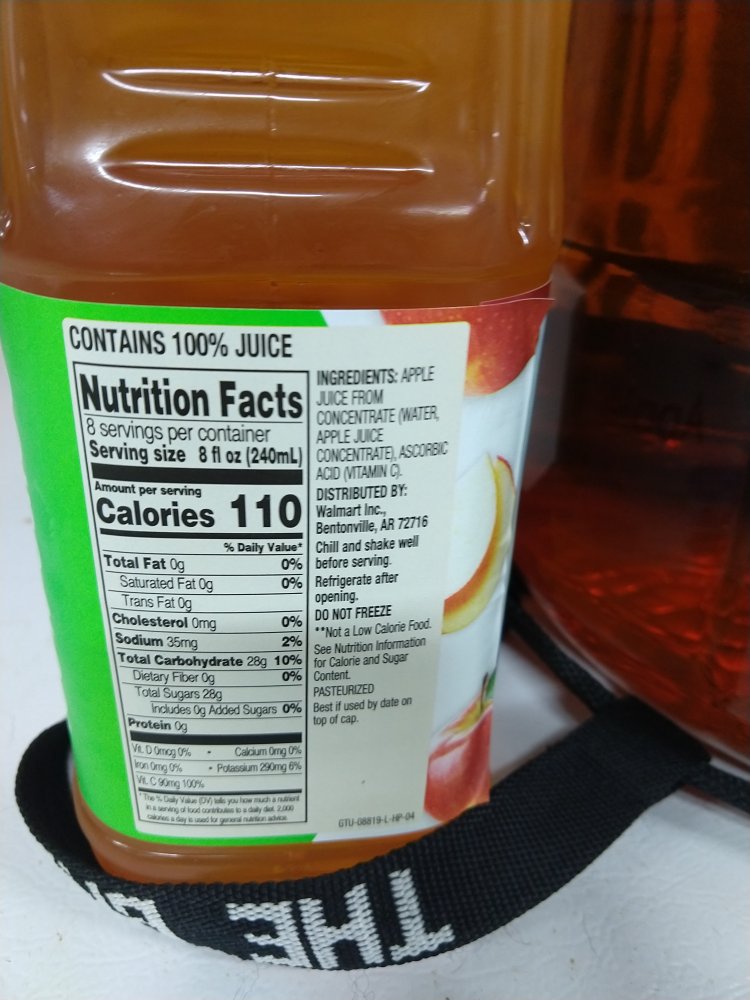 I need to name this stuff for a label. And no it can't be Crealcritter's Concoction either :

wyoDreamer said:
It will be nice to hear how the new place works for brewing. Do you have everything set up- shelves built, etc?
Click to expand...

Well we opened up the double sized garage door and brewed inside the cave. It worked very well. My granddaughters were over also with my favorite daughter in law helping my wife make strawberry jam. So it was like a win all the way around. We brewed up 12 gallons of beer, got strawberry jam, got to hang out with some of the family. But most important I got to spend time with grand daughters.

Here is one of them next to my mashtun and 20 gallon kettle. She hung right with my son and I and asked so many questions. She just might be the only 4 year old who knows how to brew beer. She even helped crank the handle on the grain mill. She always sticks to me like glue and has to help me with most everything I do, when they visit. She is so full of questions about everything and absorbs the answers like a sponge. But you know of course I don't mind the help at all. Even if it takes me three times a long. It's worth it to take time and answer everyone of her never ending questions 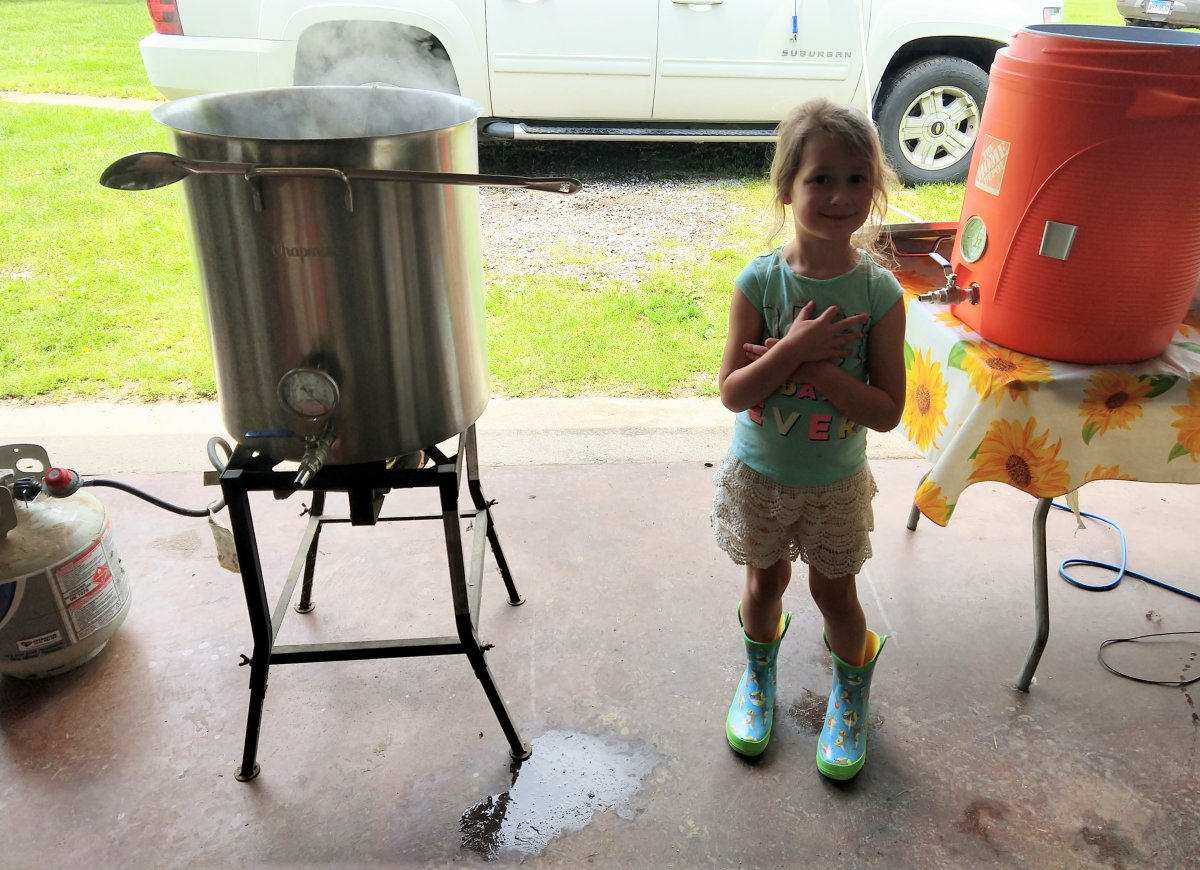 I thought your account name was Cereal Critter for the longest time...