What did you do in the garden today?

I walked it, then opened the gate & let 8 goats in! Eat all you can, so I can re-till for Fall. Raining again today. Hope to get some seed started for brassicas -- any/all Fall crops need to get in there soon.

Was so dry all burned. Now, wet enough you can't work it.

Stupid cats, have some beautiful catnip growing in the front room. Neither cat pays any attention to it even if i pick some and crush it up. I may just put the pot outside and let the feral beasts destroy it like last years planting. Lol 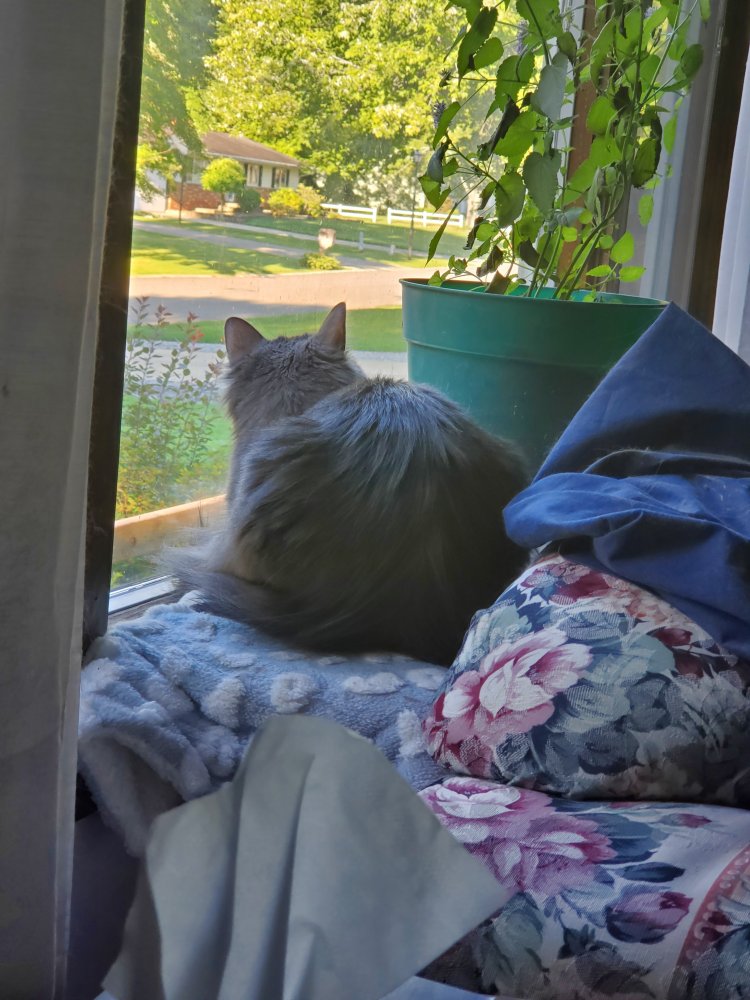 If they have constant access, they seem to ignore it. I now have catnip coming up everywhere. The cats ignore it mostly except when the buds first form. Leia will eat a few then. The chickens hate it. Bees love the stuff.
D

Its raining sideways. SO I let the ducks out and came back inside to poke the fire.

SprigOfTheLivingDead said:
I avoided the orb weaver stretched between my tomatoes
View attachment 14427
Click to expand...

We used to see those all of the time when I was a kid. I rarely see them now.
L

Your catnip may be too well watered, thus not as many oils as that grown outside in the sun, perhaps in poorer soil. Or it could be a less fragrant strain. Give them a pot of oat grass.

BarredBuff said:
We used to see those all of the time when I was a kid. I rarely see them now.
Click to expand...

I see them every year on my property and they always make me shudder.

BarredBuff said:
We used to see those all of the time when I was a kid. I rarely see them now.
Click to expand...

i've seen one here in 20-something years - would be delighted to see them again. most people freak out about spiders but i've always liked them as long as they weren't trying to bite me. we have a nice population of cellar spiders here in the house. it is impossible to get rid of them so we've reached a mutually compatible solution where i only disturb them a few times a year and they eat any other bugs they can get ahold of.

i also have some very tiny spiders that live inside some of my worm buckets. those eat the fungus gnats and some other bugs that hatch out of the soil i mix in there with the partially or fully decayed wood chips. i don't often find them outside of the worm buckets but once in a while they can escape from my when i'm feeding the worms and have the covers off... i found out recently that i can avoid that by folding the cover over and wrap it in a cloth so when i'm ready to put the cover back on i can shake all the spiders back into the bucket.

canned some tomato juice this morning. first of the season.

not much happened outside today, it was very humid and hot, i buried the tomato processing scraps and we did a quick garden tour and then came in.

yesterday i got a little weeding done and finished cleaning up a mess i'd made a few months ago. felt good to get that done at last. took me about half an hour. we'd picked cucumbers and tomatoes earlier.

The clucks and quacks got some apples today

Pulled some weeds while refilling the ducks pond. The marshmellow root is getting big. I have it under control in the main garden but its gone crazy in the boys paddock. I am trying to smother it with some carpet and keep trying to feed the boy ducks in the middle of it so they flatten it a bit. I can feel the earth warming up again and I dont want snake havens!

I planted some parsley from a pot that is big enough to go in the ground in the garden bed under the spare room window. I have a few more things to move out of pots and into beds so I can start the cycle again. I expect some light frost this week so I am hesitant to put anything in the open yet. Watered the plants on the patio and dumped the rabbit litter under the grape vine. I unloaded half a trailer of firewood but still the other half to go. Its not as neat as when I have help but at least its in a neat-ish stack haha.
You must log in or register to reply here.
Share:
Facebook Twitter Reddit Pinterest Tumblr WhatsApp Email Link