Coffee's Ready, Come and Sit on the Porch

I'm going to look at a bull tomorrow and determine if I'll take him or not. I am not taking farm babe because I already know, we would end up with him no matter what

I'm still scratching my head, trying to figure out how I got 5 head on the pasture and I'm going to look at another one tomorrow. Plus if all goes well there's two more in the oven.

Someone please tell me chicken math doesn't apply to cattle.

I think I'm going to take a week of vacation and get the second paddock finished fenced in. I have a bit of a problem though, farm babe found a "bubbling brook" in the second paddock. It's a spring, it's she's right it is bubbling and flowing pretty well right now. I'm very surprised it's not frozen but the water is warm. I don't recall it being there this summer so maybe new or doesn't flow in the summer? Farm babe wants me to dig a small pond where the spring is. I don't know about all that but it would be fun to play with a trackhoe for a couple of days. It's been a long time since I've been in one. But I suspect it's like riding a bike, it should come back to me pretty easy.

baymule said:
That is a nice looking bill. Black is a dominant color. Throw in the white banging and chances are you will get more Oreo cattle. I’ve seen this even in feral hogs. Obviously a Hampshire pig or two or three got loose because there is a herd of Oreo banded wild hogs in the Sabine River area near the town of Mineola.

That protruding block of bone is called the poll. In horned cattle, that is where the horns grow from. Cattle without horns are called polled cattle
Click to expand...

Poll is the name for the area at the top of the head, which is where the horns grow. It's termed the poll on other animals....even those who are not horned, horses for instance.

Yes, cattle can be counted as "chicken math, goat math"!

You're in trouble! But, cost less than tractors -- which you began collecting at first of move.

Yes to cow math! I think it is just called farm animal math

Cold here again today, -5 deg F this morning. Gonna be this way for another couple days before we see the 20s again (for 1 day!)

Getting stuff for the brooder ready this week. Chicks don't come til May but once spring comes the garden takes a lot of time. Also 2nd coop will need to be built as well as a bigger run.

Have a great day all

Well I just bought another beefer. He's going in band the next few days and in about a month, after he's a steer, he'll be delivered COD. He's mostly a angus bred with a little bit of brahman. I'll raise him to full size and try and get a processing date around 2 years from now. I think I'll name him porterhouse.

Another one for my wife to sweet talk too. 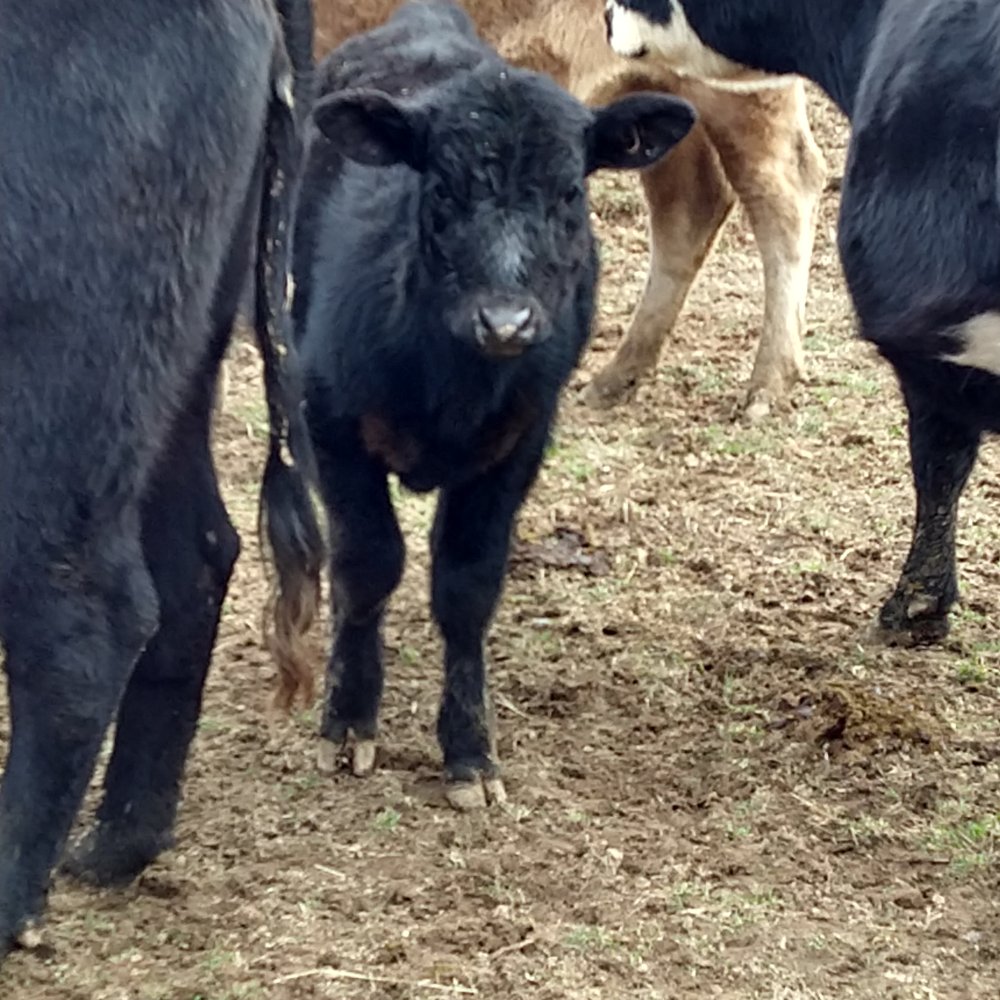 Whatever happened with the big bull that you were supposed to get for free and then band and it would be ready to eat sooner rather than later????

farmerjan said:
Whatever happened with the big bull that you were supposed to get for free and then band and it would be ready to eat sooner rather than later????
Click to expand...

farmerjan said:
Whatever happened with the big bull that you were supposed to get for free and then band and it would be ready to eat sooner rather than later????
Click to expand...

Well that big bull was BIG

like 1800 lbs big. So I picked out a little bull instead.

Edit...
That bull had a attitude, he snorted at me. Bull snort is nasty @baymule I had bull snort in my goatee and all over my glasses, good thing my mouth was closed. If I had a processing date like next week, yep I would have taken him directly to be processed.. But no way I wanted to deal with that BIG bull until next October.

I'm going to be brutally honest. Maybe brutally on my self only, but still... I haven't felt this good physically in over a decade. Per my new doctor's recommendation "let's try a prescription reset and preform a baseline in a month and go from there"

I just had my fasting blood panel this morning and have a doctor's appointment later this week. I can't believe how well I feel physically. It's funny I've been catching my self grunting when I get up from a chair. But there is no need to grunt anymore because it doesn't hurt anymore. I guess old habits die hard.

I was doing pushups last night, my wife said what are you doing? I said rebuilding my upper body strength. She said someone is feeling good

I said yep you bet I am farm babe