Personally I don't need to know the whole story, just a happy ending.

THE END would be so sweeeet!! Don't see that for at least a year.

I think you're right on timeline @Mini Horses . Vaccine production and distribution will be an enormous effort and take time. I'm thinking a year from now also. I am impatient for the Canadian border to hopefully open next year, and I really hope we have a county fair in July 2021 for 4-H kids.

On the other hand, I dont plan to be vaccinated anytime soon, so my lifestyle adaptations are long term. Its okay, this has been really good for my budget. No impulse shopping when I'm not in stores!

FarmerJamie said:
We may never ever know the whole story
Click to expand...

And if we did, it would all be a pack of lies anyway.

the most recent bonehead award goes to the boss of a relative that made them teach an in-person class last week. one person in the class was infected and spread it to the teacher (and dunno how many others). so they got sick, over the weekend their temperature spiked over 105F) and they ended up going to the hospital to get checked out. luckily all ok with lungs and heart so the docs sent them home to get over it and said they were about half way through the course it would take if it were normal.

in other news we just got an unsolicited package of stuff from Mom's health insurance company which included a ton of stuff (that she wanted to throw away or give away). i told her i wanted most of the gadgets but we are giving away the rest of the stuff we'd not use (alcohol wipes, sprays, etc.) we've already got a good supply of alcohol and cloths and so don't need to duplicate those. the gadgets include a thermometer, uv-sanitiser, oximiter and a pulse meter. i'm gonna play with the oximiter today. i doubt i'm even alive most of the time anyways so this will be a good way to confirm it.
Last edited: Nov 24, 2020

My household got what we assume to be Covid about 4 weeks ago. All of us completely lost our sense of smell and most of our ability to taste things. In all my life I have never lost my sense of taste and smell for more than a few days and only as a result of a congested nose due to headcold-type illness. After about 3 or 3 1/2 weeks, we each have begun to get our smell/taste back. I had a pretty severe 36 hour headache and VERY slight cough at the onset, and our 11 year old had the same headache a week later with no cough. Husband had headache and chills at very beginning, followed by severe unrelenting cough for 3 1/2 weeks. His coughing was continuous night and day and didn't lessen when he took otc cough suppressant. Finally The Kid and I hiked to our little stand of wild black cherry trees, harvested and peeled some small branches and twigs, and boiled it up and made THE MOST EFFECTIVE cough suppressant I have ever known.
I am sure we had Covid, as 2/3 of my co-workers had been out for 2 weeks and several of them had tested positive.

Our little county here has exploded in cases the past several weeks. 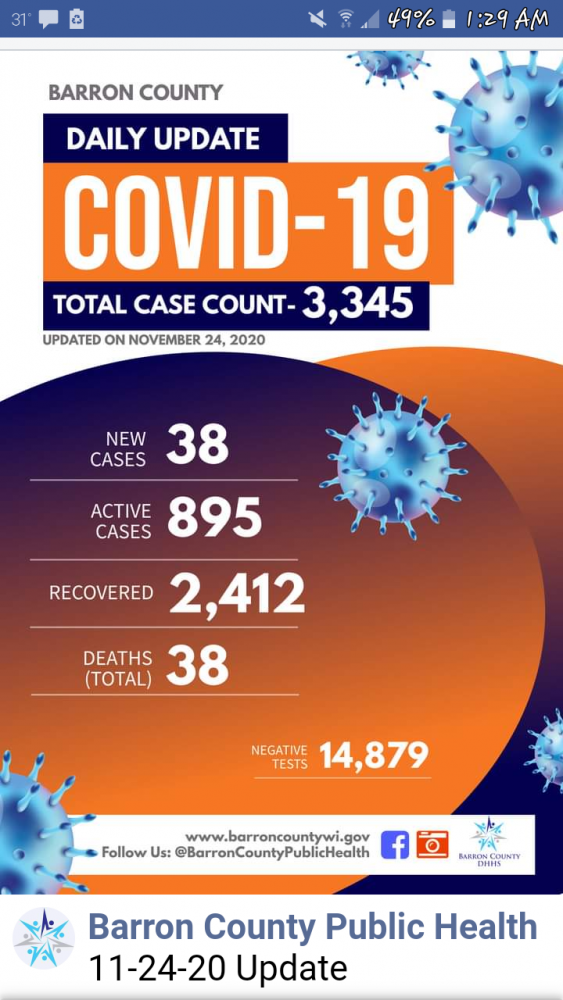 I think this needs saying. For those that think mask should be on ever bodies face.
Not everybody can wear a mask. If you put a mask on me my heart rate and blood pressure go through the roof. I can no longer work the corners when laying tile and don't try to home me into a small area because somebody is going to get hurt.
wasnt always this way but am now.

@Hardknockshomestead I like that you made your own cough syrup. I have made cough syrup from honeysuckle. We don't have black cherry here, maybe I should plant some. We pick wild elderberry every summer and I make elderberry syrup. It is anti-flu and cold, it keeps the virus from replicating. We take a couple tablespoons every morning, if we get to feeling bad, we take it 3-4 times a day.

Hardknockshomestead said:
Our little county here has exploded in cases the past several weeks.View attachment 15035
Click to expand...

I'm sorry to hear your family was affected too. How did you know to use wild cherry twigs? Can I get/buy some from you?
L

Fixit said:
I think this needs saying. For those that think mask should be on ever bodies face.
Not everybody can wear a mask. If you put a mask on me my heart rate and blood pressure go through the roof. I can no longer work the corners when laying tile and don't try to home me into a small area because somebody is going to get hurt.
wasnt always this way but am now.
Click to expand...