Mini Horses said:
Here -- deer are PLENTIFUL!!! Well fed, too. There are fields and fields of corn, peanuts, soybeans, cotton and hay all around. The farmer with the alfalfa fields joke that he "planted it for the deer". Well, there's 12-15 in there each night. They graze & go back into the woods.

Hunting is good in this area.

All the farms are no longer farmed here and they weren't those kinds of farms....mostly cattle and hay grown in these parts and now not even that. I wish we had wonderful food sources for the deer like that here! We'd have much bigger deer and more of them, which many people don't want due to deer damage to cars and home gardens, but which we wouldn't mind as that's the only red meat we ever eat here.

I am sooooo happy that you got your sheep. What a score on the pallets! Wow! You are, as always, resourceful and find fabulous bargains. Those sheep will have a good life with you.

Sheep sneaked into the shed and knocked over two different feed buckets, getting the lids off and gorging on sweet feed and also some deer pellets. The next morning they had some bad bellyaches and Rose was rather sore on her back feet.

Gave her some baking soda and water in a bolus and gave them free choice baking soda...which they never touched.

Both seem to be doing better as of yesterday evening, though poops still look a little soft and green.

Got a feed can they can't knock over nor get the lid off of, and only time will tell how this will effect them. Both are back to nibbling graze and Rose, the one in worse shape, was even back in the shed looking for more stolen goodies.

Glad they are better this morning, Bee. (She had time to give an update on her forum.)

My dad raised sheep for years. They can be incorrigible. One day, he got tired of chasing them down a 4 lane highway. Sold the whole lot of them before the week was out. Interestingly, about a month later, he was offered and accepted a transfer from southern ME to central ME. Making the move with horses, dog, cat was hard enough. Would have been much harder with a flock of sheep! Without that move, he'd not have ended up building his own business, and I never would have met my hubby. I love the way God works all things to HIS purpose!
M

Yeah, those parts of WV are too hilly for a lot of crops. At least the smaller areas of "flat & tillable" are not profitable. But, cattle, sheep, goats, & pigs can do ok.

I know goats spend their days making us crazy, guess sheep do too! Glad they are improving. Goats have been proven to be great "problem solvers" to get into where they want and we don't want them. They also have awesome retention of the way to do it!! Always felt sheep were less apt to be trouble.

Wish you could get some of these deer around here. Any early morn or dusk you can see them in actual herds...not all that spooky either. 12-20 in a group not unusual. Generally there are large quotas so hunters can help thin them out. As to damage, so many crops around that the farmers are all "sharing" and not excessive loss to one due to that BUT -- backyard gardeners aren't so happy. Deer like variety in their diet

We also have large numbers of wild turkey in my area.

I have two lambs that are grazing on my grass every day. Not pleased, can't wait until market day!

Sheep, like horses will eat themselves to death. They are always starving and will beg shamelessly for more feed. LOL I'm glad yours survived!

The sheep are back to normal now, nice pellets coming out the south end and only grass and loose minerals in the other. Will be building feed pans into/onto the milking stanchions soon and will use a little feed for training in those the rest of the year...but just a little.

Will add alfalfa pellets to that feed before breeding season, but not much...right now it's a mix of sweet feed, oats, and BOSS. A little alfalfa will round that right out.

Got a sulfur block this weekend...read a lot about the pros and cons of it, so will report any results~good or bad~I notice.

Here's a little blurb about using kelp for sheep...that's my loose minerals for the sheep, sea kelp and coarse salt mix. Used it for my last sheep and milk cow and it seemed to work well. Didn't see worms expelled like they describe here but it seemed to keep them healthy and fat.

Interesting. Possible that your sheep did not have the same worm loads as there's, not that the kelp didn't "work" as it did for them.

I feed my goats oats, BOSS, steamed flaked barley, alf pellets & hay...milking goats get, pasture ornaments less of some. Kidding time, the anti is raised. Like all, adjustments are needed and done. And pasture availability changes with seasons. A good grass hay is used, little alf added or in the mix already, for winter and rainy days.

I collected 14 rotten round bales last month to roll out in areas where I would like to have better grass. The farm I got them from had GREAT hay fields and these bales have plenty of seed.

Last year I had spread some hay out on some barren soil in the shade, up by the dog run, just trying to cover the mud there so I could walk across to carry water and such. This spring I had a lovely and tall patch of ladino growing there! The wheels started turning....I had already bought ladino seed and a lot of lime and fertilizer for one area I wanted to turn into pasture, mostly moss there now. Planted all that seed and limed it good to kill the moss....got an initial growth of clover that was smothered by some weed that's taking over this land and all others. Not sure what it is or what it's called.

So, figured, why buy seed when hay bales have a ton of it and I can go get some free mulch hay and spread on these mossy areas instead. The hay can work as a mulch layer to kill what is underneath and also fertilizer for the hay seed already in the bale. Seed I didn't have to buy.

Haven't gotten a chance to spread those bales yet, though some rolled out a little when I dropped them in various places on the land. Here's a pic of what's already growing around those bales and through the layers that fell off the bales when dropped. What's fun is that the chickens are spreading the hay that is rolled out, so I don't have to.

I call that a win/win situation...didn't have to till, buy seed, lime, or fertilizer and didn't have to work too hard to spread the hay. Just need to get those bales rolled out or they will be too rotten to roll at all. Found they also make a nice scratching post for the sheep...who are also spreading the hay each time they scratch against a bale.

See that moss growing in the background? That's all over this meadow in various places...we have very little good grass and some areas of good clover, but not nearly enough and all of that clover was due to me buying seed over the years and frost seeding it. 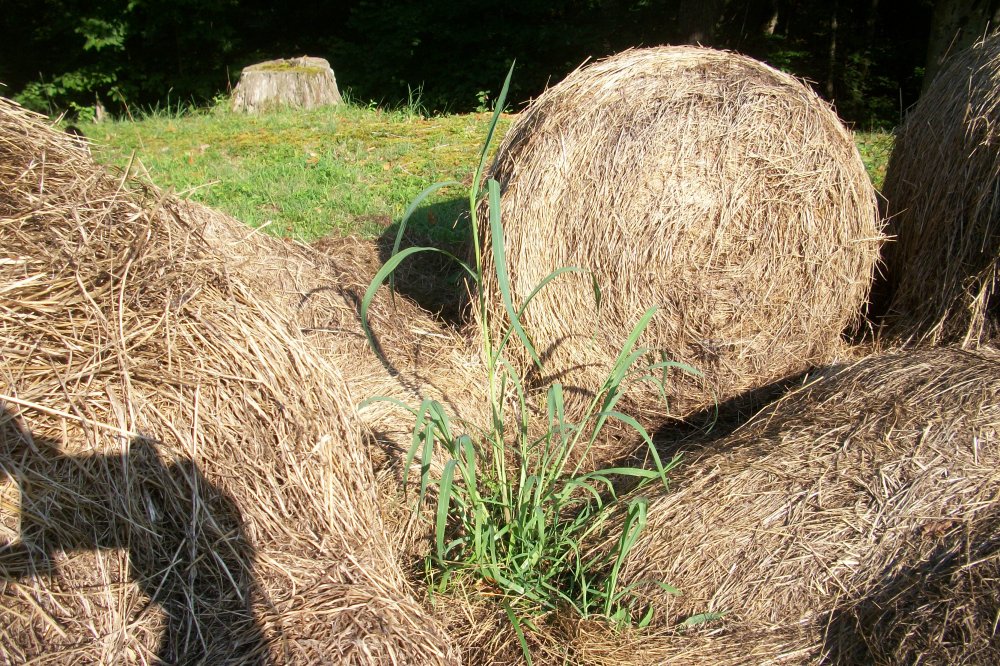