baymule said:
@Chic Rustler if you have two, they will still roam. Put up a good fence and keep your dogs at home. It will also keep other dogs out. Then hope they don't dig under or jump over!
Click to expand...

I know, but they would roam together. Safety in numbers .

It may take months or years, but counter conditioning can be done. Just don't rush it. The sooner you start, the better your chances.

I like that idea @ Tortoise. I remember watching a Dog Whisperer episode where he rehabilitated a military dog. That was the saddest episode - watching a dog who had been such a brave and valiant dog....but he was able to be rehabilitated. It took a long time, and a lot of work - but he came out of it.

My pup just turned a year old and I was really hoping he would be a great vermin killer like my first dog, Gunnar, was. Guy is being influenced by my older dog Biscuit who has no interest in hunting and will only chase and catch something that is round and fuzzy and green. Or flat. Tennis balls and frisbees.

We got our chance this week when a mouse got trapped in a 6 gallon pail. My plan was to leave it there for a day and let it get weaker and then bring it out in the yard and tip it out for Guy to catch. My husband came home from work while I was still working and thankfully he got the same idea when he saw the mouse. By the time I got home Guy's prey drive was fully developed. He's been catching and killing flies in the house with great enthusiasm now (he just barked at them previously) and he's determined to catch that chipmunk that races across the yard every day.

Gracie saved the day again! Only a slight exaggeration lol. Heard her barking on the back porch in a weird, high pitched "come and see what's going on" type of bark. DH went out, in sandals and Gracie was barking towards the chiminea. DH had a broom and poked under there and out comes a snake! I came out barefooted and grabbed the broom and flicked the snake off the porch. Gracie was chasing it - Cowboy was standing there with a "what?" look on his face, lol. I tried to pin it down to see if it was a copperhead or a chicken snake. I'm still not sure and I'm pretty good at ID'ing snakes...but it was moving too fast - Gracie was in the way - Cowboy FINALLY got in on the action and the snake hauled butt outta there, lol.

Excitement on da farm! Sure wish I had been able to catch it though cuz I'm fairly sure it'll turn up again and I'd like to know what I'm dealing with. Especially since it headed for the garage, which is DH's domain, and sometimes he's less than observant. A snake bite on a lower extremity of a severe diabetic could be life and/or limb threatening. Just hope Gracie keeps her eyes open and warns us again if it's hanging around!
N

Stella woke me up one night basically jumping on me and so on. Got up and looked out the window she kept running to that overlooked the goats pen and there was something wrong. All goats but the herd queen at the time were in their shelter and she was at full alert. I got a flashlight and boots on and went out with Stella. She ran down and circled the pen and barn without a peep marking all around it and then stopped between fence and wood line and stared with her hair on end and tail flagged. No noises. Once she felt things were ok she turned around and bumped noses with the goat and she headed back to the shelter as Stella marked one more time and then followed me up to the house again.

It' amazing what they can detect with their super senses!

Loving all these stories of great dogs!

Someone was shooting off a .22 this morning and I could see Ben start to get anxious up there, but what really surprised me was the female cat, Miss Molly...she was on the porch railing getting some loving, but when she heard that gun shot the ears went back, a low growl started in her throat and she turned to face the direction of the shooting. I think her kittens have her in high protection mode.

Dog #1. Paris, our female Great Pyrenees. She was a free 11 month old chicken killer. her previous owners must have punished her hard because she blamed the chickens and HATED them. She rushed the coop snarling and growling at them when she thought I wasn't around. But I could see her through the kitchen window. It took TWO YEARS to undo the damage done to her, but she finally became the finest chicken protector ever! Until February of 2015, she lived in our small backyard. Now we have 8 acres.

This was the first time I let the hens out and she did nothing! This was such a triumph, I was so proud of her. This picture was taken 3-4-2013. 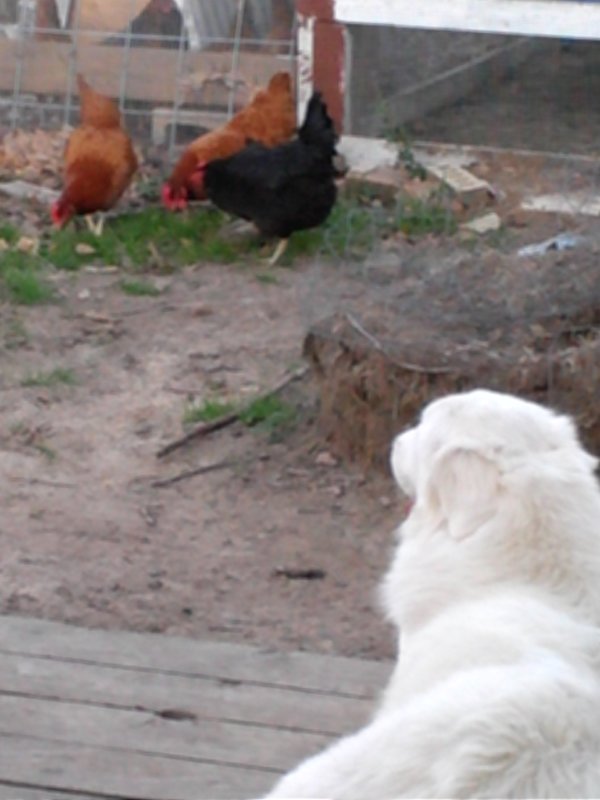 This picture was taken 3-26-2013. In a few short weeks from her debut as a chicken guard, she had her own pullet entourage following her around! 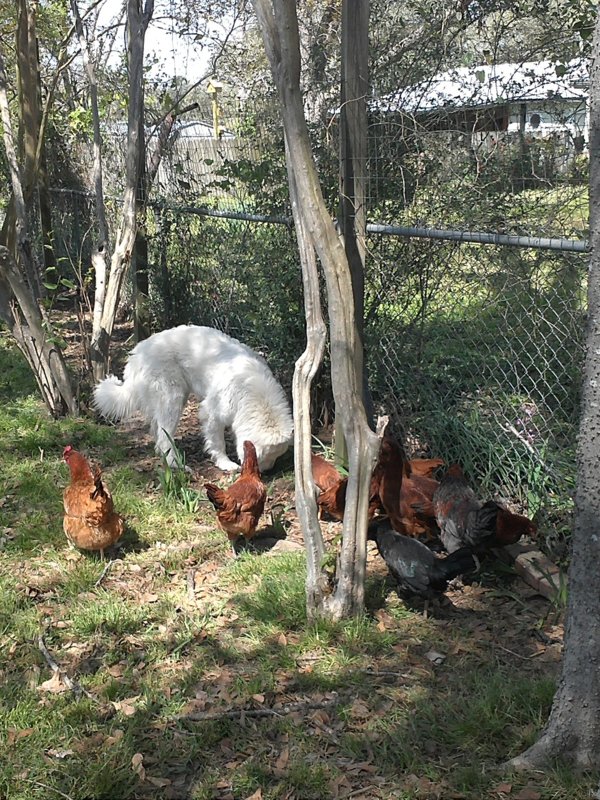 From chicken killer to letting the shameless hens steal bites of her food. 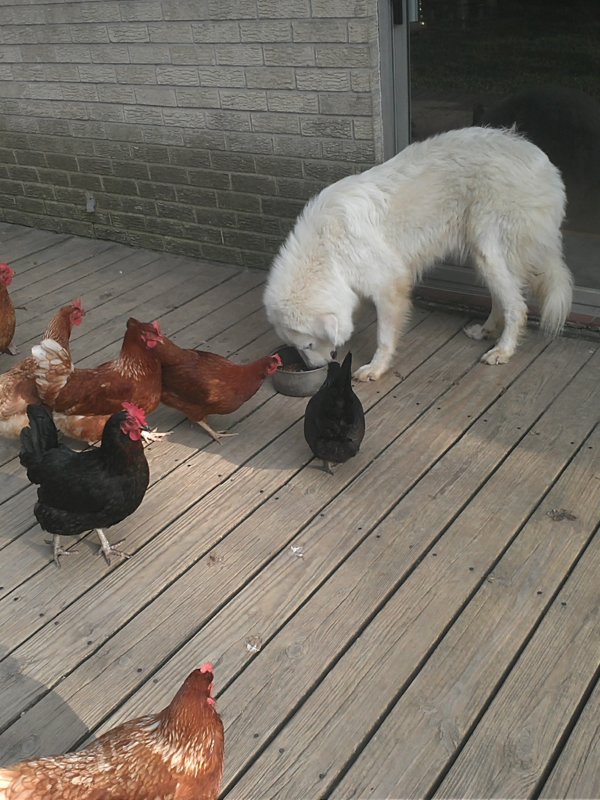 My Mom had a stroke and wound up living with us. Paris adored her. Mom would push her walker out on the deck and pet Paris. Paris would stand on her hind legs right in front of Mom, one flick of her paw would have knocked Mom flat, but Paris never touched her.
This picture was taken 11-11-2012. 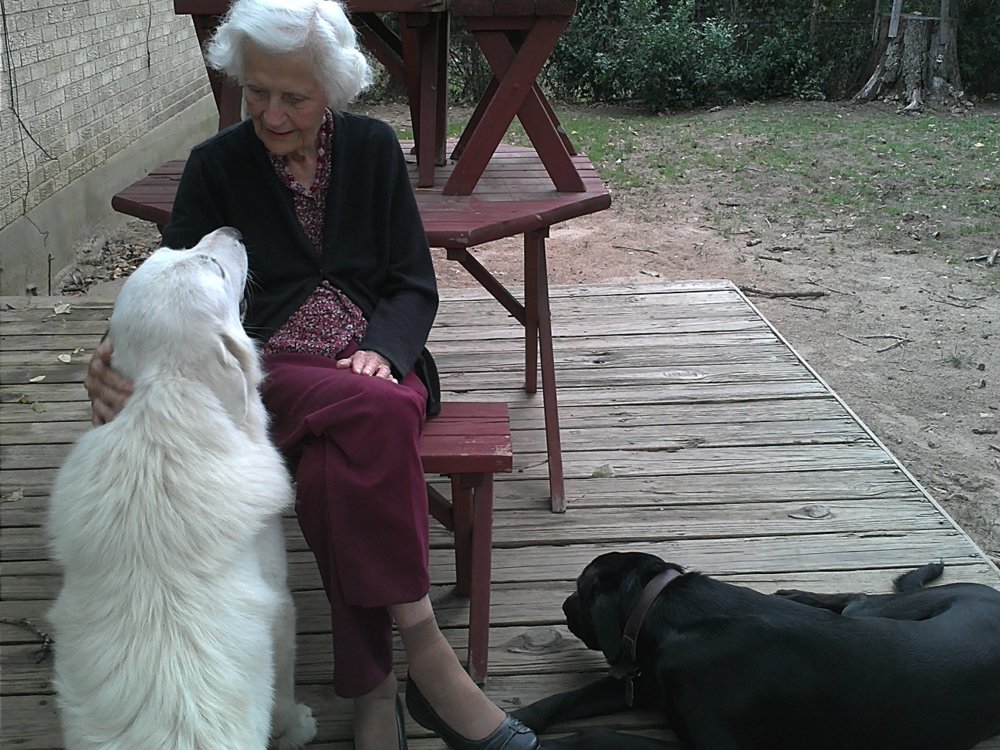 We bought a doublewide on 8 acres, sight unseen, on a HUD repo bid. We closed in September of 2014, but didn't move until February 14, 2015--our 19th anniversary. I was gone for days at a time, painting the house and putting down flooring. In this picture, taken in October 2014, Paris was staring through the glass doors, wanting me to come out and play with her, which I did. This shows our small back yard. Paris was Queen of her yard and defended it against neighbors, loud trucks, motorcycles, falling acorns, other neighborhood dogs, feral cats that the cat hoarder next door fed, and she barked. A lot. All day. All night. We built her a back yard before we moved as she didn't get along with our Australian Shepherd. 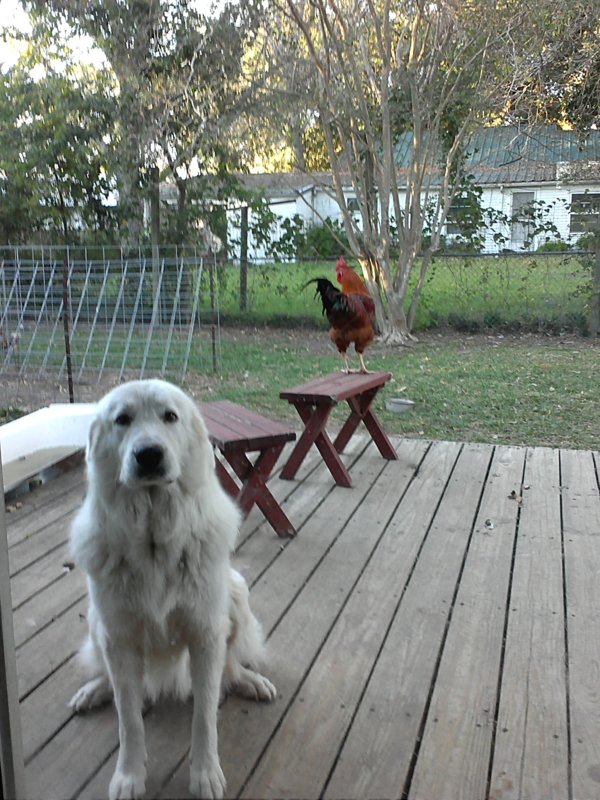