You did a great job with Paris - she has come full circle!

Paris. Part two. We moved February 14, 2015. We had to leave Trip, Paris and the chickens as we just didn't have room. It was a fast move. We closed on our old house on February 11 and was moving out 3 days later. We went back a day later to get Paris, Trip and the chickens. Paris was in for culture shock. When she got in her new yard, there were horse monsters in the pasture that shared a fence with her! She chased them up and down the fence, barking for months.

Her first night in her new home, a really dumb cat jumped the fence to eat her food and she killed it. She was really proud of herself! We were worried that she had killed somebody's beloved pet. Later we found out that it was a feral cat and a neighborhood nuisance. We were so relieved!

Paris was happy in her new home. At our old house, we were 1 block off a 4 lane highway, right in the middle of town, so something was always going on. People walked down the street at 3 AM, the high school foot ball field was across the highway from us, a tire store was across the street from us, traffic, noise, all of them things she felt she needed to protect us from. Now, there were new things to protect us from. Deer. Possums. Falling acorns. Horses. Coyotes. Cows across the road. Squirrels. She barked. A lot. All day. All night.
Finally she settled down and quit barking so much. She seldom barks now. When she does, there is something out there.

This one got away. It was in the horse pasture and she could only bark a frenzy on her side of the fence. 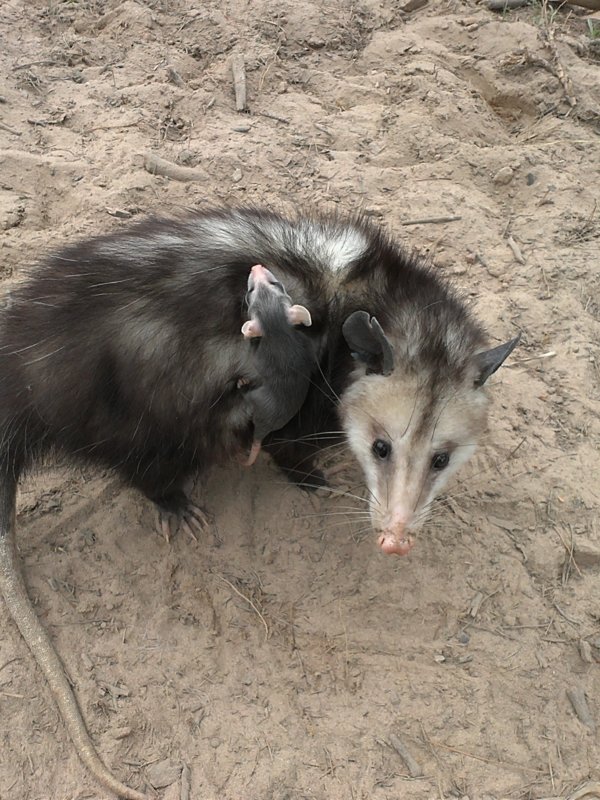 Then we got sheep. She thought she had to protect me from them and bulldozed them. I walked her on a leash in their pen. 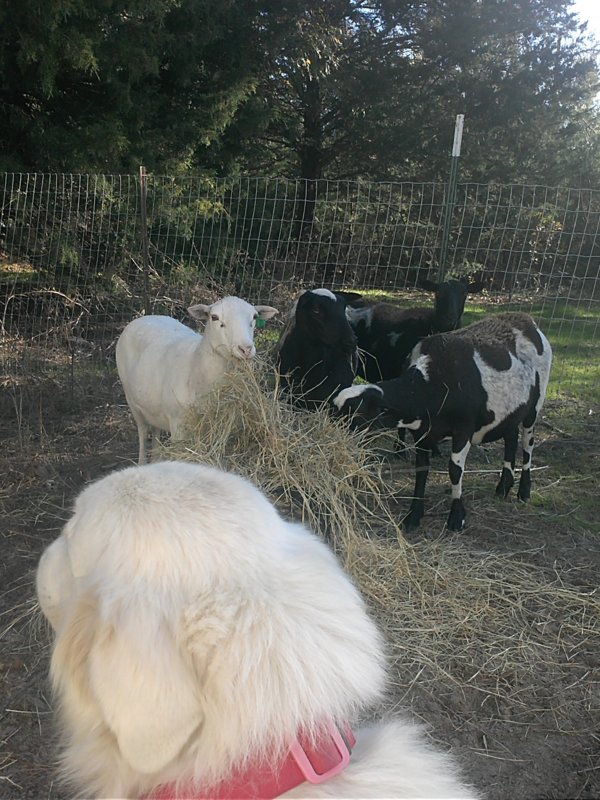 When I let her off the leash, she tackled them again. I was afraid of coyotes wiping them out, so I put her in the pasture outside of their pen. Nope. She climbed out and was trying to get back in HER yard.
Total fail. I had to put her back in her yard and think on how to get her sheep friendly. I had to put Paris on the back burner for awhile.

The ewes lambed and as they got to weaning age, I had a brain fart. If I put the lambs in her space, by default, they would become "hers" and she would protect them. But first, they would have to be protected from HER! So we dragged the Hawg Hut in the back yard. (The pigs had gone to freezer camp) We built a pen in Paris' yard and put the lambs in it. 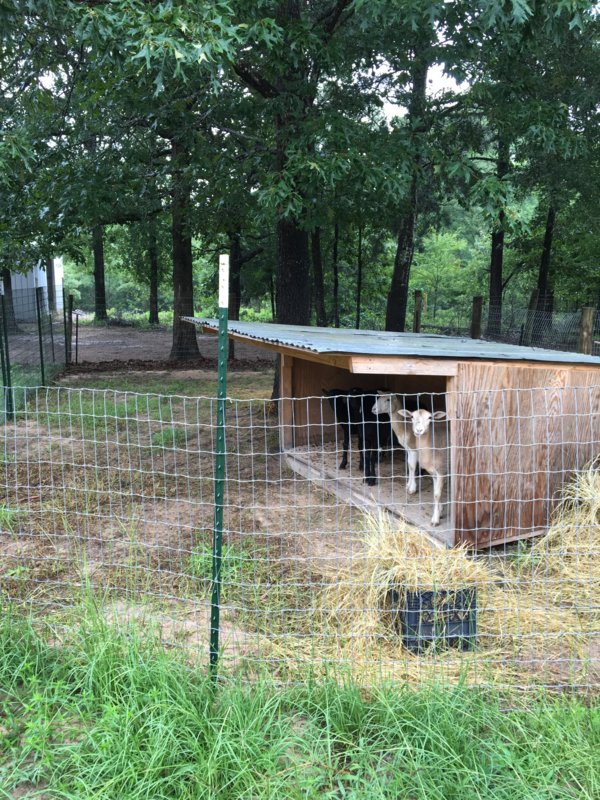 We gave her a few weeks to get used to them, then let them out. I snapped a leash on her and we walked around. She sniffed them, and got lots of praise and hugs. I put the lambs back in their pen. Each day, we worked with Paris. Finally I was able to just let them out of their pen and she guarded them. 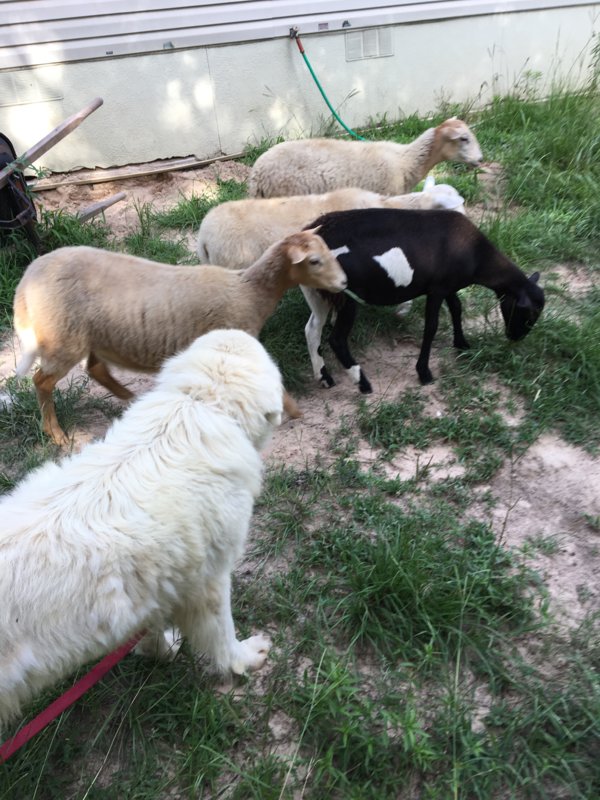 The ewes started lambing again in November 2016. Paris was there with them. She was respectful, stayed out of the way, but was right there guarding her ewes and new lambs. 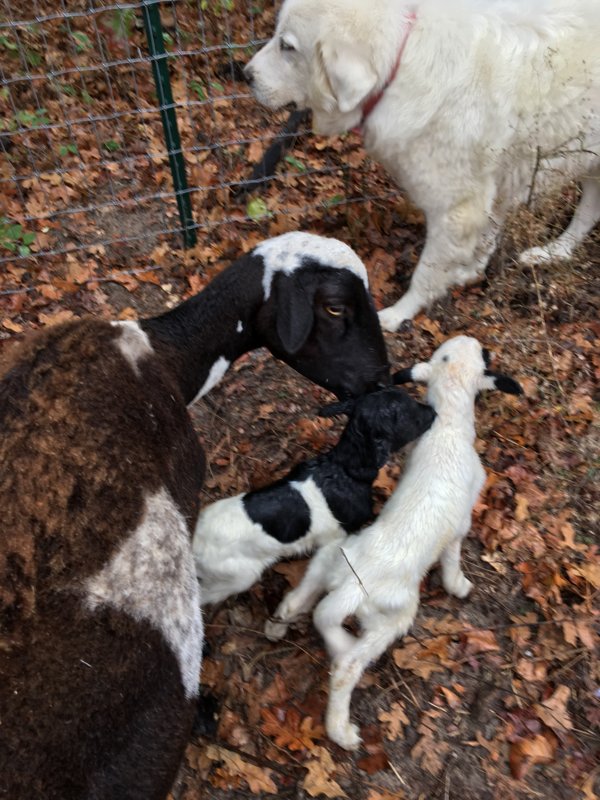 Paris went from an unwanted chicken killer to a backyard chicken guard. She made the move to the country and became a sheep guardian. There were lots of bumps and lumps along the way, but Paris is an integral part of our farm and we can't imagine it without her watchful eye on things.

This one didn't get away. 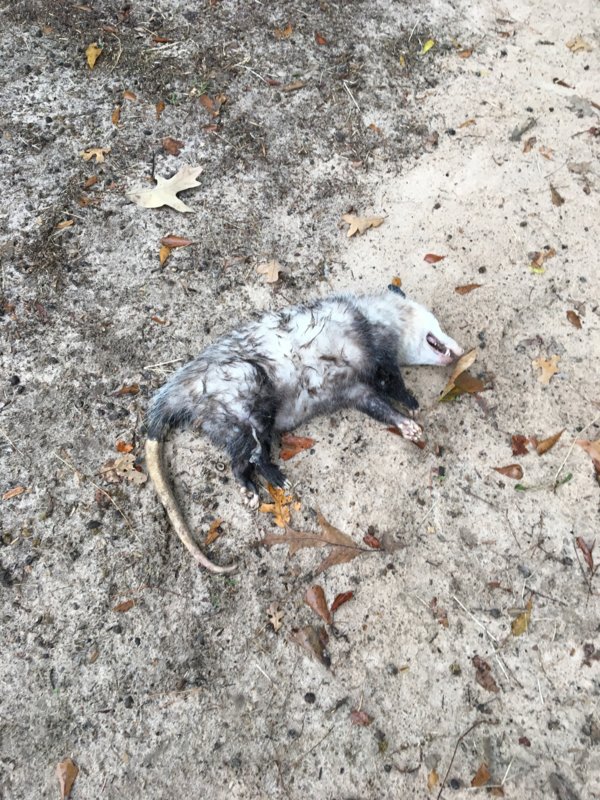 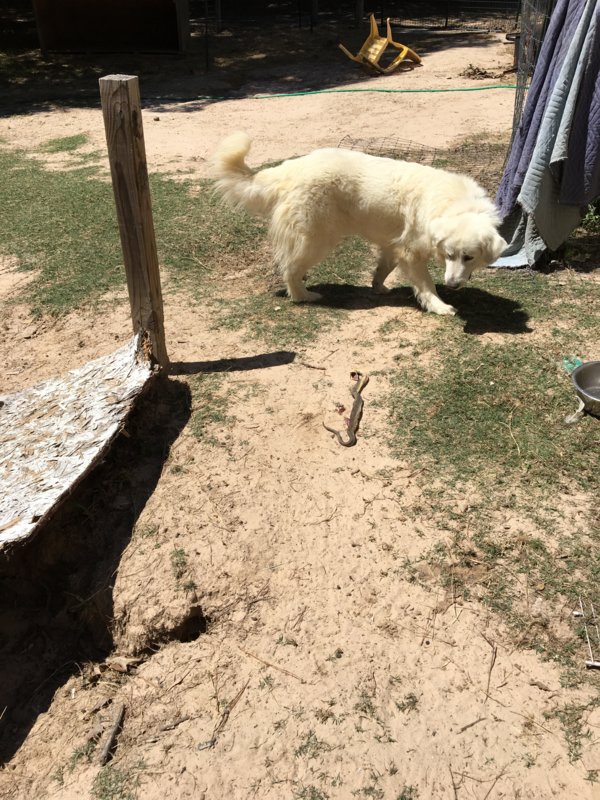 Stalking a copperhead. She was barking like mad so I went to investigate. DH killed the copperhead, but she killed it again and again. LOL 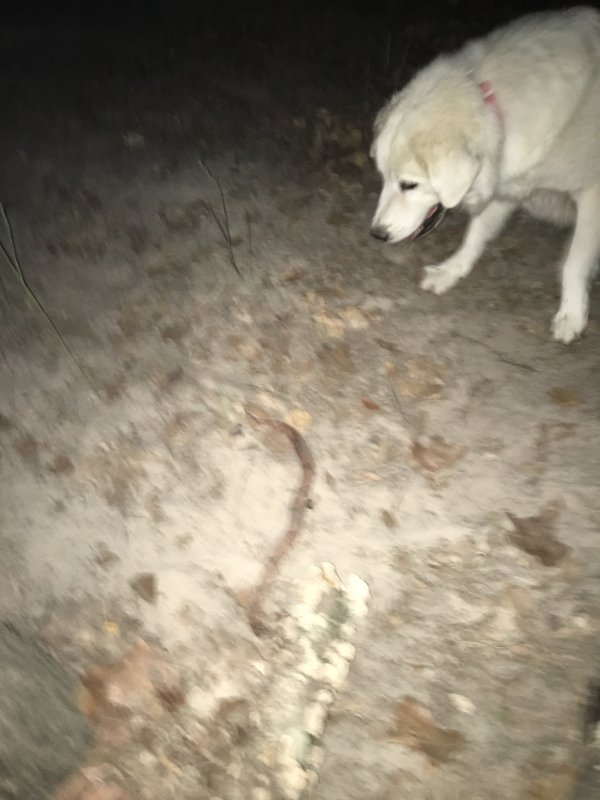 What a good girl!

Paris has come so far!

As I was struggling to build this massive, heavy structure for this stupid dog to crawl under when it rains or when he wants to be extra cool, or to climb on top if he wants a higher view of the terrain while he's on his run line, I got this thought....what in the world am I doing this for????? A dog. No, a dog so I can have chickens.

Used up the last of my reserve pallet wood, worked all day on it, it looks like ever livin' lovin' crapola, and I got jumped on by a gigantore wolf spidey.

Anyhoo...it's as finished as it's going to get right now and I bet you any amount of money he won't even use it.

Oh my goodness! I can say that I think I know how you feel. When Cowboy was jumping fence several times a day and I kept adding more fence - I felt like I was chasing my tail... silly dog. But.... we do what we do cuz it's what seems right at the time...and cuz we kinda like them "dumb dogs!"

And no picture of your "dumb dog" palace????

baymule said:
And no picture of your "dumb dog" palace????

Oh, no...it's not really pic worthy, Bay. Just scrapped together out of different pallets and not a level or cut right piece on the whole thing. The best I can say about it is that it will serve the purpose until winter, when I'll have to add some more wood to make it more weatherproof.