I no sooner posted about the chick zipping when I walked back in and found it had hatched! Here he/she is! 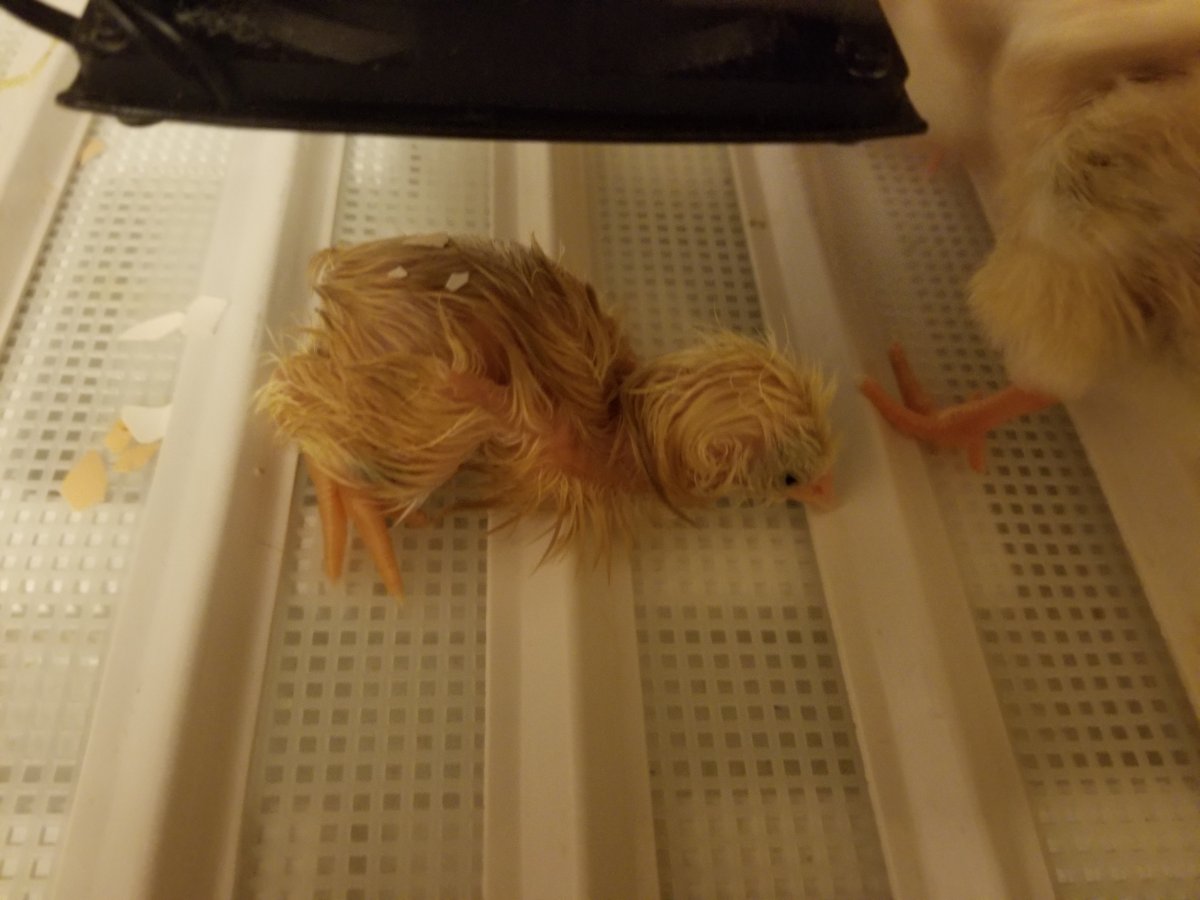 Just came in from doing the rabbits nails and nobody is happy with me.

Most of them needed it to some degree but a couple just needed a few on each foot.
Getting ahold of them by the scruff is challenging on a few. They hunch thier neck down when I grab them there. The male Californian runs laps around the cage as Im trying to grab him. He left a big ol' scratch on my hand the other day when I was transferring him to the stackables.

He and Sumi havent had thier nails done for 3 months so they were overdue. The nails werent too bad, tho.
Poor Buckaroo Bonzai got the worst of it.

Once his nails were done I combed out some more matts and yellow hair.

His back end is the worst. He is slowly getting less yellow and turning white again. He was a little stressed out once I got done.

I feel bad about that.

His little ears were all red. Hope I didnt hurt him. I laid him on his sides as I combed him and tried to be as gentle as possible.
All the rabbits in the barn have a fan on them so I hope it helps.

Once I was done I gave everybody a treat of loose timothy hay. I hope they forgive me.

They got over it.

This morning I replaced some wire on one side of Belle's hutch. Yesterday when I was trimming her nails I noticed a large sore area with no hair on it on her shoulder. First thought was the rats tried to hurt her but the realized it was where she was rubbing up against the spot I had cut the wire trying to put a J feeder there. The feeder was pushed out a little so Im not sure if she was attempting an escape or it was from her trying to eat.
I didnt put the feeder in right so it wasnt letting the pellets flow down. I had cut the wire high and was using that to rest the bottom on instead of lower using the wood frame as support. Oops.
So niw she has wire that is 1 x 1 inch and allows for a no cut J feeder to hang there.
Live and learn.
Last edited: Aug 25, 2020
M

Rabbits are as much trouble as my goats.

The last chick hatched out this morning. The egg was white so I know the mom is one of the Production Blacks. Wont know who the daddy is til it feathers out some.
One of the chicks that hatched out about a week ago was found dead in the brooder Sat morning. Not sure what happened but there was blood on the shavings I noticed after I took it out. It was one of the bigger ones so its odd what might of happened. It was kind of flattened too so not sure if it got trampled or something got ahold of it.
Cleaned all the buns cages Sunday. One female likes to pee right in the front corner by the door. Nasty. Also bleached out some water bottles that were getting algae in them.
Rabbits inside got thier pans cleaned and fresh shavings this morning. Does anyone know how to get dried on pee off metal pans? Ive got some wire brushes and was told vinegar will dissolve it but it doesnt seem to work very well.