I've been thinking about making a tarp from feed bags, but what would I use it for???

Love the garden row cover idea!! Thank you for sharing!

tortoise said:
I've been thinking about making a tarp from feed bags, but what would I use it for???

Love the garden row cover idea!! Thank you for sharing!
Click to expand...

Make your tarp and if a tree falls on your house, you will have a tarp to cover the hole and keep rain out of your house!

feel free to ask me all about standing in the rain, in line at Lowes, waiting to get inside and buy tarps! Haha

Seriously, those tarps wear out rather quickly, but maybe make a raincoat? LOL

Here is a picture from my old house. I used feed bags and newspapers to help keep the weeds down. 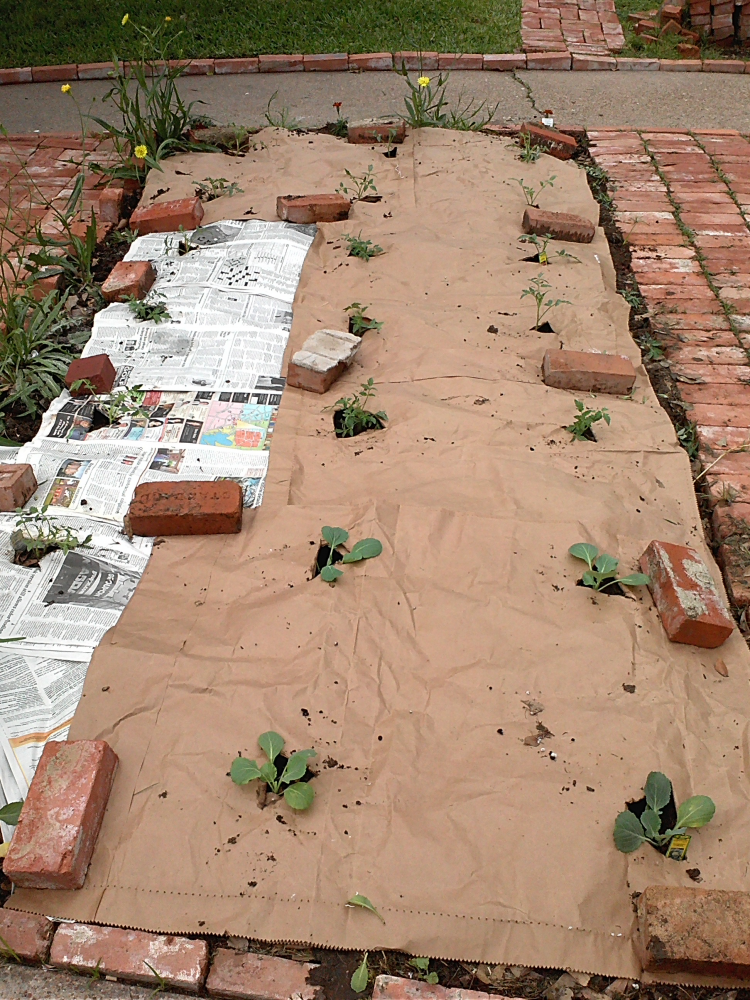 I have seen people cut the nylon feed bags open and sew them together to use as wind/rain breaks for chicken runs. They tried to keep it less redneck looking by having the white face out.

One of the better uses, that I might actually copy, was someone used them as a house wrap on their new chicken coop. Then they covered it with shakes. The roof did get bought underlayment before they shingled it.

one thing that is irking me about a lot of the crafting projects you see on-line that involve plastics is that it then turns that plastic into something that will be harder or impossible to recycle later.

also, any plastic left outside will eventually decay and start breaking apart, even those that have UV stableizers in them can eventually have issues unless it is protected by something else.

around here with the extreme cold of winters any plastics can get really brittle and shatter.

but then even glass or rock has that kind of problem when they weather and get water in cracks, etc. but at least when they weather they aren't things i have to pick up and dispose of, they can be left where they are.

wood, wood chips, cardboard, cardstock, craft paper and paper are still my favorite materials (in that order), they all eventually get broken down by worms and the other soil community creatures and turned into humus. plastics have been nothing but headaches unless i can toss them in the recycling bin.

we do have uses for plastic containers inside and for food stuff, but in my own uses i try to only keep certain ones and get the rest into the recycle bin because i don't have enough room here to store them all. it's bad enough i'm collecting what i do and i can pare things down here now that i'm getting my room cleaned and reorganised again now that bean sorting and drying has finished up (i still need to work on the beans more but that happens during the rest of the winter).

I agree 100% about upcycling plastic. Better for me to put it in my trash which gets incinerated than to upcycle and it gets bumped down the line and ends up.... where?

My bamboo/castor oil toothbrushes and toothpaste tabs arrived today! I'm so happy to be able to buy them. They are more expensive. I think its worth it. When it goes mainstream the cost will come down.

Ok - shame on DH - but he put the trash out before I got to sort it. (ya'll know I really didn't want to sort it - yuck!) We started that bag on Monday morning. It's a regular tall kitchen can that holds a 13 gallon trash bag. It was only about 3/4 filled over 3 days and that wasn't even smushed down.

I know my two biggest problems are paper plates and paper towels. I don't use paper plates very often and we don't use them for eating off of every day. What I generally use them for is messy/greasy stuff. We have a septic system and grease build-up would be the kiss of death so I'm totally adamant about not washing dirty greasy plates and letting the grease get into the system. I won't even wash a dirty skillet until I use paper towels to wipe up all the grease. There was a plastic pull-top off of a carton of cream that was tossed but that was all the plastic. No glass, no aluminum and no recyclable plastic gets tossed - it gets hauled to the recycle center. Food scraps to critters...junk mail used as a fire starter.

Paper towels are probably my biggest challenge. I wash my hands a LOT and I hate the idea of using a cloth towel over and over. I think that's icky. I don't even keep hand towels in my bathrooms. I use paper towels there also.

That's my trash story - and I'm sticking to it!

Mom assigns everyone their own hand towel in the bathroom. They get used one day. That came about in the bad old days of kids with pinkeye

When I am canning or doing a lot of cooking, I use up darn near every dish towel I have, and that's a drawer full. I also use a paper towel to wipe out skillets to keep the grease out of the septic, so don't feel so bad FEM.

Speaking of grease in the pipes, I found my husband pouring grease down the sink one time and fussed at him about it. His answer? "It's ok because I run hot water down the sink after that."

My answer? "Well don't 'cha think that all that hot water will might, just maybe COOL OFF between here and the septic tank and clog up the pipes?"

frustratedearthmother said:
Paper towels are probably my biggest challenge. I wash my hands a LOT and I hate the idea of using a cloth towel over and over. I think that's icky. I don't even keep hand towels in my bathrooms. I use paper towels there also.

That's my trash story - and I'm sticking to it!
Click to expand...

I have the same mentality there!

I use a cloth hand towel in the bathroom, but I always use paper towels in the kitchen before I prepare food or to wipe up grease and stuff like that. I go through a lot of them too but figure I cant be perfect at everything! And when I can, I do chuck them in compost heap.

I use antibacterial wipes frequently too, and those dont compost as well, so usually they will go in the bin. BUT only after being used at least twice - like we dont have garbage disposals in the sink here, so I will use the wipe for what I want and then pile them next to the sink to use to clear the sink strainers before they go in the bin.


baymule said:
Speaking of grease in the pipes, I found my husband pouring grease down the sink one time and fussed at him about it.
Click to expand...

I found a house guest stuffing leftover sausages down my kitchen sink one day!! I was furious. Like WHY would someone do that?!? I had to use that draino poison stuff a fair few times after that to try and move the blockages. Luckily I am on mains water but the pipes in the house are really old! Its his wedding at the end of the month and I really am debating if I bother going. I'd not have anything to do with him at all if he wasnt getting married to my long time friend. Seems to be a trend with me, if I dont like the dude, my mates end up marrying them. Idiots.
You must log in or register to reply here.
Share:
Facebook Twitter Reddit Pinterest Tumblr WhatsApp Email Share Link