Did you take pics of the "before" Bee?

sumi said:
Did you take pics of the "before" Bee?
Click to expand...

A few but it's very hard to get good pics because the bathroom is so squeezy little. Still working on the redo...need to buy shelving boards and a board to frame out the new mirror~got at GW for $2.50.

Opted to construct a new towel bar from pipe and flanges...got a 48 in. towel rod for less than it cost to have a much smaller, much more cheaply constructed one. Painted it with auto body primer and then some semi gloss latex that matched the paint I painted the bathroom vanity.

I'll be putting up shelves on the opposite wall and painting them the same color as the blue wall. This painting was done as a wash, with a mix of 1c. paint to 3 c. water...and it only took 2 c. of this mix to cover that wall and the board trim around the shower. I still have two c. of the wash to use on the shelves and the frame around the mirror.

Here's a few pics of the befores and afters....the camera doesn't show the true color of the paint as it's a cheapy camera. The paint is a little more bluey-green color than this...

This is with the old tub taken out...it was a sort of harvest gold color but we couldn't get one of the same color to replace, so had to use a white one. Got a chance to clean up 25 yrs of crud that was under this tub, replace insulation that had gotten wet, put in shut off valves to all water lines and replace spigots. 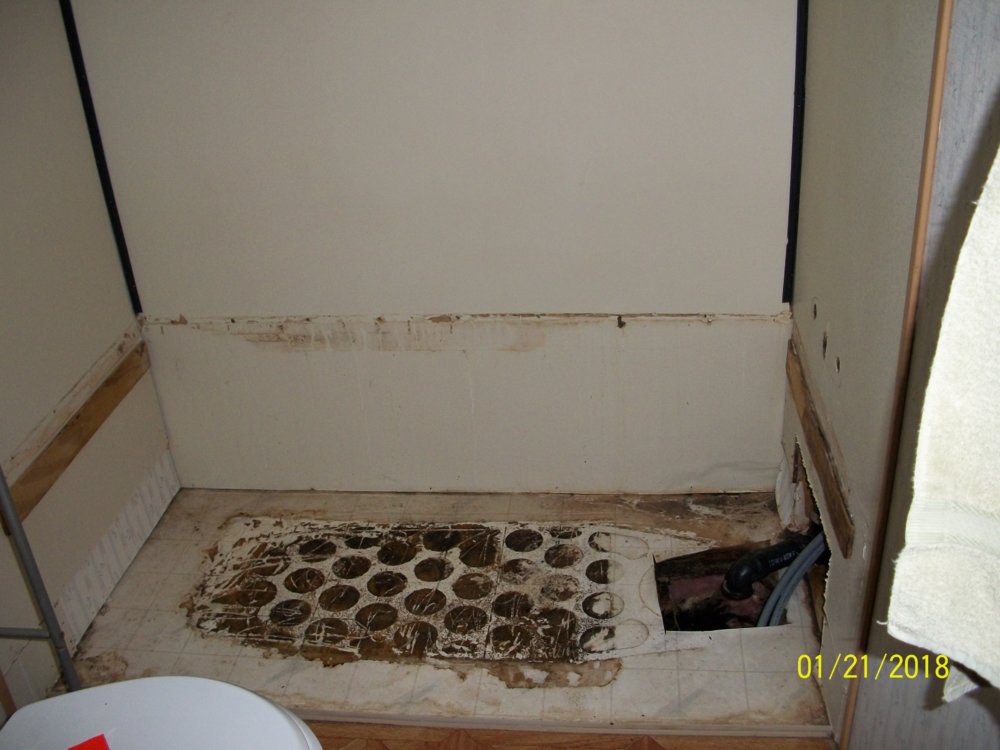 New tub...was very hard to get into that space and the wall on the right got very gouged. It's just printed panel board, so patching it was an option, then painting it...but painting these things is a bear. They are plastic coated, so they take primer and many, many layer of paint to cover and even then you can see the print showing through. We opted to place panel bead over that wall, put in horizontally rather than vertically. I wanted it to look like an old cottage exterior wall. I had wanted to do it all in shiplap but MUCH too expensive. 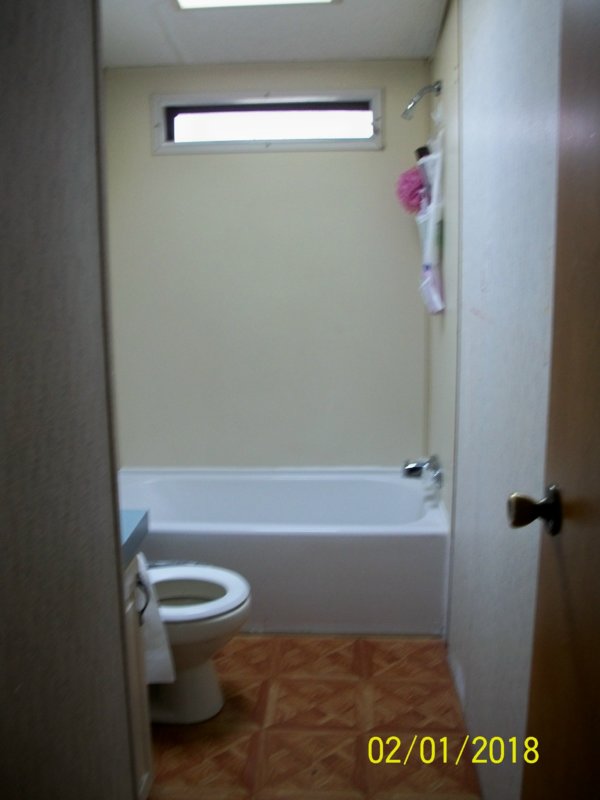 Water damage and gouges in the old wall....Mom had caulked over the gouges temporarily but you can see them all the same. 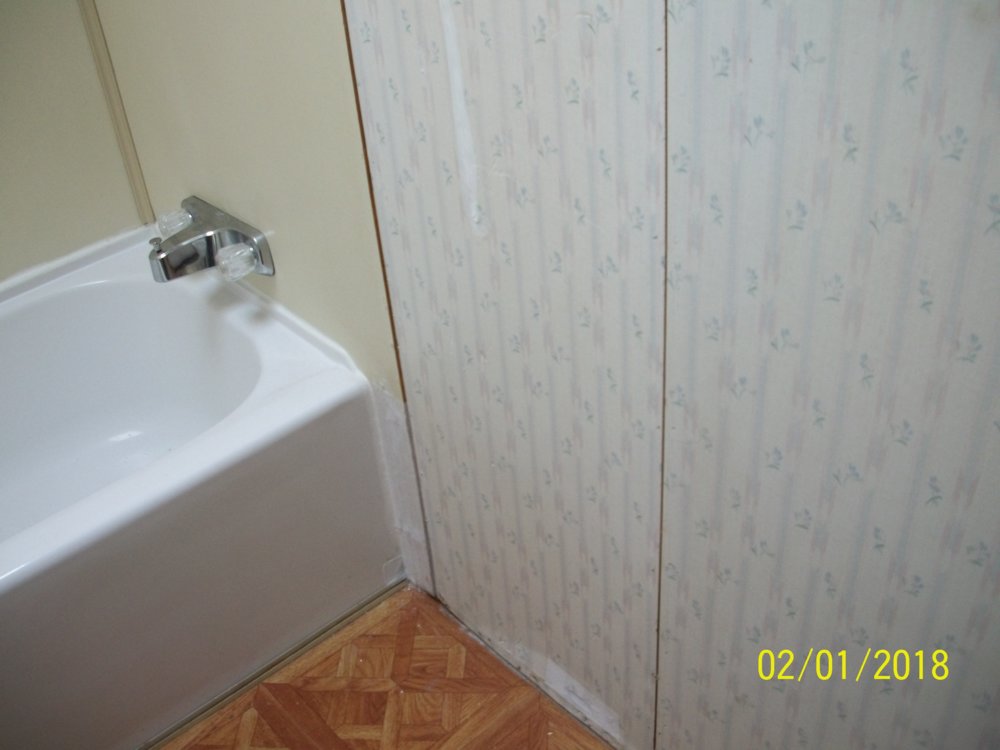 Panel bead up and board trim placed around the shower....hadn't been sanded yet. 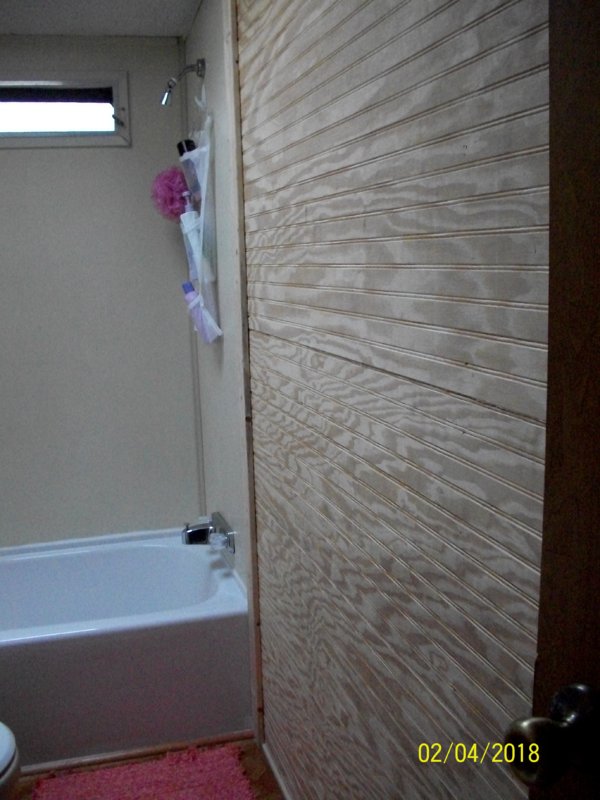 One coat of the wash...which is all it's going to get. I wanted the wood grain to show through on this. 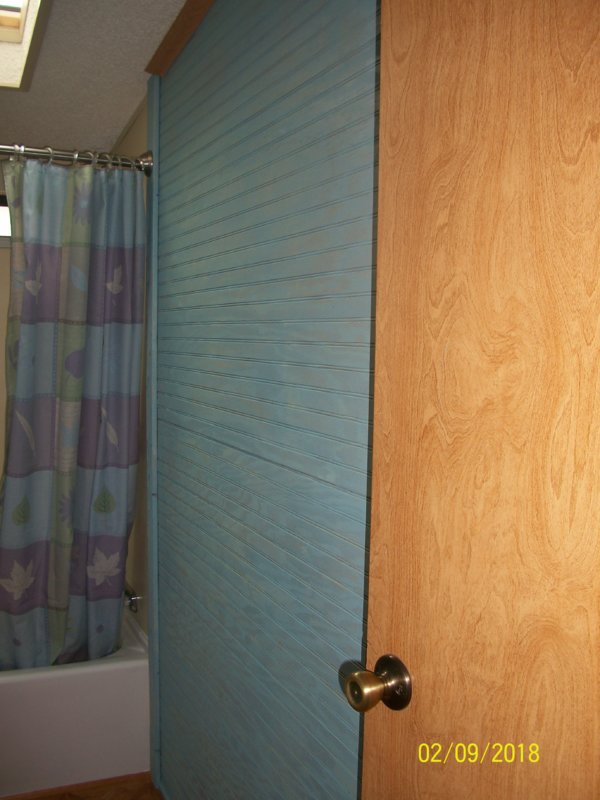 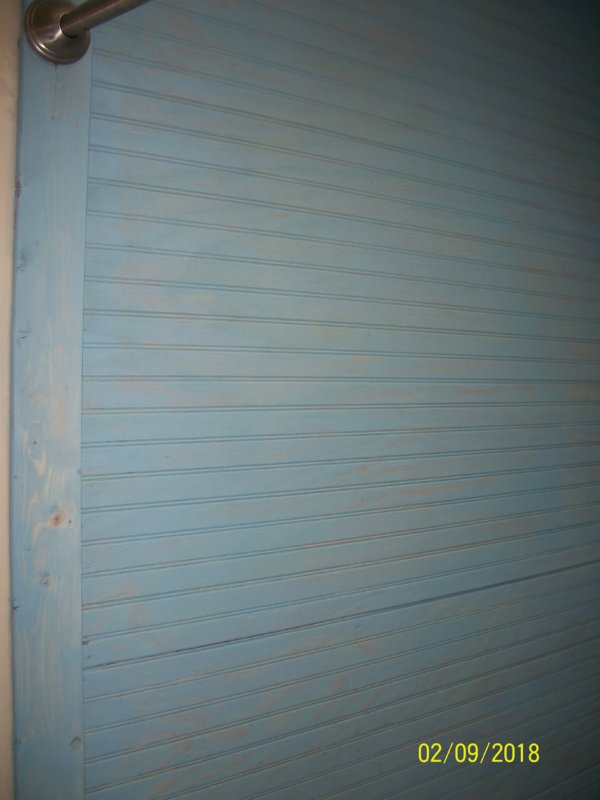 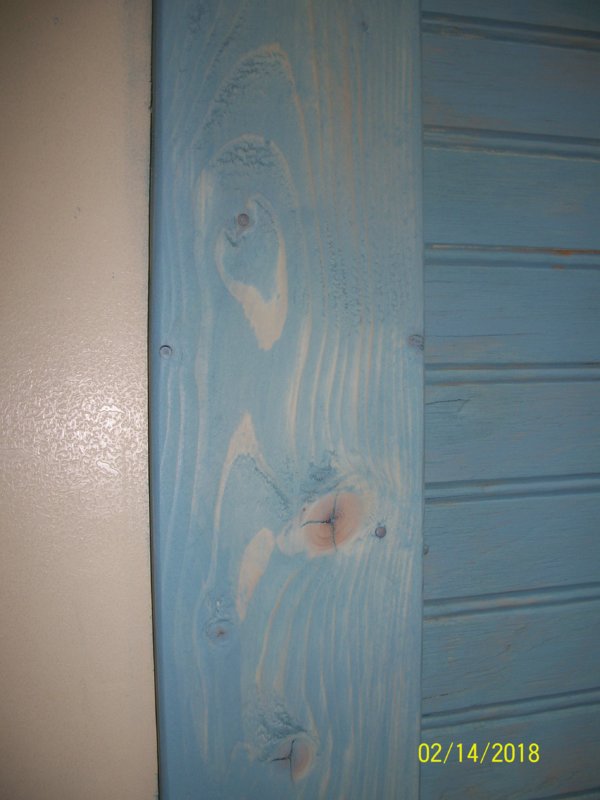 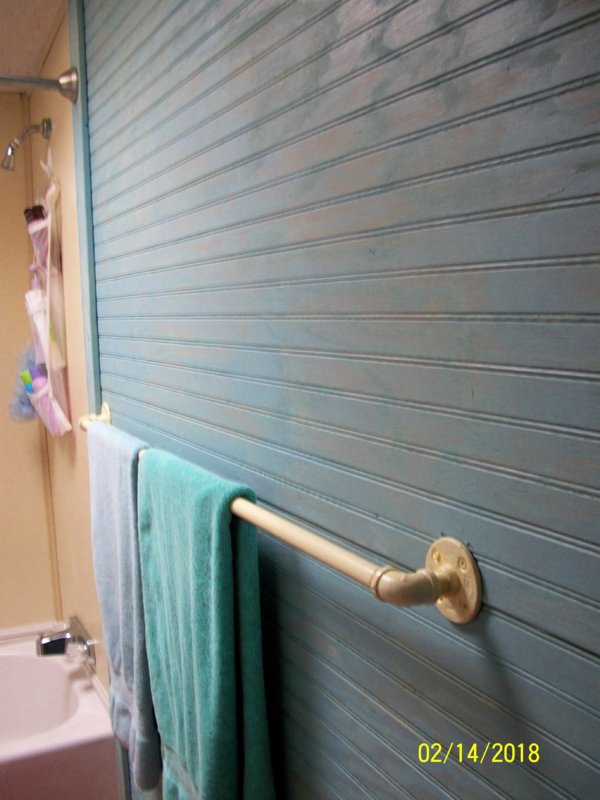 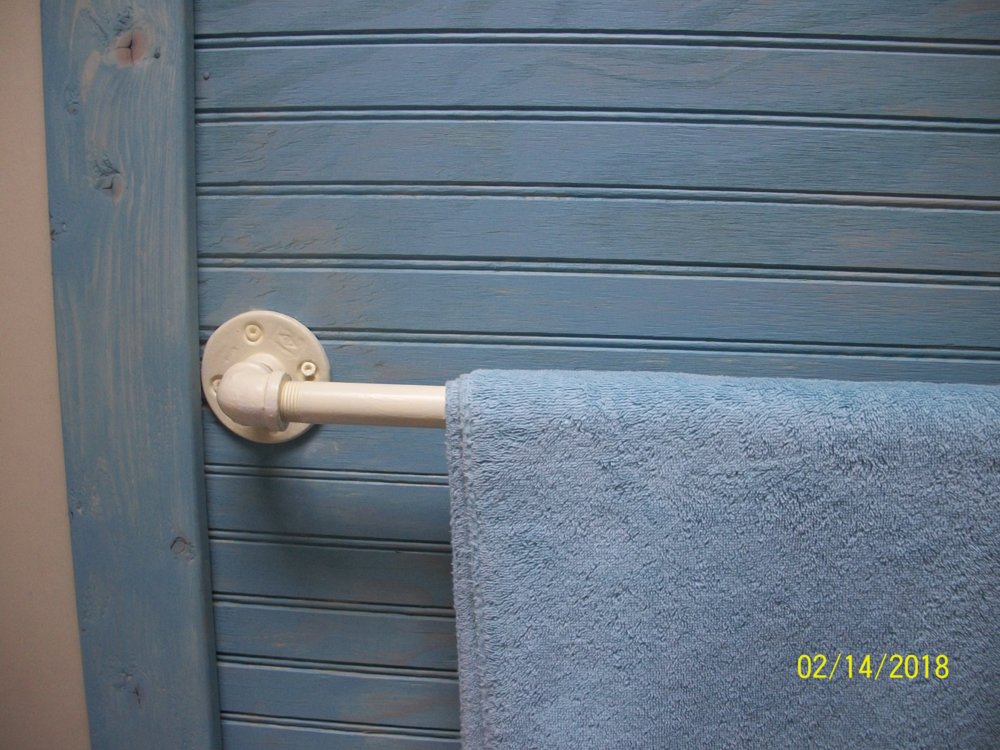 I've yet to place decoration back on that wall...will bide my time and choose the right thing that goes with this "weathered" wall.

Didn't start out to be a bathroom redo, but just a tub replacement. Then it morphed into getting that wall covered...the old towel bars were from the early 90s and had to be glued onto that old wall for the lack of stud placement to support their length, so that necessitated new towel rod.

Then, the vanity naturally needed a fresh paint job to coordinate with the new paint on the opposite wall, which led me to take a fresh look at the old mirror...it's has age spots and is seriously dated from the 80s and 90s. I figured I could replace it and frame it out with pine board framing covered in the same wash to marry those two walls.

After that I was looking at the over the commode shelving unit...a flimsy nickel brushed metal thing that looks out of place in there and never really did do a great job of holding all the things it needs to hold...so I got to thinking, shelving with the same blue wash to further marry those two walls.

In the end, it's sort of a mini makeover of this tiny trailer bathroom. I'm seriously LOVING the blue wall and it makes me smile every time I walk in there. The new white tub adds a brightness to the room it never had and matches the white commode and sink, so that's all good.

I painted the trim around the window over the tub in the same blue color, though not the wash...just straight paint. It really adds a little pop of color in that end of the room and brings it all into the new blue theme. I already had towels in varying shades of blue, the vanity top is blue, and the shower curtain has blues in it, so I'm calling the bathroom the "Fifty Shades of Blue" room now. Not a single shade of blue matches the other but they GO, if you know what I mean.

It looks really nice and I love that blue wall!

So, since the garden is in growth mode and not much to be done there, I have time for projects...if I can ever get enough time out of the house between rain showers. It's been an interesting month, to say the least.

I've had a wooden youth bed frame under this carport for a year now, awaiting project day....was going to turn it into a swing or glider for the girls. Today was that day...and the girls were out here to "help" me do it. Always fun to have that kind of help...slows things down but they get to be a part of it all.

Got the swing portion done and it's cute as a bug...just need to get some treated wood to complete the frame~I'd use stickers but they are a tad clunky compared to the slender wood of the glider, so I'm thinking to get more appropriate sized boards to finish this. Except for one board, the swing portion is comprised entirely of the bed frame and that tickles me...I had very little scraps left over.

Aliza wants to paint it pink but that's not going to "go" with our outdoor color theme here...she's really into pink right now. So, I'm going to try to find something more along the lines of "raspberry pink" rather than Barbie pink like she's liking right now.

Will post pics of it upon completion and painting. I'm thinking about making a pad for it too, though I'd have to store that pad in the playhouse until the girls come out to use the glider swing.

Currently turning a youth/toddler bed frame and some old table legs into a child's glider swing. Will post pics when done.

Trying to clear the carport out of my various materials intended for repurposing or refurbishing.

It's done.... swing/glider I built from the legs of an old table and a wooden toddler bed frame we got at GW for $10. Other than paint and hardware, that's all that's in it. The frame has been sitting under my carport for a year, awaiting a new life and now it's got one. I modeled the design after an old glider we have in front of the garden as much as I could.

Got a few safety adjustments I want to make on it, but for now it's mostly finished.

Oh, and that color? Grandgirl said she wanted it pink. My son says it looks like Barbie puke, but she'll be pretty happy with it.

I didn't like the instability of the glider setup, so turned the glider into a swing instead...I think the girls will like it better this way too.

Hung it by their playhouse. 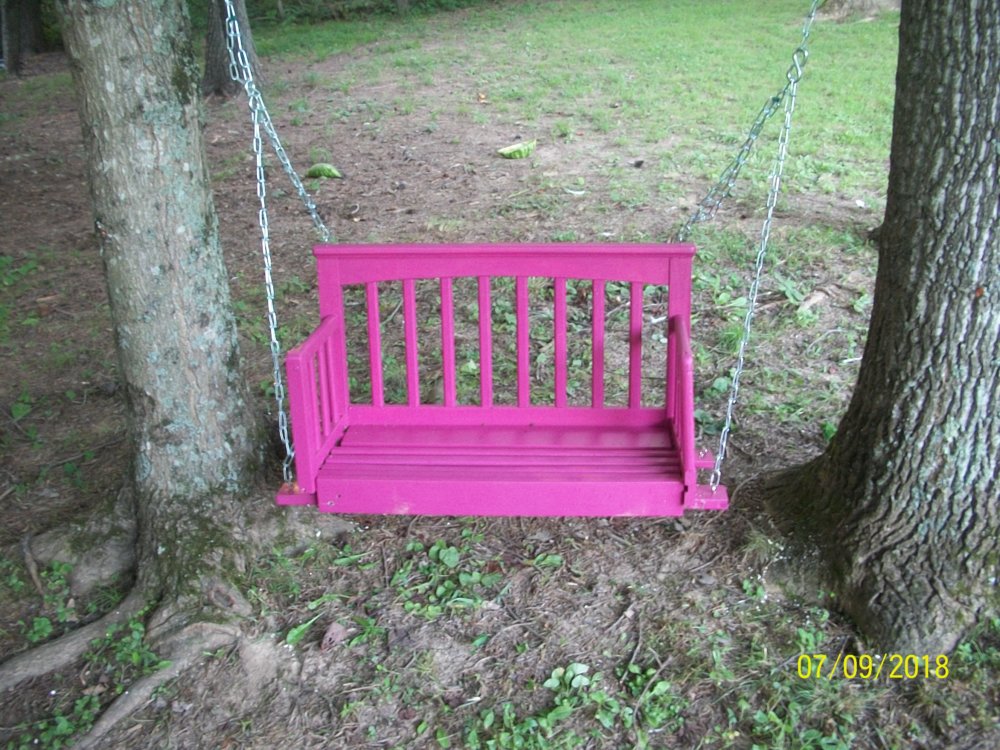 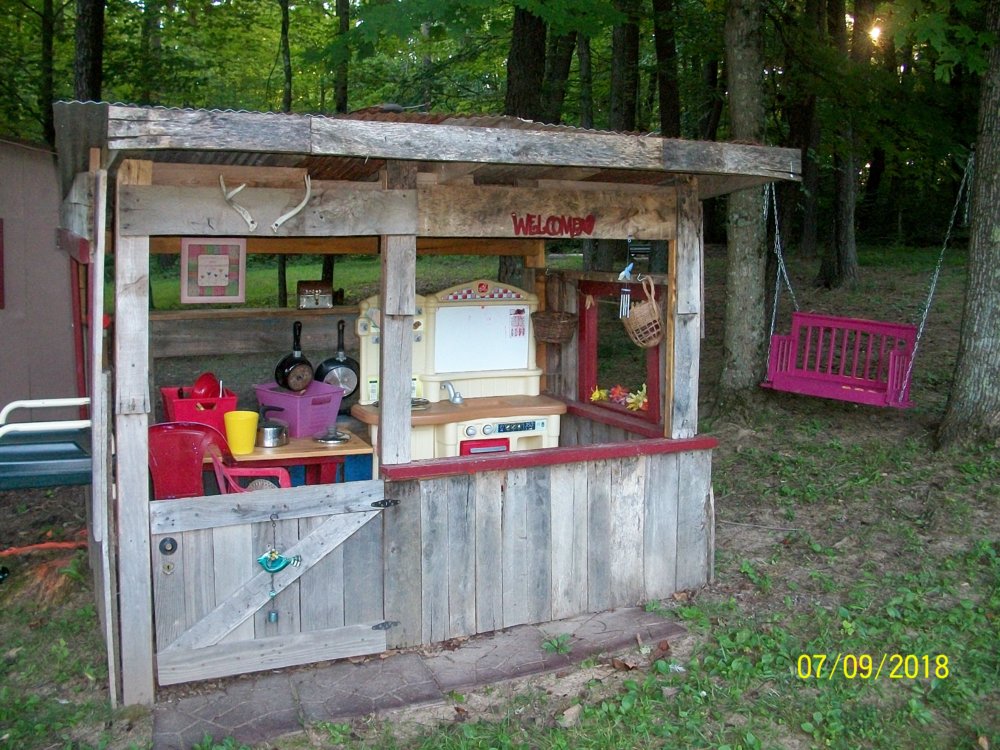 Lately been at the DIY again. This time doing a makeover of my bedroom. Bumping out a bay window seat that was too narrow for good use for sitting and revamping the huge closet in that room...runs the whole width of the room but hasn't been used for much but storing odds and ends for years now. My clothes only take up about 2 ft of space, so the rest has just been a clutter of mess.

Removed a chest of drawers and will remove a platform rocker from that room. Removed four large totes/baskets of pictures...they will be sorted and disposed of to various places.

Will be making a free standing shelf in the other end of the closet from an old wooden ladder that's seen better days. Will tilt those shelves to hold baskets for the grandgirl's clothing to take the place of that chest of drawers.

The whole room will get a new paint job, new window treatments, and, eventually, new carpeting. Will frame out the cut outs we did in that closet to reach the bathroom plumbing, to make those more accessible in the future and to give it a more finished look there.

All of this is my December project, along with the continued splitting of firewood.
C

You do stay busy beekissed. I put a new metal roof on during thanksgiving break. I took a few extra days off work. Will have to fix all the penatrations during Christmas or whenever I get laid off. Haven't been home since early July and didn't have the money then. I put the tin over the shingles with another layer of felt paper (probably unnecessary) and left for work again. Being gone sucks, but after the last few years of being home AND broke I have to stay busy for awhile to play catch up.
You must log in or register to reply here.
Share:
Facebook Twitter Reddit Pinterest Tumblr WhatsApp Email Link